You are here: Home / Climate Science / The number of tropical cyclones in the North Atlantic

A natural question then is whether we can expect this high number in the future or if the number of tropical storms will continue to increase. A high number of such events is equivalent to a high frequency of tropical cyclones.

But we should expect fewer tropical cyclones generally in a warmer world according to the IPCC “SREX” report from 2012, and those that form may become even more powerful than the ones that we have observed to date:

There is generally low confidence in projections of changes in extreme winds because of the relatively few studies of projected extreme winds, and shortcomings in the simulation of these events. An exception is mean tropical cyclone maximum wind speed, which is likely to increase, although increases may not occur in all ocean basins. It is likely that the global frequency of tropical cyclones will either decrease or remain essentially unchanged…

So how does this conclusion relate to the number of tropical cyclones in the North Atlantic with a new record this season? One reason to look in more detail at the North Atlantic is because its observational record is believed to be more complete and more reliable than for other regions around the world.

The observational record may also suggest that the number of tropical cyclones in the North Atlantic has increased slowly over the 50 years in addition to year-to-year fluctuations around this trend (black symbols in Fig 1).

We know that the number of cyclones is sensitive to the time of the year (hence, hurricane seasons), phenomena such as El Niño Southern Oscillation (ENSO) and the Madden Julian Oscillation (MJO), and geography (the ocean basin shape and the latitude). We also know that the sea surface needs to be warmer than 26.5°C for them to form.

The role of sea surface temperature is indeed an important factor, and from physical reasoning, one would think that the number of tropical cyclones depends on the area of warm sea surface

One explanation for why the area is a key factor may be that the probability of finding favourable conditions with right ‘seed’ for organised convection (e.g. easterly waves) and no wind shear increases when there is a greater region with sufficient sea surface temperatures.

The area of warm sea surface is mentioned in the IPCC SREX that dismisses the expectation that an increase in the area extent of the region of 26°C sea surface temperature should lead to increases in tropical cyclone frequency. Specifically it says that there is

a growing body of evidence that the minimum SST [sea surface temperature] threshold for tropical cyclogenesis increases at about the same rate as the SST increase due solely to greenhouse gas forcing.

On the other hand, there has also been some indication that the number of tropical cyclones does seem to be proportional to the area to the power of 5:

(Benestad, 2008). When this relationship is extended to recent years, as shown with the green and blue curves in Fig 1, we see an increase that this crude estimate more or less follows the observed number of evens.

Global warming implies a greater area with sea surface exceeding the threshold of 26.5°C for tropical cyclone genesis. Also, the nonlinear dependency to

implies few events and little trend as long as

is below a critical size. The combination of a nonlinear relationship and a critical threshold area could explain why it is difficult to detect a trend in the historical data.

There is some good news in that

is limited by the geometry of the ocean basin. Nevertheless, a potential nonlinear connection between the number of tropical cyclones and

is a concern. If this cannot be falsified, then the tropical cyclones represent a more potent danger than anticipated by the IPCC SREX conclusions. So let’s hope that somebody is able to show that the analysis presented in (Benestad, 2008) is wrong. 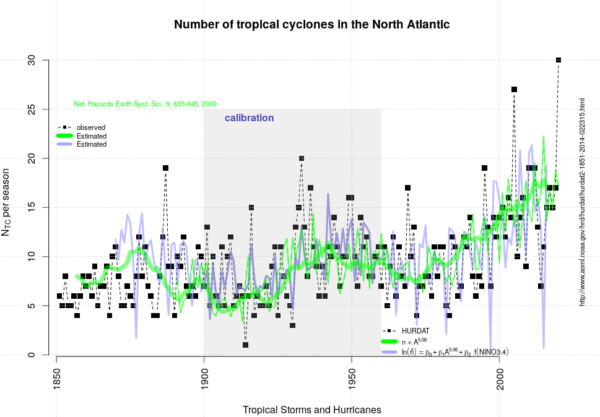