The recent paper in Science Express by Hansen et al (on which I am a co-author) has garnered quite a lot of press attention and has been described as the ‘smoking gun’ for anthropogenic climate change. We have discussed many of the relevant issues here before, but it may be useful to go over the arguments again here.

The key points of the paper are that: i) model simulations with 20th century forcings are able to match the surface air temperature record, ii) they also match the measured changes of ocean heat content over the last decade, iii) the implied planetary imbalance (the amount of excess energy the Earth is currently absorbing) which is roughly equal to the ocean heat uptake, is significant and growing, and iv) this implies both that there is significant heating “in the pipeline”, and that there is an important lag in the climate’s full response to changes in the forcing.

As we have discussed previously, looking in the ocean for climate change is a very good idea. Since the heat capacity of the land surface is so small compared to the ocean, any significant imbalance in the planetary radiation budget (the solar in minus the longwave out) must end up increasing the heat content in the ocean. This idea was explored by Levitus et al (long term observations of ocean heat content) and Barnett et al (modelling of such changes) in a couple of Science papers a few years ago. Since then, the models have got better (for instance, coupled models generally do not require ‘flux corrections’ to prevent excessive model drift any more), and the estimates of ocean heat changes, particularly over the last ten years have improved enourmously. The observational improvements come from incorporating satellite altimeter data (which mainly reflects changes in heat content) and, more recently, the ARGOS float network which is providing unparallelled coverage in sub-surface waters (particularly in the southern oceans). This implies that the estimates of ocean heat content changes over the last 10 years are the most accurate that we have had to date and thus provide a good target to compare against the models. 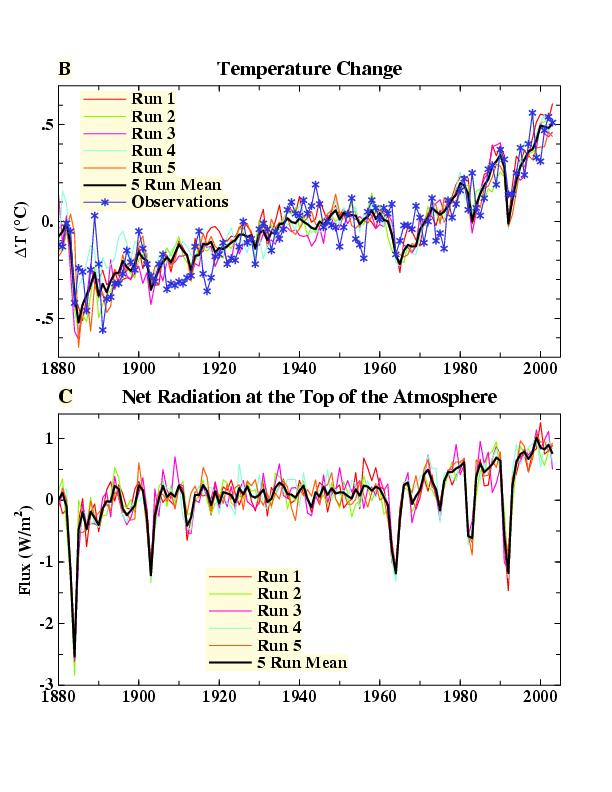 For their part, the model simulations that have been run for the IPCC AR4 have tried to simulate the climate of the last hundred or so years using only known and quantifiable forcings. Some of these forcings are well known and understood (such as the well-mixed greenhouse gases, or recent volcanic effects), while others have an uncertain magnitude (solar), and/or uncertain distributions in space and time (aerosols, tropospheric ozone etc.), or uncertain physics (land use change, aerosol indirect effects etc.). Given these uncertainties, modellers nevertheless make their best estimates consistent with observations of the actual forcing agents. The test for the modellers is whether they reproduce many of the elements of climate change over that period. Some tests are relatively easy to pass – for instance, we have discussed the model skill in response to the Mt. Pinatubo eruption in a number of threads.

The overall global surface temperature is also well modelled in this and other studies. While impressive, this may be due to an error in the forcings combined with compensating errors in the climate sensitivity (2.7 C for a doubling of CO2 in this model) or the mixing of heat into the deep ocean. Looking at the surface temperature and the ocean heat content changes together though allows us to pin down the total unrealised forcing (the net radiation imbalance) and demonstrate that the models are consistent with both the surface and ocean changes. It is still however conceivable that a different combination of the aerosol forcing (in particular (no pun intended!)) and climate sensitivity may give the same result, underlining the continuing need to improve the independent estimates of the forcings.

So how well does the model do? The figure shows the increase in heat content for 5 different simulations in the ensemble (same climate forcings, but with different weather) matched up against the observations. All lines show approximately the same trend, and the variability between the ensemble runs being greater than the difference with the observations (i.e. this is as good a match as could be expected). 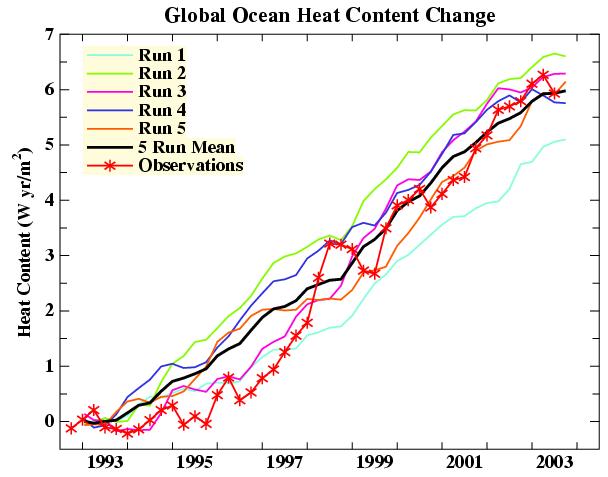 The interannual variability, predominantly related to ENSO processes, is different but that too is to be expected given the mainly chaotic nature of tropical Pacific variability, the short time period and the models’ known inadequacy in ENSO modelling. The slope of these lines is then related to the net heat imbalance of around 0.60+/-0.10W/m2 over 1993-2003, and which the models now suggest has grown to around 0.85+/-0.15 W/m2. The distribution of heat in the ocean in the different runs is quite large (figure 3 in the article) but clearly spans the variations in the observations, which is of course just one realisition of the actual climate.

What does this imply? Firstly, as surface temperatures and the ocean heat content are rising together, it almost certainly rules out intrinsic variability of the climate system as a major cause for the recent warming (since internal climate changes (ENSO, thermohaline variability, etc.) are related to transfers of heat around the system, atmospheric warming would only occur with energy from somewhere else (i.e. the ocean) which would then need to be cooling).

Secondly, since the ocean warming is shown to be consistent with the land surface changes, this helps validate the surface temperature record, which is then unlikely to be purely an artifact of urban biases etc. Thirdly, since the current unrealised warming “in the pipeline” is related to the net imbalance, 0.85+/-0.15 W/m2 implies an further warming of around 0.5-0.7 C, regardless of future emission increases. This implications are similar to the conclusions discussed recently by Wigely and Meehl et al.. Many different models have now demonstrated that our understanding of current forcings, long-term observations of the land surface and ocean temperature changes and the canonical estimates of climate forcing are all consistent within the uncertainties. Thus since we are reasonably confident in what has happened in the recent past, projections of these same models under plausible future scenarios need to be considered seriously.