by Michael Mann and Gavin Schmidt

Roughly a year ago, we summarized the state of play in the ongoing scientific debate over the role of anthropogenic climate change in the observed trends in hurricane activity. This debate (as carefully outlined by Curry et al recently) revolves around a number of elements – whether the hurricane (or tropical cyclone) data show any significant variations, what those variations are linked to, and whether our understanding of the physics of tropical storms is sufficient to explain those links.

Several recent studies such as Emanuel (2005 — previously discussed here) and Hoyos et al (2006 — previously discussed here) have emphasized the role of increasing tropical sea surface temperatures (SSTs) on recent increases in hurricane intensities, both globally and for the Atlantic. The publication this week of a comprehensive paper by Santer et al provides an opportunity to assess the key middle question – to what can we attribute the relevant changes in tropical SSTs? And in particular, what can we say about Atlantic SSTs where we have the best data?

This role of SST remains pivotal in understanding long-term trends in hurricane activity, regardless of whether the SST increases are natural or anthropogenic in origin. Mann and Emanuel (2006) noted that once SST is accounted for as a factor, there is no apparent multidecadal signal in long-term hurricane numbers, regardless of what that signal might be (i.e., SST, wind sheer, or any other factors that potentially influence activity). Other studies (e.g. Bell and Chelliah, 2006) generally agree that the ‘memory’ of any multi-decadal osillation (whether forced or natural) lies in the ocean, and atmospheric simulations using observed SST data in the Atlantic reproduce many of the observed correlations (Zhang and Delworth, 2006). So understanding the origin of the warming SSTs is central to understanding changes in hurricane behavior.

The essential question, then, is what has caused the long-term SST changes? This question is sometimes reduced to the ‘straw man’ of whether tropical SSTs trends (which are very clear in the data) are internal (i.e., due to a natural oscillation of the climate system) or anthropogenic (i.e. forced by some combination of human-related causes)? Of course, this is a over-simplification since there always at least some role for internal variability. So a more useful question is to what extent SST changes can be attributed to various possible causes.

In the Atlantic, the proposition advanced by some is that a natural oscillation known as the Atlantic Multidecadal Oscillation (AMO) is responsible for the observed trends in SST (and by extension, North Atlantic hurricane activity). To examine that question requires a clear analysis of the data, and examination of what models suggest regarding the likely amplitude, spatial extent and physical mechanisms underlying this oscillation.

First of all, how is the AMO defined? It is intrinsically quite difficult to detect any multidecadal oscillation in roughly only one century of instrumental data. Simply put, separating an oscillation from trend becomes exceedingly tricky (and increasingly dependent on statistical assumptions) as the timescale of the oscillation approaches the length of the record. Unfortunately, this situation holds for the AMO, which has been attributed periodicities anywhere from 40-100 years, the latter approaching the length of available instrumental climate observations. In some earlier studies, the AMO was defined using multivariate signal detection procedures to tease oscillatory patterns apart from long-term (potentially non-linear) trends (e.g. Mann and Park, 1994) or using climate model-based estimates of forced trends to estimate a possible residual oscillatory component (e.g. Schlesinger and Ramankutty, 1994).

In some more recent studies, however, the AMO has been defined simply as the residual low-frequency pattern after linear detrending of SST observations (e.g. Goldenberg et al, 2001). The linear detrending is intended to remove any potential forced signal, under the assumption that it is linear in time. However, if the forced signal is not linear, then this procedure can produce a false apparent ‘oscillation’ purely as an artifact of the aliasing of the non-linear secular trend (Trenberth and Shea , 2006). In fact, we have very strong indications for the 20th Century that the forcings over that period have not varied in a smooth, linear fashion.

Because of the procedural difficulties in isolating the AMO signal in the instrumental record, the estimated attributes of the signal are quite sensitive to how it is defined. The earlier studies mentioned above (i.e., Mann and Park, 1994; Schlesinger and Ramankutty, 1994) found an AMO signal with a large projection onto high-latitude North Atlantic SST variations, but little projection onto tropical North Atlantic SST. This contrasts with studies using the linear detrending procedure described above, which indicate a sizeable impact of the AMO on tropical North Atlantic SST.

In a regression analysis using instrumental observations, Emanuel and Mann (2006) find that the estimated temporal history of the anthropogenic climate change signal in tropical North Atlantic SST superficially resembles the temporal pattern often ascribed to the AMO (i.e., early 20th century and 1960s-1980s cool phases, and 1930s-1950s and recent warm phase). However, they identify this irregular warming pattern with a combination of greenhouse gas warming influences and late 20th century sulphate aerosol cooling influences (which are especially large during the late boreal summer in the tropical Atlantic). It is therefore likely that the non-linear temporal history of anthropogenic tropical Atlantic warming has masquaraded as the ‘AMO’ in some studies.

Does the AMO even exist as a climate phenomenon absent the complications in detecting the signal in actual observations? Here the answer is probably yes. Within coupled models, enhanced multi-decadal variability with an apparent origin in Atlantic ocean-atmosphere dynamics, does occur. This was shown in work published in the early 1990s by Delworth and collaborators using the GFDL coupled ocean-atmosphere model (see the update and review in Delworth and Mann, 2000), and in more recent work by Knight et al (2005 and 2006) with the Hadley Centre coupled model. This AMO signal, in the model simulations, is associated with oscillatory variations in the meridional overturning circulation such that when the overturning is stronger than normal, there is a warming pattern in the North Atlantic (and vice versa). However, the warming in the model simulations is largely confined to the extratropical North Atlantic, with only a small (roughly 0.1 C maximum) projection onto the Main Development Region (MDR) for Atlantic hurricanes. The model simulation results therefore appear consistent with those analyses of observations which find that the AMO signal does not have a substantial projection onto tropical Atlantic SST. This does not mean that the AMO could not in principle influence tropical Atlantic Hurricane activity. In fact, detailed analyses of both the GFDL and Hadley Centre simulations indicate that the AMO is associated with moderate changes in wind sheer in the tropical Atlantic, which could potentially influence Atlantic hurricane activity. However, as discussed earlier, a number of studies find that it is the SSTs that have played the primary role in the observed increases in hurricane intensities in recent decades. 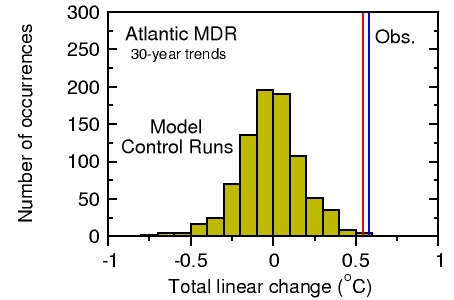 An alternative approach to the problem is a formal ‘detection and attribution’ analysis which seeks to establish the role of a potentially forced signal in the midst of climate ‘noise’. This is where the new Santer et al paper comes in. Here, the authors examine the model simulations for the 20th Century that were coordinated for the IPCC AR4 and which now form a very valuable database that can be used in addressing issues such as those which concern us here. For each of the models, the trends in key Atlantic and Pacific regions can be compared in the runs with and without forcing. Assuming for the moment that the models produce a reasonable approximation for the naturally occurring decadal variability, it can easily be seen whether a) the trends in the models are similar to those in the real world, and b) to what extent they can be explained by the forcings. In the Santer et al study, they find that the model trends when driven with the 20th Century forcings do match the observations, and moreover, are clearly larger than can be explained by internal variations (see the figure extracted from Figure 2 of their paper). Interestingly, the study also supports the observation-based finding of Emanuel and Mann (2006) that sulphate aerosols are likely to have masked a significant component of the late 20th century tropical Atlantic greenhouse warming.

But do the models produce a reasonable amplitude of internal variability? This is a difficult question to answer because it can’t be easily deduced from the climate record (since there are many forcings, some natural, some anthropogenic) that are potentially obscuring the internal signal. However, over the period when we have good data, we can certainly check whether the models amplitude of variability is in the ball park of the observations. Santer et al did this as well, and find that indeed, there is no reason to think that models as a whole are systematically underestimate the internal component. One of the advantages of the IPCC AR4 data is that with so many models participating (22 models here), there will be a range of results – some models have more variability than observed, others less. A robust conclusion can therefore be drawn if the signals are clear regardless of the magnitude of any one models’ representation of the internal variability. (Santer et al have posted an illuminating Q&A on their study that discusses this point further.)

This result (and an associated paper by Knutson et al who look in more detail at the GFDL simulations) is particularly notable because among the models they look at at precisely the GFDL and HadCM3 models known to generate the ‘AMO’ in control simulations. Thus even in those models which exhibit oscillatory ‘AMO’ behavior, the observed tropical SST trends can only be explained when anthropogenic forcing is included.

In total, at least four studies, two based entirely on analyses of observations, and the other two based on climate model simulations, independently come to the conclusion that warming tropical Atlantic and Pacific SSTs cannot be purely attributed to any natural oscillation. These studies do not conclusively show a hurricane/global warming link, let alone determine what it’s magnitude might be, but they do strengthen one pillar of that linkage.