You are here: Home / Climate Science / A Linkage Between the LIA and Gulf Stream?

Surface temperatures in parts of Europe appear to have have averaged nearly 1°C below the 20th century mean during multidecadal intervals of the late 16th and late 17th century (and with even more extreme coolness for individual years), though most reconstructions indicate less than 0.5°C cooling relative to 20th century mean conditions for the Northern Hemisphere as a whole. There is much less data during these time intervals for the Southern Hemisphere, and that severely limits what conclusions can be drawn there. Just what combination of factors could explain this pattern of observations has remained somewhat enigmatic. A new ingredient in this debate comes with a recent paper in Nature by Lund et al. 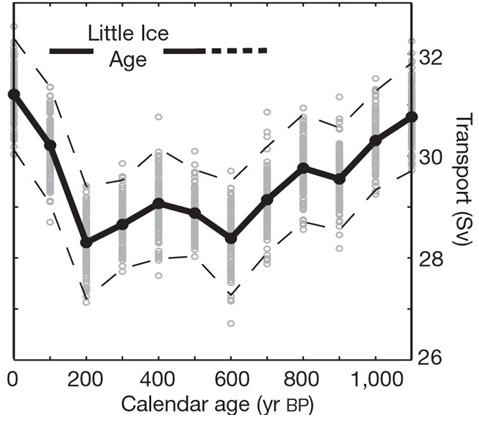 Their study uses oxygen isotopes records from foraminifera (small zooplankton) contained within a set of long sediment cores taken off the coast of Florida to infer past changes in currents through the Florida Straits, which represents part of the greater “Gulf Stream” current system. This method is based on the observation that the isotope values are proportional to the water density, and as with the geostrophic calculations that are the basis of ocean transport estimates today, changes in isotope gradients across the strait should tell us something about the strength of the currents. They conclude that the Gulf Stream (at least, the portion of it which travels through the Florida Straits) may have been weaker by about 10% during the broad period (AD 1200-1850) commonly associated with the LIA (see figure, and note the time goes backward). The time resolution of the records doesn’t really allow for a much more precise chronology.

Such changes would have little if any impact on global mean temperatures, and only a modest impact on Northern Hemisphere mean temperatures, though they would have a more substantial impact on North Atlantic Sea Surface Temperatures (SSTs) – possibly up to a degree in some locations. This could help to explain the evidence for greater cooling during that period during the LIA in the North Atlantic and surrounding regions This possibility was touched upon in one news article about the study that appeared in The New Scientist.

How does this fit in with the ideas put forward in other related recent studies? For example, Shindell et al (Science, 2001) showed model results that suggested solar forcing could lead to enhanced winter cooling over certain regions of the Northern Hemisphere such as Europe during the Late Maunder Minimum (the coolest part of the European “Little Ice Age”, the late 17th and early 18th centuries). The mechanism involves the large-scale dynamical response of the atmosphere to the estimated decrease in solar irradiance and subsequent stratospheric ozone change. The response was associated with a shift towards the negative phase of the so-called North Atlantic Oscillation (NAO)/Arctic Oscillation (AO) which projects onto a pattern of regional warmth and coldness that tends to cancel out in an average over the entire Northern Hemisphere. There is supporting evidence for this idea based on widespread proxy evidence for a negative phase of the NAO during late 17th and early 18th century intervals.

In that paper, the Northern Hemisphere temperatures cooled only modestly (at most a few tenths of a degree C) in response to the associated radiative forcing (lowered solar irradiance). A similar argument holds for the impacts of explosive volcanism, as shown in subsequent work by Shindell and colleagues (including us). However, the dynamical response associated with the NAO/AO pattern, which sits on top of the radiative response, leads to greater cooling in some regions at the expense of less cooling (or even warming) in other regions. This mechanism could explain the enhanced cooling in Europe for instance, but it cannot easily explain the additional evidence for an overall cooling of North Atlantic SST at this time. Shindell et al (2001) alluded, however, to the possibility that a sustained negative phase of the NAO would lead to a minor weakening of the North Atlantic meridional overturning circulation,

The GISS model results and empirical reconstructions both suggest that solar-forced regional climate changes during the Maunder Minimum appeared predominantly as a shift toward the low AO/NAO index. Although global average temperature changes were small, modeled regional cooling over the continents during winter was up to five times greater. Changes in ocean circulation were not considered in this model. However, given the sensitivity of the North Atlantic to AO/NAO forcing (37–Delworth and Dixon, J. Climate, 2000), oceanic changes may well have been triggered as a response to the atmospheric changes (38–Broecker, PNAS, 2000). Such oceanic changes would themselves further modify the pattern of SST in the North Atlantic (39–Visbeck et al, 1999) and, to a lesser extent, the downstream air temperature anomalies in Europe.

Jones and Mann later expanded on this point in a review paper published in 2004 in the journal Reviews of Geophysics (see final paragraph of section 5.3 therein). The argument basically goes as follows: a sustained forced negative state of the NAO pattern would lead, based on the experiments done by Delworth and Dixon (2000), to a small, but detectable [1-2 Sverdrups (‘Sv’) – or about 5-10%) decrease in the North Atlantic meridional overturning circulation (MOC), which in turn would lead to an additional pattern of cooling over the North Atlantic during the height of the LIA. This seems consistent with the small change in the strength of the “Gulf Stream” inferred by Lund et al study for the LIA.

An alternative view would suggest that rather than the MOC being a consequence of radiative and subsequent atmospheric change, it was in fact the sole factor and that this observed shift was just part of a multi-centennial oscillation. That implies that the southern Atlantic might be expected to warm slightly instead of cool and that the peak cooling would be in the North Atlantic rather than further afield. Of course, it is also conceivable that some combination of both mechanisms are required to explain the observed changes.

We look forward to further research that might further test these intriguing hypotheses.

57 Responses to "A Linkage Between the LIA and Gulf Stream?"