Just when we were beginning to think the media had finally learned to tell a hawk from a handsaw when covering global warming (at least when the wind blows southerly), along comes this article ‘In Ancient Fossils, Seeds of a New Debate on Warming’ by the New York Times’ William Broad. This article is far from the standard of excellence in reporting we have come to expect from the Times. We sincerely hope it’s an aberration, and not indicative of the best Mr. Broad has to offer.

Broad’s article deals with the implications of research on climate change over the broad sweep of the Phanerozoic — the past half billion years of Earth history during which fossil animals and plants are found. The past two million years (the Pleistocene and Holocene) are a subdivision of the Phanerozoic, but the focus of the article is on the earlier part of the era. Evidently, what prompts this article is the amount of attention being given to paleoclimate data in the forthcoming AR4 report of the IPCC. The article manages to give the impression that the implications of deep-time paleoclimate haven’t previously been taken into account in thinking about the mechanisms of climate change, whereas in fact this has been a central preoccupation of the field for decades. It’s not even true that this is the first time the IPCC report has made use of paleoclimate data; references to past climates can be found many places in the Third Assessment Report. What is new is that paleoclimate finally gets a chapter of its own (but one that, understandably, concentrates more on the well-documented Pleistocene than on deep time). The worst fault of the article, though, is that it leaves the reader with the impression that there is something in the deep time Phanerozoic climate record that fundamentally challenges the physics linking planetary temperature to CO2. This is utterly false, and deeply misleading. The Phanerozoic does pose puzzles, and there’s something going on there we plainly don’t understand. However, the shortcomings of understanding are not of a nature as to seriously challenge the CO2.-climate connection as it plays out at present and in the next few centuries.

The use of the more recent Pleistocene and Holocene record to directly test climate sensitivity presents severe enough difficulties (discussed, for example, here), but the difficulties of using deep-time Phanerozoic reconstructions for this purpose make the Pleistocene look like childs’ play. The chief difficulty is that our knowledge of what the CO2. levels actually were in the distant past is exceedingly poor. This situation contrasts with the past million years or so, during which we have accurate CO2. reconstructions from ancient air trapped in the Antarctic ice. Obviously, if you don’t know much about how CO2. is changing, you are poorly placed to infer its influence on climate, even if you know the climate perfectly and nothing else is going on besides variation of CO2.. But, neither of these latter two conditions are true either. Our knowledge of climates of the distant past is sketchy at best. Even for the comparatively well-characterized climates of the past 60 million years, there have been substantial recent revisions to the estimates of both tropical (Pearson et al., Nature 2001) and polar (Sluijs et al, Nature 2006) climates. Most importantly, one must recognize that while CO2. and other greenhouse gases are a major determinant of climate, they are far from the only determinant, and the farther back in time one goes, the more one must contend with confounding influences which muddy the picture of causality. For example, over time scales of hundreds of millions of years, continental drift radically affects climate by altering the amount of polar land on which ice sheets can form, and by altering the configuration of ocean basins and the corresponding ocean circulation patterns. This affects the deep-time climate and can obscure the CO2-climate connection (see Donnadieu, Pierrehumbert, Jacob and Fluteau, EPSL 2006), but continental drift plays no role whatsoever in determining climate changes over the next few centuries.

Let’s take a closer look at the question of CO2 variations over deep time. In contrast to the situation for the late Pleistocene, there is no one method for reconstructing CO2 at earlier times which is fully satisfactory. Methods range from looking at carbon isotopes in microfossils to looking at the density of pores on fossil leaves, with many other exotic geochemical tracers (e.g Boron) coming in in recent times. There is also some data for the very early Earth associated with the CO2 conditions under which certain exotic minerals (uraninites and siderites) form. None of the methods is unambiguous, and none provide information about other greenhouse gases that might be playing a role (though there may be some hope to do something abou methane). As an example of the difficulty faced by the field, take a look at the compilation of various estimates of CO2 since the Permian presented in the following figure (From Donnadieu et al, G3, in press; the red squares come from an attempted geochemical model fit to the data. The data set comes from Royer et al. (2004) and is available here). 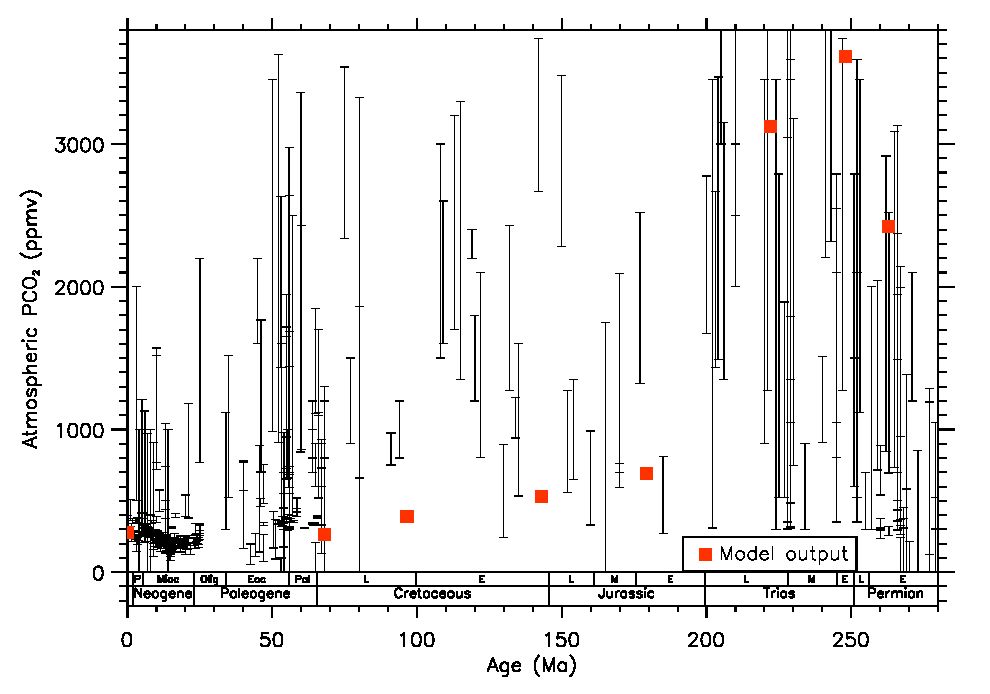 By the time one gets back to the Permian, the error bars are huge. At earlier times, the estimates are even more problematic. Broad’s article does make reference to a very interesting paper by MIT’s Dan Rothman, writing in PNAS. This paper attempts a peek at the CO2 over the past 500 million years, using a clever and novel reconstruction technique. It is innovative, but far from the last word on the subject. Broad inappropriately cherry-picks Rothman’s statement that there appears to be no clear connection between warm climates and CO2 (except in "recent" times, about which more anon). However, Broad’s article neglects all the caveats in the paper, which clearly point to the real problem being that the reconstructions of CO2 and climate over such time scales are so uncertain that it’s not clear that the data is up to the task of teasing out ssuch a connection.

Even in Rothman’s reconstruction, during the past 50 milllion years — when the data is best and continents are most like the present — the long term cooling trend leading into the Pleistocene is clearly associated with a long term CO2 decline. This is not our main reason to infer that increasing CO2 will warm the climate in the future, but insofar as the data supports CO2 decline as a main culprit in the long slide from the Cretaceous hothouse climates of 60 million years ago to the cold Pleistocene climate, it also lends weight to the notion that as industrial activity busily restores CO2 to levels approaching those of the Cretaceous, climate is likely to turn the climate clock back 60 million years as well. From Broad’s flip dismissal of the CO2-climate connection in the "recent" part of the record, the reader would never guess at the length and particular significance of this period.

And then, too, the tired old beast of Galactic Cosmic Rays (GCR) raises its hoary head in Broad’s article. The GCR issue has been extensively discussed elsewhere on RealClimate (e.g. here and here) On one level the GCR idea is another instance of the problem that Phanerozoic climate variations may have had many causes, giving rise to a false appearance of decorrelation between climate and CO2. Whatever role GCR may have played in deep time climate, the climate of the past century and its attribution to CO2 is a wholly different kettle of fish, since in modern times we have direct observations of GCR and they are not doing anything of a sort that would cause the observed warming — to say nothing of the fact that one would still have to argue away the basic radiative physics which makes CO2 affect the planet’s radiation budget. We repeat: There has been no recent trend in cosmic rays that could conceivably account for the recent warming, even if the GCR proponents were right about the physical mechanism underpinning their theory. This is made abundantly clear in this recently published article. Further, whatever was going on in the past, the present observations do not support the supposed cloud-GCR connection that is supposed to mediate the climate effect. That’s not the end of the story, for there are also severe methodological difficulties in the way the GCR proponents have attributed Phanerozoic change to GCR rather than CO2, and also severe conceptual difficulties in the supposed physical link between clouds and GCR.. Some of these difficulties may ultimately be resolved and allow a more fair test of the possibility that GCR influences played some role in the past. Surely, the play given to Veizer and Shaviv in the context of Broad’s article is an instance of false balance of the worst sort. The possibility that the GCR theory may play some role in deep-time Phanerozoic climate is eminently worthy of further consideration, but the way its major proponents have used the theory in attempts to undermine forecasts of near-term warming is unjustified.

Besides the broad-brush errors discussed above, Mr. Broad commits a number of lesser climatological faux pas, in areas where he really ought to know better. He refers to CO2 as "blocking sunlight" (whereas it’s actually thermal infrared which CO2 affects). He says that CO2 traps heat "in theory." This is a lot like saying that a bowling ball dropped from an airplane will fall to the ground "in theory." There is indeed a theory involved in both cases, but the use of the phrase gives a completely wrong picture of the certainty of the phenomenon. There is no more doubt about the heat-trapping effect of CO2 than there is about the physics that causes a bowling ball to fall. Broad also says that the greenhouse effect of CO2 "plateaus" at high levels. This is a botched attempt to describe the well-known logarithmic radiative forcing of CO2, incorporated in every climate model since the time of Arrhenius. There is no "plateau" where CO2 stops being important. Every time you double CO2, you get another 4 Watts per square meter of radiative forcing, so that the anticipated climate change between present CO2 and doubled CO2 is comparable to that between doubled CO2 and quadrupled CO2. In fact, as one goes to very high CO2 levels (comparable to the Early Earth), the radiative forcing starts to become more, rather than less, sensitive to each further doubling (something that can be inferred from the radiative forcing fits in Caldeira and Kasting’s 1992 paper in Nature).

Let’s not lose sight, however, of the essential conundrum posed by Phanerozoic climate, particularly by the warm climates of the Cretaceous and Eocene. Current climate models do not reproduce the weak pole to equator gradients believed to characterize these climates, and have trouble warming up the polar climates enough to melt ice and eliminate continental winter without frying the tropics more than data seems to permit. Maybe there’s something wrong with the data, or maybe there are currently unknown amplification mechanisms that make the switch from a moderate Holocene type climate to a hothouse more catastrophically sensitive to CO2. This truly must give us pause as we contemplate the experiment of doubling CO2 in the next century. It’s certainly an experiment that would help to resolve some of the mysteries of Phanerozoic climate, but we’d on the whole prefer to see the mysteries resolved by improved studies of past climate instead.

Update: See Tom Yulsman’s commentary on this post and the broader issues.