Readers might remember a minor kerfuffle in EOS (the AGU house journal) in February this year in which Gerald Stanhill claimed to find a paradox in the contemporaneous effects of global warming and global dimming (a long term reduction of surface solar radiation, mainly due to aerosols and clouds). The article attracted attention mainly because the paradox was claimed to “pose [a challenge] to the consensus explanation of climate change”.

Rather than point out the subtle confusions (between surface and tropospheric forcing, and local and global signals) here, I and two co-authors wrote a comment to the journal. After a number of avoidable and unavoidable delays, this comment (along with another one and a reply) have all now appeared in EOS (Nov 6 edition). By now of course, the original piece has been long forgotten and so the point in having the correspondence printed is unclear, but still…

For those that care, I’ll link our comment once it’s been posted on the GISS website (now available here), but the bottom line is clearly seen in the following figure: 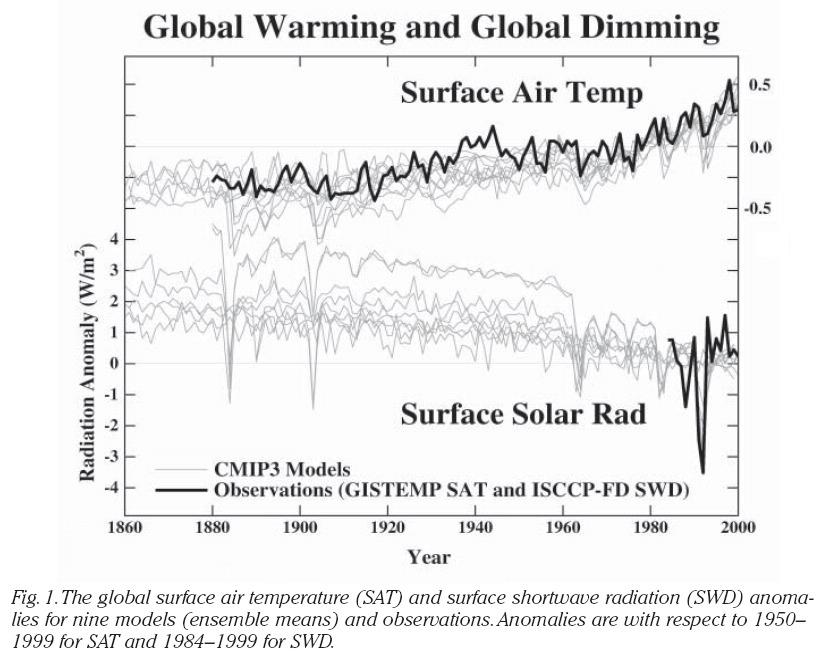 That is, if you take all of the IPCC AR4 models (now called the CMIP3 ensemble), then over the twentieth century all of them show varying degrees of global warming, while at the same time they show significant global dimming. An earlier paper of ours had pointed to the aerosols (unsurprisingly) being the dominant cause for long term changes in dimming, but that changes in clouds on a decadal basis were responsible for much of the shorter term variability. Thus there doesn’t appear to be much ‘paradox’ left to worry about – both dimming and warming are seen in models and in observations.

Apologies for appearing to push my own papers here (not something we like to do particularly), but the published comment would have been better done as a blog post in February. There may be a lesson there….