You are here: Home / Climate Science / Of buckets and blogs

The best commentary came from John Nielsen-Gammon’s new blog where he described very clearly how the uncertainties in data – both the known unknowns and unknown unknowns – get handled in practice (read that and then come back). Stoat, quite sensibly, suggested that it’s a bit early to be expressing an opinion on what it all means. But patience is not one of the blogosphere’s virtues and so there was no shortage of people extrapolating wildly to support their pet hobbyhorses. This in itself is not so unusual; despite much advice to the contrary, people (the media and bloggers) tend to weight new individual papers that make the news far more highly than the balance of evidence that really underlies assessments like the IPCC. But in this case, the addition of a little knowledge made the usual extravagances a little more scientific-looking and has given it some extra steam.

Like almost all historical climate data, ship-board sea surface temperatures (SST) were not collected with long term climate trends in mind. Thus practices varied enormously among ships and fleets and over time. In the 19th Century, simple wooden buckets would be thrown over the side to collect the water (a non-trivial exercise when a ship is moving, as many novice ocean-going researchers will painfully recall). Later on, special canvas buckets were used, and after WWII, insulated ‘buckets’ became more standard – though these aren’t really buckets in the colloquial sense of the word as the photo shows (pay attention to this because it comes up later). 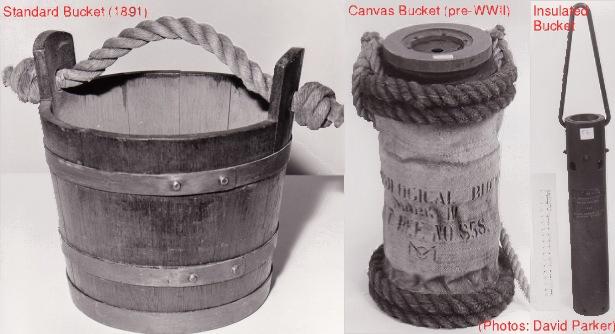 The thermodynamic properties of each of these buckets are different and so when blending data sources together to get an estimate of the true anomaly, corrections for these biases are needed. For instance, the canvas buckets give a temperature up to 1ºC cooler in some circumstances (that depend on season and location – the biggest differences come over warm water in winter, global average is about 0.4ºC cooler) than the modern insulated buckets. Insulated buckets have a slight cool bias compared to temperature measurements that are taken at the inlet for water in the engine room which is the most used method at present. Automated buoys and drifters, which became more common in recent decades, tend to be cooler than the engine intake measures as well. The recent IPCC report had a thorough description of these issues (section 3.B.3) fully acknowledging that these corrections are a work in progress.

And that is indeed the case. The collection and digitisation of the ship logbooks is a huge undertaking and continues to add significant amounts of 20th Century and earlier data to the records. This dataset (ICOADS) is continually growing, and the impacts of the bias adjustments are continually being assessed. The biggest transitions in measurements occurred at the beginning of WWII between 1939 and 1941 when the sources of data switched from European fleets to almost exclusively US fleets (and who tended to use engine inlet temperatures rather than canvas buckets). This offset was large and dramatic and was identified more than ten years ago from comparisons of simultaneous measurements of night-time marine air temperatures (NMAT) which did not show such a shift. The experimentally-based adjustment to account for the canvas bucket cooling brought the sea surface temperatures much more into line with the NMAT series (Folland and Parker, 1995). (Note that this reduced the 20th Century trends in SST). 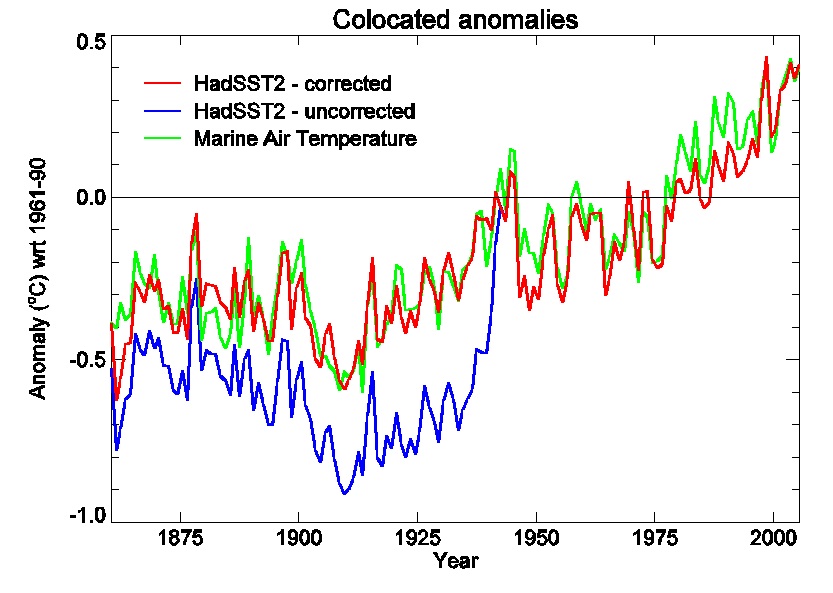 More recent work (for instance, at this workshop in 2005), has focussed on refining the estimates and incorporating new sources of data. For instance, the 1941 shift in the original corrections, was reduced and pushed back to 1939 with the addition of substantial and dominant amounts of US Merchant Marine data (which mostly used engine inlets temperatures).

The version of the data that is currently used in most temperature reconstructions is based on the work of Rayner and colleagues (reported in 2006). In their discussion of remaining issues they state: 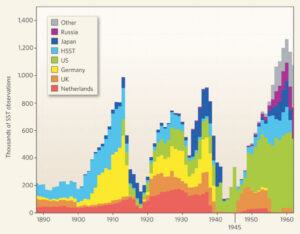 Using metadata in the ICOADS it is possible to compare the contributions made by different countries to the marine component of the global temperature curve. Different countries give different advice to their observing fleets concerning how best to measure SST. Breaking the data up into separate countries’ contributions shows that the assumption made in deriving the original bucket corrections—that is, that the use of uninsulated buckets ended in January 1942—is incorrect. In particular, data gathered by ships recruited by Japan and the Netherlands (not shown) are biased in a way that suggests that these nations were still using uninsulated buckets to obtain SST measurements as late as the 1960s. By contrast, it appears that the United States started the switch to using engine room intake measurements as early as 1920.

They go on to mention the modern buoy problems and the continued need to work out bias corrections for changing engine inlet data as well as minor issues related to the modern insulated buckets. For example, the differences in co-located modern bucket and inlet temperatures are around 0.1 deg C: 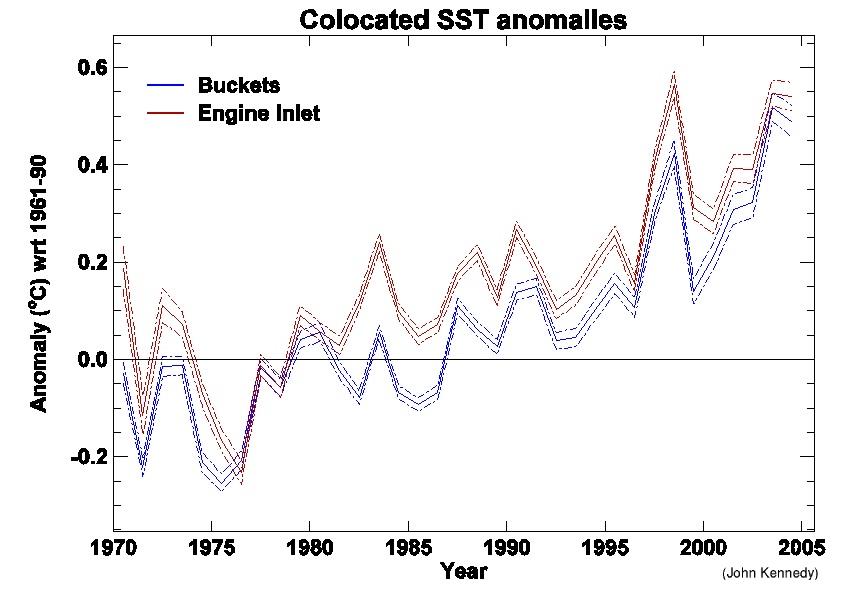 However it is one thing to suspect that biases might remain in a dataset (a sentiment shared by everyone), it is quite another to show that they are really have an impact. The Thompson et al paper does the latter quite effectively by removing variability associated with some known climate modes (including ENSO) and seeing the 1945 anomaly pop out clearly. In doing this in fact, they show that the previous adjustments in the pre-war period were probably ok (though there is substantial additional evidence of that in any case – see the references in Rayner et al, 2006). The Thompson anomaly seems to coincide strongly with the post-war shift back to a mix of US and UK ships, implying that post-war bias corrections are indeed required and significant. This conclusion is not much of a surprise to any of the people working on this since they have been saying it in publications and meetings for years. The issue is of course quantifying and validating the corrections, for which the Thompson analysis might prove useful. The use of canvas buckets by the Dutch, Japanese and some UK ships is most likely to blame, and given the mix of national fleets shown above, this will make a noticeable difference in 1945 up to the early 1960s maybe – the details will depend on the seasonal and areal coverage of those sources compared to the dominant US information. The schematic in the Independent is probably a good first guess at what the change will look like (remember that the ocean changes are constrained by the NMAT record shown above):

Note that there was a big El Niño event in 1941 (independently documented in coral and other records).

So far, so good. The fun for the blog-watchers is what happened next. What could one do to get the story all wrong? First, you could incorrectly assume that scientists working on this must somehow be unaware of the problems (that is belied by the frequent mention of post WWII issues in workshops and papers since at least 2005, but never mind). Next, you could conflate the ‘buckets’ used in recent decades (as seen in the graphs in Kent et al 2007‘s discussion of the ICOADS meta-data) with the buckets in the pre-war period (see photo above) and exaggerate how prevalent they were. If you do make those mistakes however, you can extrapolate to get some rather dramatic (and erroneous) conclusions. For instance, that the effect of the ‘corrections’ would be to halve the SST trend from the 1970s. Gosh! (You should be careful not to mention the mismatch this would create with the independent NMAT data series). But there is more! You could take the (incorrect) prescription based on the bucket confusion, apply it to the full global temperatures (land included, hmm…) and think that this merits a discussion on whether the whole IPCC edifice had been completely undermined (Answer: no). And it goes on – once the bucket confusion was pointed out, the complaint switched to the scandal that it wasn’t properly explained and well, there must be something else…

All this shows wishful thinking overcoming logic. Every time there is a similar rush to judgment that is subsequently shown to be based on nothing, it still adds to the vast array of similar ‘evidence’ that keeps getting trotted out by the ill-informed. The excuse that these are just exploratory exercises in what-if thinking wears a little thin when the ‘what if’ always leads to the same (desired) conclusion. This week’s play-by-play was quite revealing on that score.

[Belated update: Interested in knowing how this worked out? Read this.]

267 Responses to "Of buckets and blogs"