You are here: Home / Climate Science / Adapting in Amsterdam 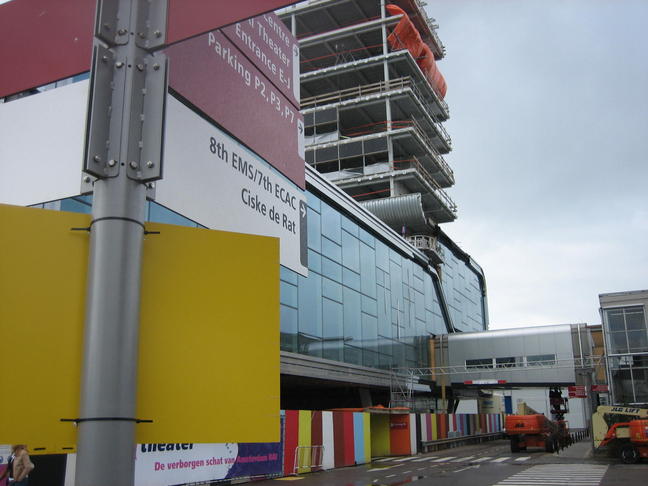 The theme of this year’s annual meeting of the European Meteorological Society (EMS) [European Congress on Applied Climatology (ECAC)] was adaptation to climate change. So what’s more appropriate then, than hosting the meeting in Amsterdam – on a building site?

Adaption may involve changes in both building practices and in being able to forecast adverse conditions. Thus under a global warming, there is a greater need for improved seasonal forecasts to be prepared for changes in seasonal variability, a likely consequence of a global warming.

One of the more interesting talks was delivered by Tim Palmer (from the ECMWF) on ‘seamless prediction’. This is one of the recent buzz words in the community. It refers to the idea of using one system to predict atmospheric conditions on time scales varying from hours to decades.

Due to historical and practical reasons, day-to-day weather forecasts tend to be performed on different systems than seasonal forecasts and climate change scenarios. Whereas the former can take the oceanic state to be approximately constant for the next few days, slow changes may have a greater impact for the latter two.

Numerical weather prediction (NWP – i.e. the daily operational weather forecast) and climatology communities have drifted apart for a while, but Palmer argued that there is a need to a convergence of the communities. He also proposed using global climate models (GCMs) the way NWP models are used for weather forecasting to test their quality. By looking at the initial part of their evolution, he reckoned it may be possible to get some idea of how good they are. Thus, he proposed a way to weigh the different GCMs up against each other. Time will show if this strategy will work.

As an illustration of how such a test may reveal the quality of the GCMs, Palmer used the model runs in the climateprediction.net project that were responsible for the very high climate sensitivities (see previous post here). These high numbers had been identified with GCMs with low convective entrainment – meaning that they mixed in less of the ambient air from the side during convection than ‘normal’ models. The degree of mixing is described statistically and is set by parameterizations. A comparison of NWP models using low convective entrainment with ‘normal’ models revealed greater imbalances in the former (one caveat was that a different model was used in this case). Thus, low values for the convective entrainment parameterization are less realistic, and hence the high climate sensitivities derived in the climateprediction.net project are therefore questionable.

One concern regarding the use of GCMs as NWP models is that the latter involve an initialization problem (predictability of the first kind) while climate modeling represent a boundary value problem (predictability of the second type; see more on this here and here). Furthermore, evaluation of the skill of weather and seasonal forecasts tend to imply regional or local scales, whereas climate modeling has focused more on the large-scale features (‘finger printing’, however, does take regional features into account). Seasonal forecasting may involve bias corrections referred to as ‘calibration’ – fixing the statistical distribution of the prognostic variables so that they are comparable with the observations – and they still struggle for places like northern Europe.

Despite the fact that the theme of the conference was on adaptation, there were also discussions about mitigation – which was seen as part of any real solution to the climate change problem. Woerkom talked about climate change communication and argued that people don’t act on their beliefs. Energy consumption associated with life styles is difficult to change, and social pressures and expectations are some of the obstacles. He suggested that people have to be supported in the implementation.

38 Responses to "Adapting in Amsterdam"