You are here: Home / Climate Science / Arctic and Antarctic / Cold winter in a world of warming? 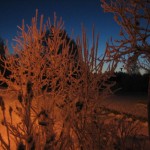 Last June, during the International Polar Year conference, James Overland suggested that there are more cold and snowy winters to come. He argued that the exceptionally cold snowy 2009-2010 winter in Europe had a connection with the loss of sea-ice in the Arctic. The cold winters were associated with a persistent ‘blocking event’, bringing in cold air over Europe from the north and the east.

Last year’s cold winter over northern Europe was also associated with an extreme situation associated with the North Atlantic Oscillation (NAO), with the second lowest value for the NAO-index on record (see figure below).

I admit, last winter felt quite cold, but still it wasn’t so cold when put into longer historical perspective. This is because I remember the most recent winters more vividly than those of my childhood – which would be considered to be really frosty by today’s standards. But such recollections can be very subjective, and more objective measurements show that the winters in Europe have in general become warmer in the long run, as explained in the German blog called ‘Wissenlogs’. If there were no trend, then such a low NAO-index as last year’s would normally be associated with even colder conditions over Europe than those observed during the previous winter.

In a more recent press-release, Vladimir Petoukhov and Vladimir Semenov, argue that Global Warming could cool down winter temperatures over Europe, and a reduced sea-ice extent could increase the chance of getting cold winters. Also they propose that cold winters are associated with the atmospheric circulation (see schematic below), and their press-release was based on a paper in Journal of Geophysical Research (JGR), which may seem to have a serendipitous timing with the cold spell over Europe during the last weeks. However, the original manuscript was submitted in november 2009 (before the statement made by James Overland) and accepted in May 2010. One could regard the paper more as a ‘prediction’ rather than an ‘explanation’.

Although Petoukhov and Semenov’s findings sound plausible, I don’t think they are as straight-forward as they initially seem in terms of their implications for this winter either. For one thing, it is impossible to prove that one single event is due to a change in the long-term, as we pointed out for the case of hurricanes (The 2010 hurricane season this year, by the way, was quite active).

I think it is important to keep in mind that the Petoukhov and Semenov study is based on a global atmosphere model that simulated a non-linear response to the loss of sea-ice in the Barents-Kara seas: initially warm winters, followed by cold, and then warm winters, as the sea-ice extent is gradually reduced.

One interesting question is how the Barents-Kara sea-ice affects the winter temperatures over the northern continents. By removing the sea-ice, the atmosphere above feels a stronger heating from the ocean, resulting in anomalous warm conditions over the Barent-Kara seas. The local warming gives rise to altered temperature profiles (temperature gradients) along the vertical and horizontal dimensions.

Changes in the temperature profiles, in turn, affect the circulation, triggering a development of a local blocking structure when the sea-ice extent is reduced from 80% to 40%. But Petoukhov and Semenov also found that it brings a different response when the sea-ice is reduced from 100% to 80% or from 40% to1%, and hence a non-linear response. The most intriguing side to this study was the changing character of the atmospheric response to the sea-ice reduction: from a local cyclonic to anti-cyclonic, and back to cyclonic pattern again. These cyclonic and anti-cyclonic patterns bear some resemblance to the positive and negative NAO phases.

They also show a different response in surface air temperature (SAT) during December, January, and February. From their Figure 2, it is not immediately obvious from that figure that a sea-ice reduction leads to lower SAT during January. This is, however, very much in line with similar analysis that I have carried out with colleagues and struggled to find a consistent response (albeit we looked at the summer season).

But Petoukhov and Semenov provide theoretical support for their observations, and argue that the non-linear response can be explained in terms of ‘convectional-frictional’ and ‘baro-clinic-frictional’ mechanisms. The former includes warming over the areas where sea-ice disappear, and changes in the vertical temperature gradients, stability, and hence friction, while the latter involves a change in the surface friction force associated with temperature changes over distances.

I think that the scientific community will need some time to confirm this link, and there are some
important caveats: For one thing, the spatial model resolution (the size between the boxes in the grid mesh, through which the models represent the world) has an influence on their ability to represent blocking frequency. Hazeleger et al. Has observed that “… different horizontal resolutions … confirm the resolution-dependence found in NWP [Numerical Weather Prediction]”. The atmospheric model used by Petoukhov and Semenov has a fairly coarse spatial resolution (2.8 degrees x2.8 degrees), and it is legitimate to question whether it can reproduce the
frequencies of blocking events realistically, and whether that has a bearing for the conclusions.

But also the fact that the sea-surface temperatures (SSTs) were fixed in these experiments may affect the conclusions. Balmaseda et al. found that the atmospheric response to changes in sea-ice conditions may depend on the background SSTs, at least for the summer months. They also compared results from a coupled ocean-atmosphere model with the results from an atmosphere model for which the SSTs were given. Their unexpected finding was that the atmospheric response in these two cases were very different.

In fact, global atmospheric and climate models are better at describing the large picture than more regional and local characteristics. There is a limit to what they are able to describe in terms of local regional details, and it it reasonable to ask whether the response to changes in regional sea-ice cover is beyond the limitation of the global model. If different models give different answers, then it is likely that the response is not robust.

Another interesting question is whether the sea-ice the is whole story. Not long ago, there were some suggestions of a link between low solar activity and cold winters (this correlation, however, is so weak that you would never notice without statistical analysis. Also see comment here). Do these factors affect the circulation patterns over the North Atlantic? The sunspots tend to vary on a time scale of 10-12 years, but the NAO-index suggests that few of the extreme low values were repeated over two subsequent years. In other words, the NAO doesn’t show the same persistence as the sunspots. It will be interesting to see if this winter will break with previous patterns – if it does, that could be interpreted as a support of Petoukhov and Semenov hypothesis.

It is nevertheless no contradiction between a global warming and cold winters in regions like Europe. Rather, recent analysis suggest that the global mean temperature is marching towards higher values (see figure below), and Petoukhov and Semenov argue that the cold winter should be an expected consequence of a global warming.

618 Responses to "Cold winter in a world of warming?"