You are here: Home / Climate Science / Climate impacts / The dog is the weather

Update January 27: There is also another recent dog-based animations from Victoria (southeast Australia) explaining some of the key drivers of our climate and how some are changing.

A TV series that ran on Norwegian TV (NRK) last year included a simple and fun cartoon that demonstrates some important concepts relative to weather and climate: 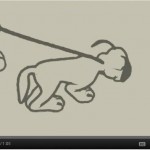 In the animation, the man’s path can be considered as analogous to a directional climatic change, while the path traced by his dog’s whimsical movements represent weather fluctuations, as constrained by the man’s path, the leash, and the dog’s moment-by-moment decisions of what seems important to investigate in his small world. What might the leash length represent? The man’s momentary pause? The dog’s exact route relative to concepts of random variation? The messages in this animation are similar to the recent results of Grant Foster and Stefan Rahmstorf in ERL (see post here).

We’d also like to praise the TV-series ‘Siffer‘, hosted by an enthusiastic statistician explaining how most things in our world relate to mathematics. The series covers a range of subjects, for instance gambling theory, the Tragedy of the Commons, anecdotes about mathematical riddles, medical statistics, and construction design; it even answers why champagne from a large bottle tastes better than that from a smaller one. There is also an episode devoted to weather forecasting and climate.

Success in understanding our universe often depends on how the ‘story’ about it is told, and a big part of that often involves how mental images are presented. Mathematics and statistics can describe nature in great detail and “elegance”, but they are often difficult and inaccessible to the average person. Conversely, the man-and-dog animation is intuitive and easy to comprehend. Similarly, Hans Rosling’s Fun with Stats provides some very nice demonstrations of how to convey meaning via the creative display of numbers.

68 Responses to "The dog is the weather"