You are here: Home / Climate Science / Tree Rings and Climate: Some Recent Developments

It’s been a tough few months for tree-rings, perhaps unfairly. Back in April, we commented on a study [that one of us (Mike) was involved in] that focused on the possibility that there is a threshold on the cooling recorded by tree-ring composites that could limit their ability to capture the short-term cooling signal associated with larger volcanic eruptions. Mostly lost in the discussion, however, was the fact–emphasized in the paper—that the trees appeared to be doing a remarkably good job in capturing the long-term temperature signal—the aspect of greatest relevance in discussions of climate change.

This week there have been two additional studies published raising questions about the interpretation of tree-ring based climate reconstructions.

The first of these by Steinman et al (Mike is again a co-author) appeared in PNAS, and compared evidence of winter precipitation changes in the Pacific Northwest over the past 1500 years using a physical model-based analysis of lake sediment oxygen isotope data to statistical reconstructions of drought based on tree ring data. Steinman et al note that the tree-ring and lake estimates track each other well on multidecadal timescales, but show some divergence in their lower frequency (i.e. centennial and longer timescale) trends. They conclude that this divergence may simply reflect the differing and, in fact, complementary seasonal information reflected by the two proxy records, noting in the abstract:

differences in seasonal sensitivity between the two proxies allow a more complete understanding of the climate system and likely explain disparities in inferred climate trends over centennial timescales.

The authors amplified this point in their press release (emphasis added):

Tree ring and oxygen isotope data from the U.S. Pacific Northwest do not provide the same information on past precipitation, but rather than causing a problem, the differing results are a good thing, according to a team of geologists.

Nonetheless, some of the coverage (e.g. “Scientists see ancient climate patterns in lake-bottom ‘muck” by Lauren Morello, E&E/Climatewire, July 3, 2012) emphasized conflict between scientists over the discrepancies, rather than the more positive message about making use of complementary strengths of diverse sources of information about past climate change. In other words the ‘signal’ (moving forward with the science) became buried in the ‘noise’ (scientists on record arguing with each other).

The principle that different types of proxy data are complementary in the information they provide is in fact the motivation for the development of “multiple proxy” (multiproxy) reconstructions of climate (see e.g. this commentary by Mike from a decade ago). A new paper today is worth discussing for just this reason.

Jan Esper and colleagues have an article in Nature Climate Change that introduces a new reconstruction (N-Scan) of high-latitude (Fennoscandian) summer temperature changes over the past two millennia based on Maximum Latewood Density (‘MXD’). The most exciting–and in our view important–development is that they seem to have greatly ameliorated the “divergence problem” that has plagued some surface temperature reconstructions based on these types of data; given that the revised MXD data appear to be able to track the most recent warming provides increased confidence in the estimates they provide of past temperature changes.

Another interesting finding is that N-Scan exhibits a substantially larger pre-industrial (pre 1900) millennial cooling trend (around -0.31C/1000yr) than a tree ring width (TRW) based summer temperature reconstruction from the same trees. The authors interpret this finding as indicating that TRW reconstructions may be unable to recover millennial-timescale temperature trends owing to non-biological impacts on growth and limitations of detrending procedures used to separate climatic and non-climatic growth components. This seems a plausible conclusion, arrived at through a thoughtful and elegant case study. Yet the article extrapolates quite a bit, in terms of its conclusions regarding proxy-based temperature reconstructions more generally. The authors make much of the importance of long-term radiative forcing due to the changes in the earth’s orbit for millennial timescale temperature trends. They argue that TRW data which fail to record this forced long-term cooling might therefore underestimate variability on millennial timescales more generally, and potentially underestimate the warmth of past warm periods (e.g. medieval and Roman periods).

Orbital forcing is indeed substantial on the millennial timescale for high-latitudes during the summer season, and the theoretically expected cooling trend is seen in proxy reconstructions of Arctic summer temperature trends (Kaufman et al, 2009). But insolation forcing is near zero at tropical latitudes, and long-term cooling trends are not seen in non-tree ring, tropical terrestrial proxy records such as the Lake Tanganyika (tropical East Africa) record (Tierney et al, 2010) (see below).

Long-term orbital forcing over the past 1-2 millennia is also minimal for annual, global or hemispheric insolation changes, and other natural forcings such as volcanic and solar radiative forcing have been shown to be adequate in explaining past long-term pre-industrial temperature trends in this case (e.g. Hegerl et al, 2007). Esper et al’s speculation that the potential bias they identify with high-latitude, summer-temperature TRW tree-ring data carry over to a bias in hemispheric temperature reconstructions based on multiple types of proxy records spanning tropics and extratropics, ocean and land, and which reflect a range of seasons, not just summer (e.g. Hegerl et al, 2006; Mann et al, 1999;2008) is therefore a stretch.

Indeed, there are a number of lines of evidence that contradict that more speculative claim. For example, if one eliminates tree-ring data entirely from the Mann et al (2008) “EIV” temperature reconstruction (see below; blue curve corresponds to the case where all tree-ring data have been withheld from the multiproxy network), one finds not only that the resulting reconstruction is broadly similar to that obtained with tree-ring data, but in fact the pre-industrial long-term cooling trend in hemispheric mean temperature is actually lessened when the tree-ring data are eliminated—precisely the opposite of what is predicted by the Esper et al hypothesis. 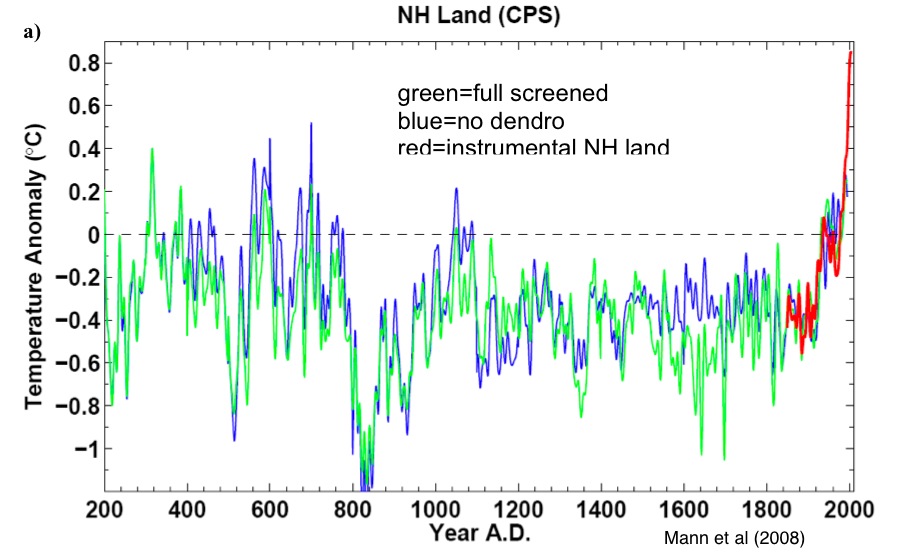 The wider hypothesis doesn’t get much support from looking at the pre-industrial millennial-scale temperature trends in published proxy reconstructions of Northern Hemisphere mean temperature, all of which indicate cooling of varying magnitudes. Ordered from smallest to largest cooling trend, we have:

This can be loosely compared to the -0.31 ºC/1000yr estimate derived for N-Scan and trends of -0.10 and -0.19 ºC/1000yr at that latitude in summer seen in two model estimates discussed – though note that the model simulations will have smaller trends for the whole hemisphere and for the annual mean.

There are a few rather interesting observations here. One is that the Moberg et al (2006) reconstruction, which–unlike all of the other reconstructions listed above–uses no tree-ring proxy data at all to estimate centennial and longer-timescale temperature variations, shows the smallest cooling trend of all. That is in contrast to Esper et al’s hypothesis that including tree-ring data leads to reduced long-term cooling trends. Another interesting observation is that trends calculated from Ljungqvist (2010), Mann et al (1999), and Mann et al (2008) are quite similar to the theoretical cooling trends cited by Esper et al (based on forced multi-millenial GCM experiments; in fact the Mann et al 2008 trend is substantially greater than the model estimates). So there is no support, at least with these reconstructions, for any systematic underestimate of forced millennial temperature changes, if the climate models–and forcings used to drive them—are indeed correct.

Finally, as these latter reconstructions target full hemispheric mean temperature, including tropics & extratropics, and annual mean conditions, the impact of orbital forcing is expected to be far smaller than for high-latitude summer reconstructions, such as this new N-Scan reconstruction. So the fact that a larger millennial cooling trend is seen in this latter case is hardly surprising.

In any case, the Esper et al paper represents a valuable contribution, suggesting important steps forward in the science of dendroclimatology. The paper provides a promising approach to at least reducing the vexing “divergence problem”, and it suggests prospects for tree-ring reconstructions of extratropical summer temperature with substantially greater fidelity at millennial timescales.

Only by understanding the relative strengths, weaknesses, and limitations of various sources of proxy evidence can we continue to refine proxy estimates of past climate change, something that is of interest not just to the paleoclimate community, but to the broader climate research community which relies, in part, on paleodata as a benchmark for testing and evaluating our mechanistic understanding of the climate system.

Ljungqvist, F. C., A new reconstruction of temperature variability in the extra-tropical Northern Hemisphere during the last two millennia. Geogr. Ann., 92A, 339-351 (2010).

79 Responses to "Tree Rings and Climate: Some Recent Developments"