I was reading a sign high on the wall behind the bar:

I was trying to count how many lies could be found in those nine words, and had reached four, with promise of more …”

Google News occasionally throws up some obscure postings that I would never otherwise come across. A recent example was a letter to an editor of a Scottish newspaper (not my usual reading material) declaring that “Climate change is not man-made”. The letter itself is uninteresting – a basic confusion between weather and climate seguing into a NIMBY-ish rant about windmills. Ho hum.

However, in one of the comments from a “Dr John Cameron, St Andrews” (posted 9/Oct/2012), there was this unrelated pseudo-factoid:

As regards the catastrophic sea level rise in the Pacific, it became obvious some 20 years ago that results from island tide gauges did not support computer predictions. Scientists from Flinders University in Adelaide set up new, modern, tide-gauges in 12 Pacific islands to test whether there was in fact any evidence of sinking. Recently the whole project was abandoned as there had been no sign whatsoever of a change in sea level at any of the 12 islands for the past 16 years.

Now this is specific enough to probably actually refer to something real, but doesn’t pass the sniff test for something that might actually be true. Scientists don’t set up monitoring stations only to get the answer they want and then stop monitoring if it doesn’t happen. This only happens in the fevered imaginations of conspiracy theorists. So I was intrigued enough to investigate what this actually referred to…

The easiest way to look for this is to search for the exact string – specifically the second sentence. Google comes up with 1000 or so very close antecedents – particularly with the “new, modern, tide-gauges in 12 Pacific islands” section. The links are to comment threads on partisan websites, the standard climate ‘skeptic’ blogs, and even a mention on SkepticalScience. The comments stretch back around 5 years. Some of the examples give an actual source for the remarks (unlike Dr. Cameron’s version) – one Dr. Vincent Gray – a well known pseudo-skeptic. Some even cite the newspaper article they appeared in – a error-ridden puff piece by Lawrence Solomon at the Canadian Financial Post. Curiously, that online version of the article doesn’t have a publishing date – though secondary sources suggest it was published on Oct 26th 2007. The lack of a date means that people quoting it often claim that this is a ‘recent’ claim.

Going back a little further, Gray made similar claims in a July 2007 article:

A claim that Pacific Islands were sinking led to an investigation by Flinders University, Adelaide, which replaced all the tide gauges in 12 Pacific islands to attempt to find out whether it was true. The attempt has now been abandoned as a failure, as none of the 12 islands showed any significant change since 1991. The team tried to save face by claiming that all showed an upwards “trend” because the 1998 hurricane caused a temporary depression in the ocean. Since 1998 all have remained flat, and the main island of contention, Tuvalu, actually rose last year.

This is referenced to an actual report from the Australian Bureau of Meteorology about the “South Pacific Sea Level and Climate Monitoring Project” (SPSLCMP), dated November 2006. Now we are getting somewhere!

There are some obvious signs of confusion in the Gray/Cameron statements. Firstly, the Australian National Tidal Facility (which installed and monitored the tide gauges starting in 1991) used to be managed by Flinders University in Adelaide – but the facility was transferred to the National Tidal Centre run by the Bureau of Meteorology … in 2003!

Second, the SPSLCMP has been rolled out in stages starting in 1991: the third stage terminating in Dec 2005 – and they are now in stage IV. This might be the source of Gray’s claim that the project had been abandoned, though even the report he cited clearly states that the phase IV was started in January 2006 and was slated to continue at least another 5 years (at that time). The ‘last 16 years’ is a clue that the Cameron statement was obviously written in 2007 not 2012.

Finally, annual reports from SPSLCMP are available through to June 2011 – indicating a project that is very much ongoing and one that was not ‘abandoned’ before 2007.

So none of the statements that Gray (and Cameron) made about the project itself were true (either in 2007 or in 2012). But what about the sea level trends?

This is even odder. The report Gray cites states clearly that relative sea level trends (1992/3/4 to 2006) at all stations were positive (2.7 to 8.1 mm/year for the 11 of the 12 stations with long enough records). The 12th station at FSM was only installed in 2001 and the trends were very noisy (though positive). The Jun 2006 SPSLCMP report goes further and applies corrections for platform movement and the inverted barometer effect, concluding that trends ranged from 1.7 to 7 mm/year at the 11 longer stations. Note that these trends may include a component of subsidence/uplift of the islands themselves and so are the numbers most relevant for local planning (not eustatic sea level change). But so much for not finding a trend! 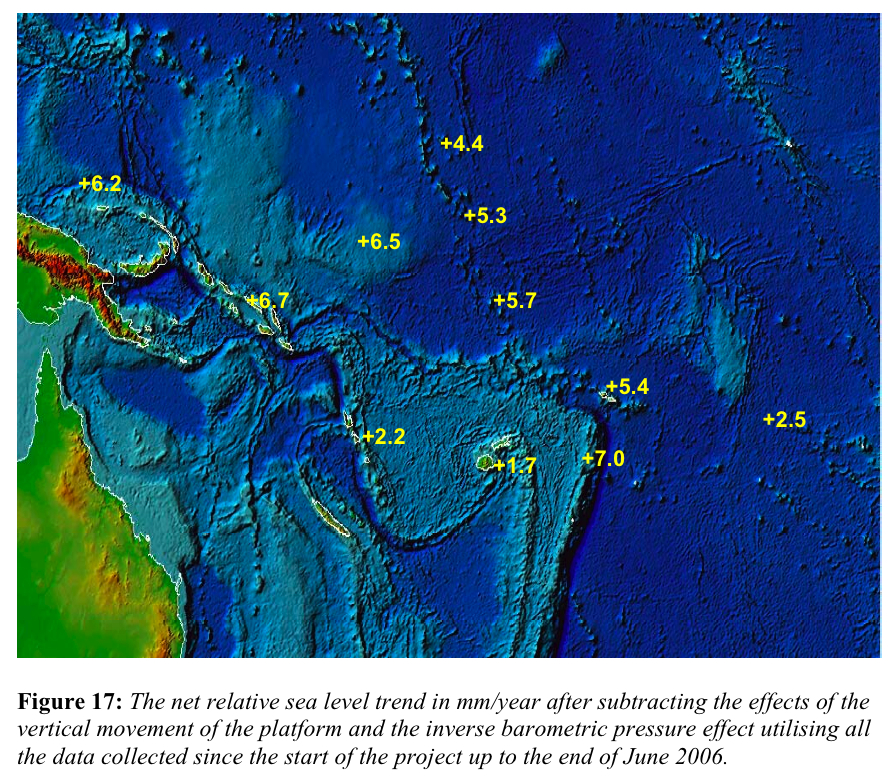 As one would expect, monitoring has continued since 2007, and in the latest report (June 2011), the 11-station trends range from 2.8 to 7.7 mm/year (and +17.0 mm/year at the FSM station). The monthly data series are available here for people to check for themselves. Comparisons with the satellite altimeter records show a reasonable coherence since the West Pacific sea level has risen faster than the global mean (at least partially related to the number of recent La Niña events). 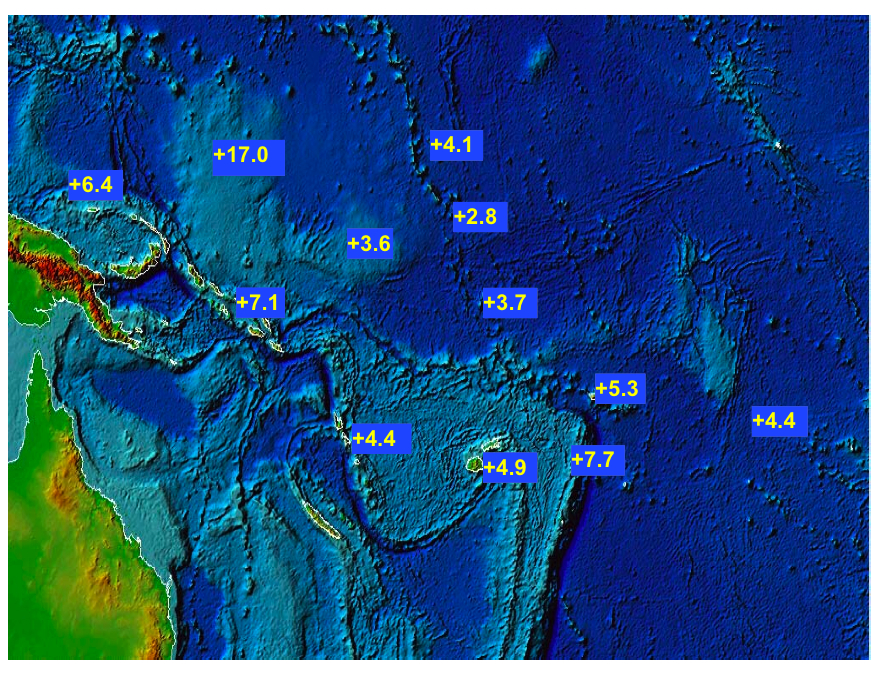 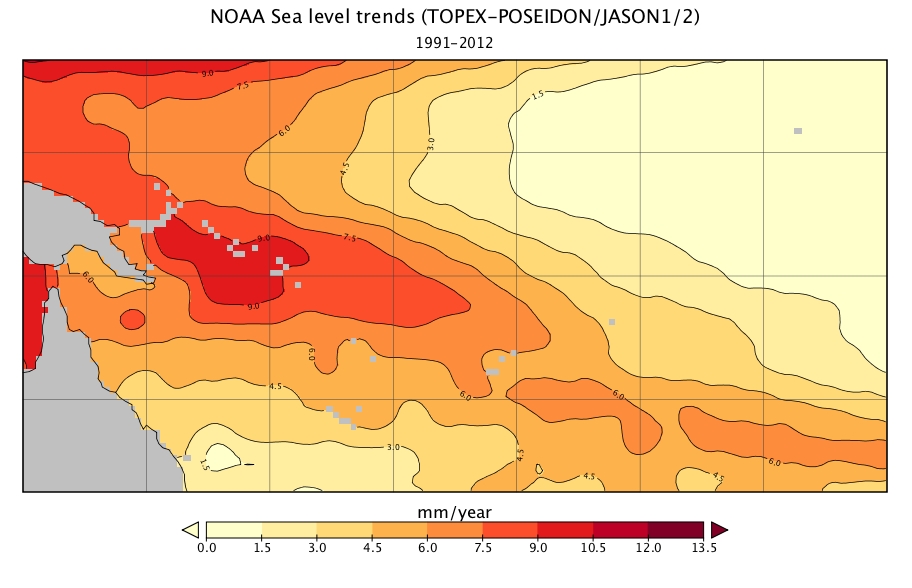 In summary, every piece of concrete information in the Gray/Cameron statement is wrong. They were wrong even in 2007 when the statement was written and even wronger when it was cut-and-pasted without sources in 2012. Yet demonstrating this took a a few hours of googling, a little familiarity with the issues and people, and obviously is not going to be done by every reader. Thus a statement which clearly make no sense goes unchallenged for years and keeps getting regurgitated. Sure, no single statement like this is likely going to change anyone’s mind about anything, but this one and others like it form part of a drumbeat of disinformation, which by repetition, becomes embedded and hard to shift.

A good question would be why I bothered to research a claim in an obscure comment, on an obscure letter to the editor in a regional newspaper I have never read, and I don’t really have a good answer. Clearly, looking for substantive points in newspaper comment threads is a bit of a fool’s errand, but I was still surprised at how completely wrong every single aspect of the comment was. Given that I did look into it, it is worth sharing here – just on the off chance it will save someone else the bother.

* The Golden Horseshoe award, whose name derives from the Hammett quote above, is for spectacular wrongness in the climate discussion, first initiated by SomeAreBoojums, and occasionally revived by the Wabett.