One might assume that people would be happy that the latest version of the Hadley Centre and CRU combined temperature index is now being updated on a monthly basis. The improvements over the previous version in terms of coverage and error estimates is substantial. One might think that these advances – albeit incremental – would at least get mentioned in a story that used the new data set. Of course, one would not be taking into account the monumental capacity for some journalists and the outlets they work for to make up stories whenever it suits them. But all of the kerfuffle over the Mail story and the endless discussions over short and long term temperature trends hides what people are actually arguing about – what is likely to happen in the future, rather than what has happened in the past.

The fundamental point I will try and make here is that, given a noisy temperature record, many different statements can be true at the same time, but very few of them are informative about future trends. Thus vehemence of arguments about the past trends is in large part an unacknowledged proxy argument about the future.

So here are a few things that are all equally true, conveniently plotted for your amusement: 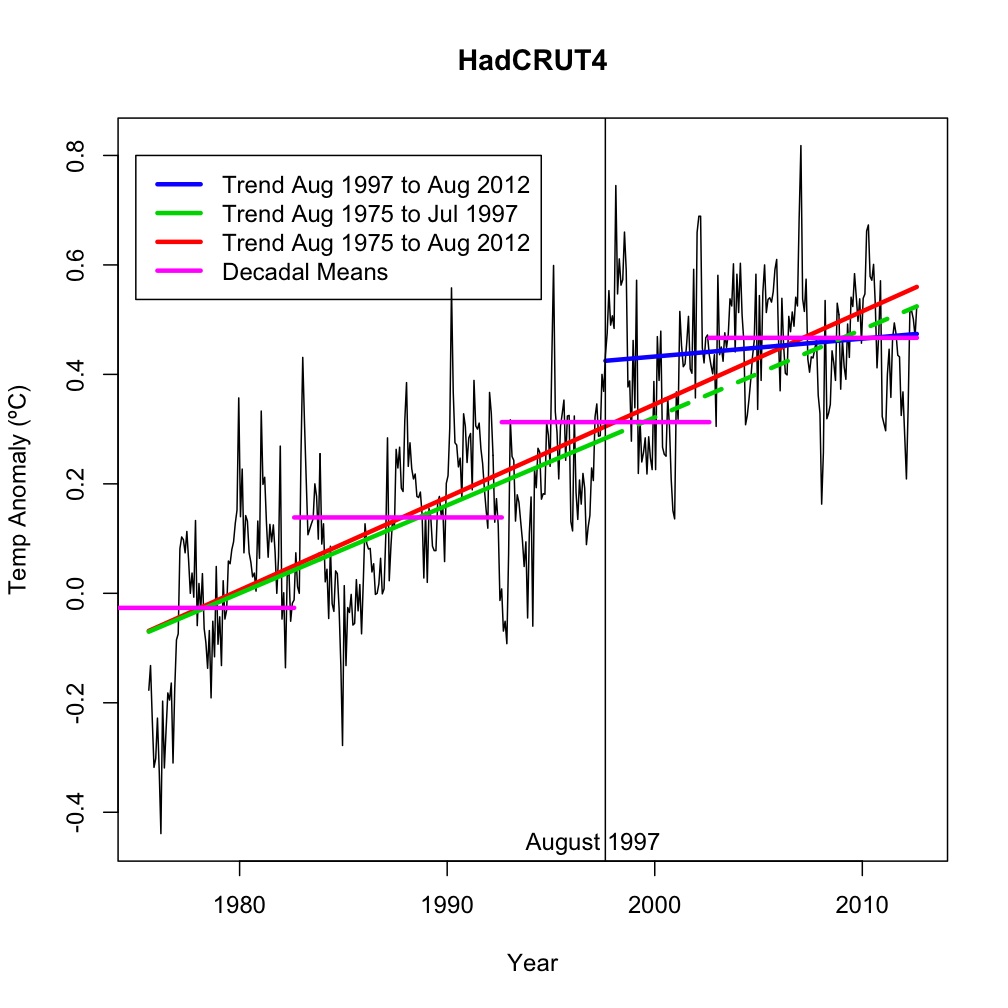 The first point might suggest to someone that the tendency of planet to warm as a function of increases in greenhouse gases has been interrupted. The second point might suggest that warming since 1997 has actually accelerated, the third point suggests that trends are quite stable, and the last point is actually quite astonishing, though fortuitous. Since all of these things (and many others) are equally true (in that their derivation from the underlying dataset is simply a mechanical application of standard routines), it is clear that our expectation for the future shouldn’t be simply based on an extrapolation of any one or two of them – the situation is too complex for that.

There are two main responses to complexity in science. One is to give up studying that subject and retreat to simpler systems that are more tractable (the ‘imagine a spherical cow’ approach), and the second is to try and peel away the layers of complexity slowly to see if, nonetheless, robust conclusions can be drawn. Both techniques have their advantages, and often it is the synthesis of the two approaches that in the end provides the most enlightenment. For some topics, the two paths have not yet met in the middle (neuroscience for instance), while for others they almost have (molecular spectrometry). The climate system as a whole is one of those topics where complexity is intrinsic, and while the behaviour of simpler systems or subsystems is fascinating, one can’t avoid looking directly at the emergent properties of the whole system – of which the actual temperature changes from month to month are but one.

We have found some ways to peel back the curtain though. For instance, we know that the shifts in equatorial conditions associated with El Niño/Southern Oscillation (ENSO) in the Pacific have a large impact on year-to-year temperature anomalies. So do volcanoes. Accounting for these factors can remove some of the year-to-year noise and make it easier to see the underlying trends. This is what Foster and Rahmstorf (2011) did, and the result shows that the underlying trends (once the effects of ENSO are subtracted) are remarkably constant:

Another way one might deal with the seemingly contradictory tangle of linear trends is to impose a constraint that any linear fits must be piecewise continuous i.e. every trend segment has to start from the end of the last trend segment. Many of you will have seen the SkepticalScience ‘Down the up escalator’ figure (a version of which featured in the PBS documentary last month) – which indicates that in a noisy series you can almost always find a series of negative trends regardless of the long term rise in temperatures. You will have noted that the negative trends always start at a warmer point than where the previous trend ended. This is designed to make the warming periods disappear (and sometimes this is done quite consciously in some ‘skeptic’ analyses). The model they are actually imposing is a linear trend, followed by an instantaneous jump and then another linear trend – a model rather lacking in physical basis!

However, if one imposes the piecewise continuous constraint, there are no hidden either warming or cooling jumps, and it is often a reasonable way to characterise the temperature evolution. If you looked for a single breakpoint in the whole timeseries i.e. places where the piecewise linear trend actually improves the fit the most, you would pick Apr 1910, or Feb 1976. There are no reasons either statistically or physically to think that the climate system response to greenhouse gases actually changed in August 1997. But despite the fact that August 1997 was shamelessly cherry-picked by David Rose because it gives the lowest warming trend to the present of any point before 2000, we can still see what would happen if we imposed the constraint that any fit needs to be continuous: 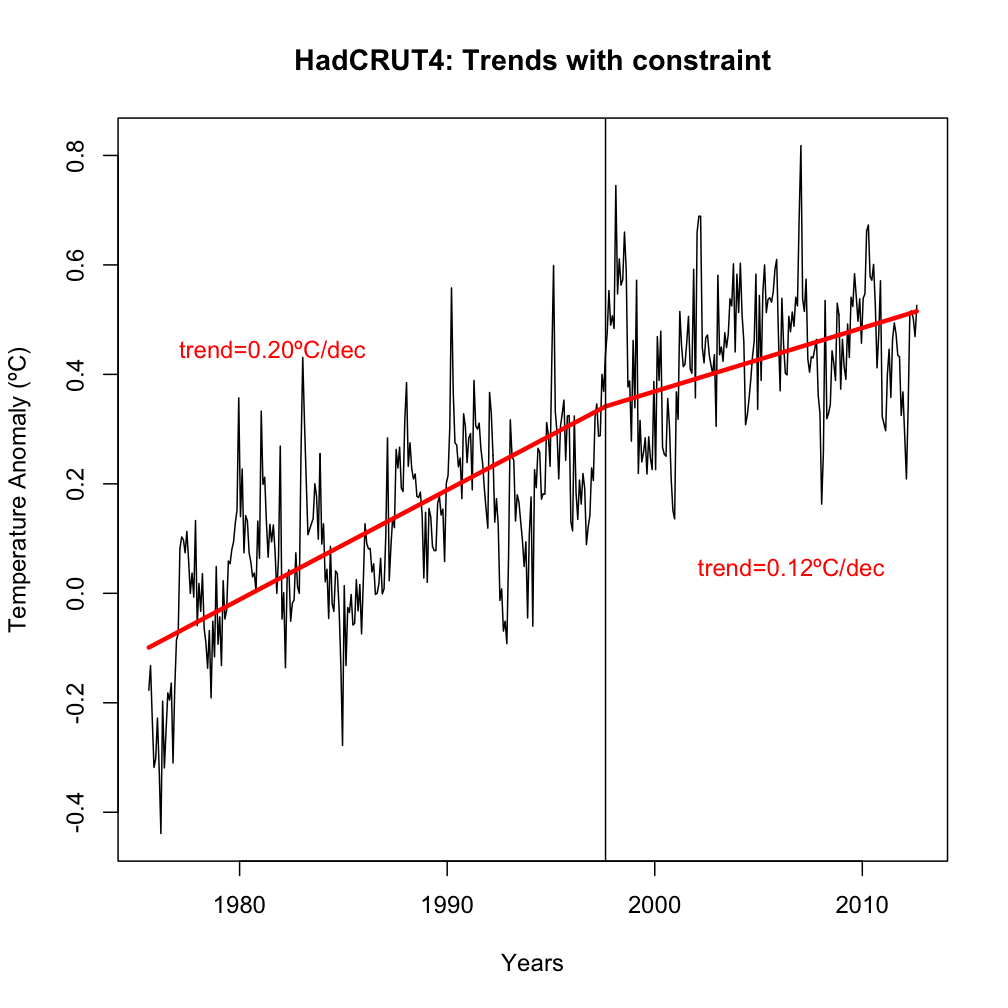 A different view, no?

But let’s go back to the fundamental issue – what do all these statistical measures suggest for future trends?

If we assume for a moment that the ENSO variability and volcanoes are independent of any change in greenhouse gases or solar variability (reasonable for volcanoes, debatable for ENSO), then the work by Foster and Rahmstorf, or Thompson et al (2009) to remove those signals will reveal the underlying trends that will be easier to attribute to the forcings. This is not to say that ENSO is the only diagnostic of internal variability that is important, but it is the dominant factor in the global mean unforced interannual variability. Given as well that we don’t have skillful predictions of ENSO years in advance, future trends are best thought of as being composed of an underlying trend driven by external drivers, with a wide range of ENSO (and other internal modes) imposed on top.

We can derive the underlying trend related to external forcings from the GCMs – for each model, the underlying trend can be derived from the ensemble mean (averaging over the different phases of ENSO in each simulation), and looking at the spread in the ensemble mean trend across models gives information about the uncertainties in the model response (the ‘structural’ uncertainty) and also about the forcing uncertainty – since models will (in practice) have slightly different realisations of the (uncertain) net forcing (principally related to aerosols). Importantly, the ensemble mean trend is often closely related to the long term trend in any one specific realisation, while the short term trends in single realisations are not.

In any specific model, the range of short term trends in the ensemble is quite closely related to their simulation of ENSO-like behaviour. I say “ENSO-like”, rather than “ENSO” since the mechanisms resolved in the models vary widely in their realism. Consequently, some models have tropical Pacific variability that is smaller than observed, while for some it is larger than observed (this is mostly a function of the ocean model resolution and climatological depth of the equatorial thermocline – but a full description is beyond the scope of a blog post). Additionally, the spectra of ENSO-like behaviour can be quite different across models, or even for century scale periods in the same simulation (see this presentation on the GFDL model by Andrew Wittenberg for examples). Thus it is an open question whether the CMIP3 or CMIP5 models completely span the range of potential ENSO behaviour in the future – and that is assuming that there is no impact of climate change on the ENSO statistics. Though if there is an effect in the real world, the century-scale variance seen in the GFDL model for instance, would mean that it will take a long time to reliably detect in the observations. 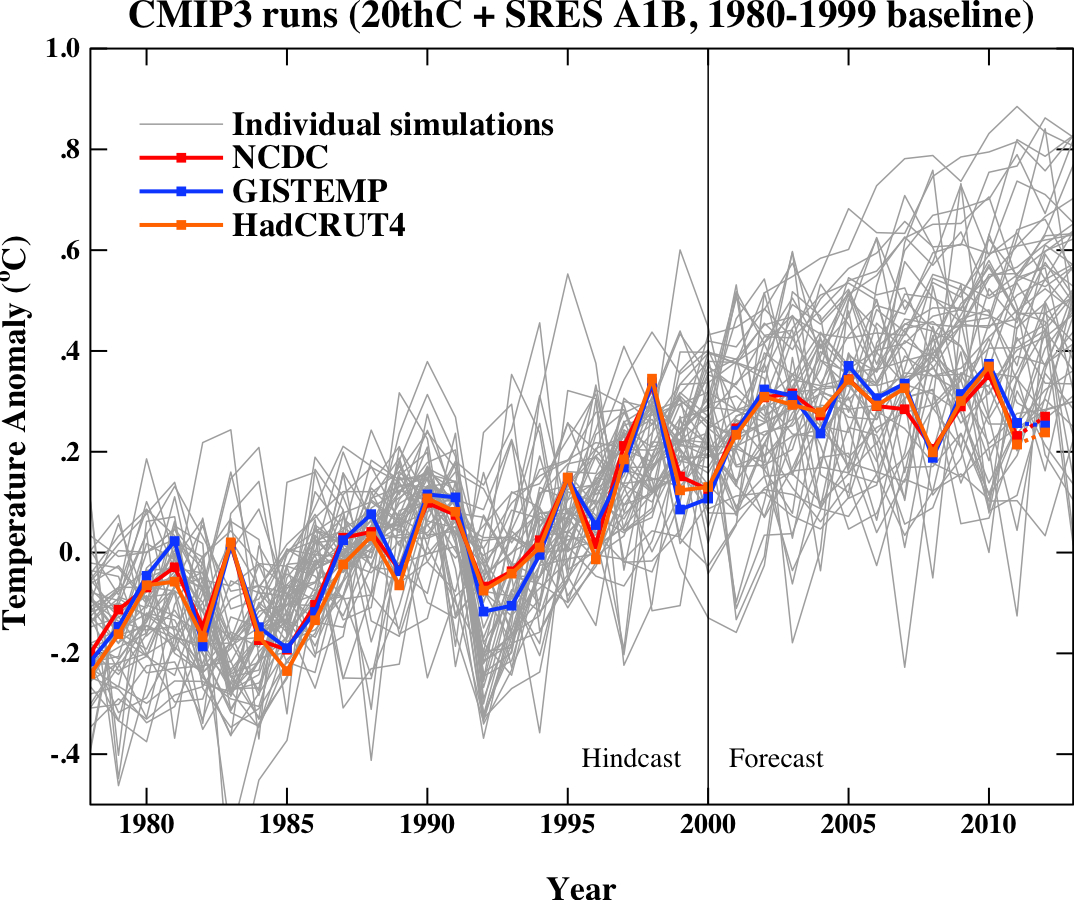 We saw above that the ENSO-corrected underlying trends are very consistent with the models’ underlying trends and we can also see that the actual temperatures are still within the model envelope (2012 data included to date). This is not a very strong statement though, and more work could perhaps be done to construct a better forecast using the underlying trends in the models and statistical models for the ENSO and internal variability components inferred from observations, rather than purely from model realisations. It is also worth pointing out that the CMIP5 estimates of ENSO variance might be significantly improved over what was seen in CMIP3.

So, to conclude, if you think that future ‘global warming’ is tied to the underlying long term trend in surface temperatures, there is no evidence from HadCRUT4 to warrant changing expectations (and no physical reasons to either). However, if you think that the best estimate of the future comes from extrapolating the minimum trend that you can find over short time periods in single estimates of surface temperatures, then you are probably going to be wrong.