You are here: Home / Climate Science / The heat is on in West Antarctica

Regular followers of RealClimate will be aware of our publication in 2009 in Nature, showing that West Antarctica — the part of the Antarctic ice sheet that is currently contributing the most to sea level rise, and which has the potential to become unstable and contribute a lot more (3 meters!) to sea level rise in the future — has been warming up for the last 50 years or so.

Our paper was met with a lot of skepticism, and not just from the usual suspects. A lot of our fellow scientists, it seems, had trouble getting over their long-held view (based only on absence of evidence) that the only place in Antarctica that was warming up was the Antarctica Peninsula. To be fair, our analysis was based on interpolation, using statistics to fill in data where it was absent, so we really hadn’t proven anything; we’d only done an analysis that pointed (strongly!) in a particular direction.

It has been a strange couple of years in limbo: we have known with certainty for at least two years that our results were basically correct, because there was a great deal of very solid corroborating evidence, including the borehole temperature data that confirmed our basic findings, and data from automatic weather stations near the center of West Antarctica that we hadn’t used, but which Andy Monaghan at Ohio State (now NCAR) had shown also corroborated our results. But most of this work was unpublished until very recently, so it wasn’t really usable information. 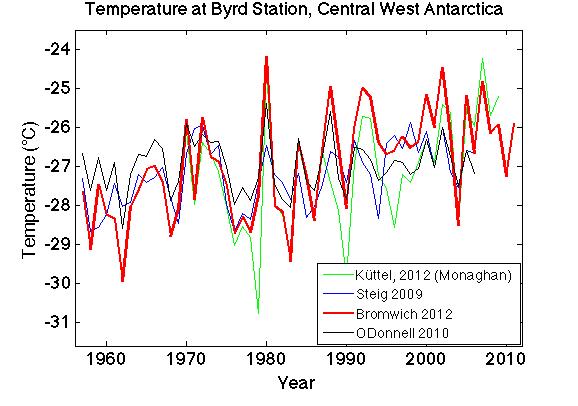 So it was a nice early Christmas present to see the publication of a new assessment by the well-known guru of Antarctic meteorology, David Bromwich, along with his students and colleagues at Ohio State, the University of Wisconsin (who run the U.S. automatic weather station program in Antarctica) and NCAR, which back up our results. Actually, they do more than back-up our results: they show that our estimates were too conservative and that West Antarctica is actually warming by about a factor of two more than we estimated. They also agree with the key interpretation of the results that both we and David Schneider and colleagues at NCAR have presented: that in the winter and spring seasons, when the most rapid warming is occurring in West Antarctica, the driver has been changes in the tropical Pacific, not the ozone hole (which is invoked too frequently, in my view, to explain everything from penguin populations to sea ice changes).

The borehole temperature data were published earlier this year by Orsi et al. in Geophysical Research Letters. The new temperature reconstruction of Monaghan was included as part of a paper (Küttel et al.) on ice core records in Climate Dynamics, also earlier this year; it was also included in the reconstruction in Schneider et al. 2011 in Climate Dynamics. Both showed unambiguously that West Antarctic is warming up, as fast as the Antarctic Peninsula. Bromwich et al. gets this same result again.

If it sounds like I don’t think Bromwich et al.’s results are anything new, let me correct that impression. The contribution of this new paper is huge. Bromwich et al. rely almost entirely on local data to produce the best-possible record of temperature from one location — Byrd Station in central West Antarctica. In contrast, our work relied heavily on interpolation of data from weather stations some distance from West Antarctica. Why didn’t we use the same data Bromwich et al. did? Well, we did, but the problem is that the Byrd Station record is actually several different records, taken at different times using different instruments. We felt that we could not splice these records together into one continous record, because instrument inter-calibration issues could easiily create spurious trends.

One of the chief contributions of the Bromwich team is that they carefully checked the calibration on the various temperature sensors and dataloggers that are used in the Byrd automatic weather station. It turns out that there were significant calibration issues and that correcting for them makes the temperature higher in the 1990s but somewhat lower in the 2000s (though still higher than in the 1960 – 1980s). That is a compelling finding, because it puts the weather station data in better agreement with the climate forecast reanalysis data explaining the cause of the winter warming trends (as described e.g. in Ding et al., 2011; 2012).

Another new aspect of the Bromwich et al. paper is that it shows that there is significant warming even in summer time in West Antarctica. This could arguably bode ill for the West Antarctic Ice Sheet, since if current trends continue it will mean more melting on the ice shelves there — ultimately leading to their collapse, as has already happened on the Antarctic Peninsula.

As Anais Orsi and I discuss in a News & Views article — not yet online, but evidently to be in the Februrary print issue of Nature Geoscience [Update, Steig and Orsi is now online here]— Bromwich et al.’s results are objectively the best record available of the last five decades of temperature change in West Antarctica. Note that the while the borehole data are the most important independent validation, they provide only a smoothed look at past temperatures; they do not resolve interannual or decadal variability. Bromwich et al.’s updated record for Byrd Station should now be routinely incorporated into global temperature compilations such as those done by GISS and CRU. Doing so will, I think, change the picture of climate change in the Southern Hemisphere, and not insignificantly.

There’s a lot more to be said — including some reasons why I don’t think the likelihood of surface-snow-melt-driven collapse of ice shelves is very high in West Antarctica — but I’m off to enjoy a respite from the internet for a few days. I’m going somewhere nice and cold and snowy.

Happy Holidays to all.

Reading materials, with links, below.

39 Responses to "The heat is on in West Antarctica"