You are here: Home / Climate Science / Climate modelling / Going with the wind

A new paper in Nature Climate Change out this week by England and others joins a number of other recent papers seeking to understand the climate dynamics that have led to the so-called “slowdown” in global warming. As we and others have pointed out previously (e.g. here), the fact that global average temperatures can deviate for a decade or longer from the long term trend comes as no surprise. Moreover, it’s not even clear that the deviation has been as large as is commonly assumed (as discussed e.g. in the Cowtan and Way study earlier this year), and has little statistical significance in any case. Nevertheless, it’s still interesting, and there is much to be learned about the climate system from studying the details.

Several studies have shown that much of the excess heating of the planet due to the radiative imbalance from ever-increasing greenhouses gases has gone into the ocean, rather than the atmosphere (see e.g. Foster and Rahmstorf and Balmaseda et al.). In their new paper, England et al. show that this increased ocean heat uptake — which has occurred mostly in the tropical Pacific — is associated with an anomalous strengthening of the trade winds. Stronger trade winds push warm surface water towards the west, and bring cold deeper waters to the surface to replace them. This raises the thermocline (boundary between warm surface water and cold deep water), and increases the amount of heat stored in the upper few hundred meters of the ocean. Indeed, this is what happens every time there is a major La Niña event, which is why it is globally cooler during La Niña years. One could think of the last ~15 years or so as a long term “La-Niña-like” anomaly (punctuated, of course, by actual El Niño (like the exceptionally warm years 1998, 2005) and La Niña events (like the relatively cool 2011).

A very consistent understanding is thus emerging of the coupled ocean and atmosphere dynamics that have caused the recent decadal-scale departure from the longer-term global warming trend. That understanding suggests that the “slowdown” in warming is unlikely to continue, as England explains in his guest post, below. –Eric Steig

For a long time now climatologists have been tracking the global average air temperature as a measure of planetary climate variability and trends, even though this metric reflects just a tiny fraction of Earth’s net energy or heat content. But it’s used widely because it’s the metric that enjoys the densest array of in situ observations. The problem of course is that this quantity has so many bumps and kinks, pauses and accelerations that predicting its year-to-year path is a big challenge. Over the last century, no single forcing agent is clearer than anthropogenic greenhouse gases, yet zooming into years or decades, modes of variability become the signal, not the noise. Yet despite these basics of climate physics, any slowdown in the overall temperature trend sees lobby groups falsely claim that global warming is over. Never mind that the globe – our planet – spans the oceans, atmosphere, land and ice systems in their entirety.

This was one of the motivations for our study out this week in Nature Climate Change (England et al., 2014)  With the global-average surface air temperature (SAT) more-or-less steady since 2001, scientists have been seeking to explain the climate mechanics of the slowdown in warming seen in the observations during 2001-2013. One simple way to address this is to examine what is different about the recent decade compared to the preceding decade when the global-mean SAT metric accelerated. This can be quantified via decade-mean differences, or via multi-decadal trends, which are roughly equivalent if the trends are more-or-less linear, or if the focus is on the low frequency changes.

A first look at multi-decadal trends over the past two decades (see below) shows a dramatic signature in the Pacific Ocean; with sea surface cooling over the east and central Pacific and warming in the west, extending into the subtropics. Sea-level records also reveal a massive trend across the Pacific: with the east declining and the west rising well above the global average.  Basic physical oceanography immediately suggests a trade wind trend as the cause: as this helps pile warm water up in the west at the expense of the east. And sure enough, that is exactly what had occurred with the Pacific wind field. 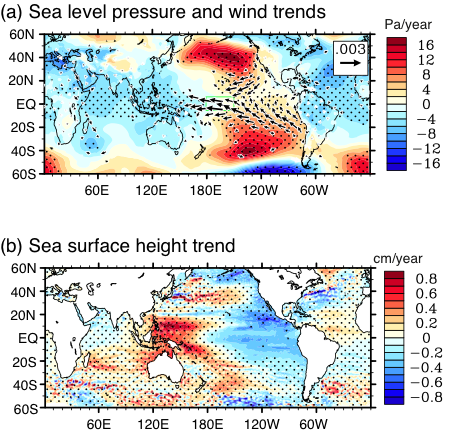 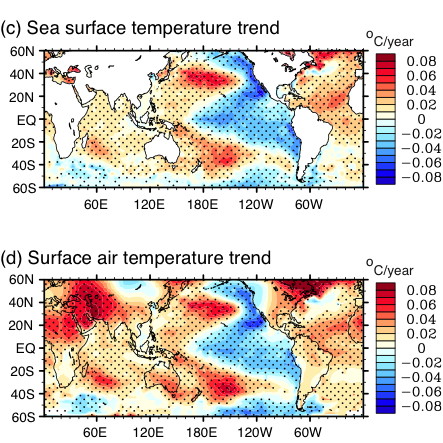 A consistent picture has now emerged to explain the slowdown in global average SAT since 2001 compared to the rapid warming of the 1980s and 1990s: this includes the link between hiatus decades and the Interdecadal Pacific Oscillation, the enhanced ocean heat uptake in the Pacific (see previous posts) and the role of East Pacific cooling. All of these factors are consistent with a picture of strengthened trade winds, enhanced heat uptake in the western Pacific thermocline, and cooling in the east – as you can see in this schematic: 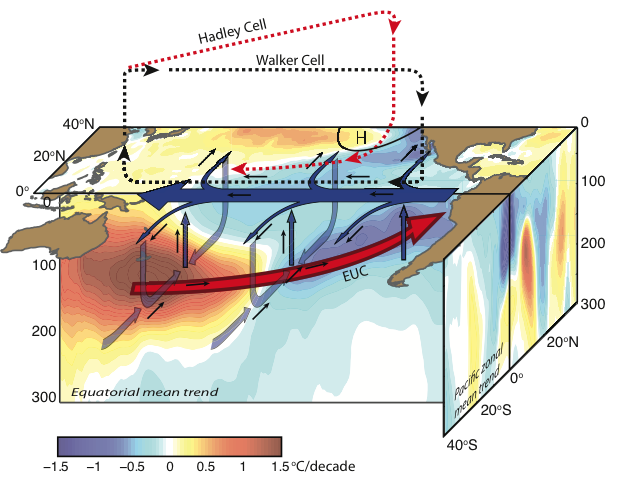 As our study set out to reconcile the emerging divide between observations and the multi-model mean across CMIP5 and CMIP3 simulations, we took a slightly different approach, although there are obvious parallels to Kosaka and Xie’s study assessing the impact of a cooler East Pacific.  In particular, we incorporated the recent 20-year trend in trade winds into both an ocean and a climate model, to quantify its impact. It turns out that with this single perturbation, much of the ‘hiatus’ can be simulated. The slowdown in warming occurs as a combined result of both increased heat uptake in the Western Pacific Ocean, and increased cooling of the east and central Pacific (the latter leads to atmospheric teleconnections of reduced warming in other locations).  We find that the heat content change within the ocean accounts for about half of the slowdown, the remaining half comes from the atmospheric teleconnections from the east Pacific.

Unfortunately, however, the hiatus looks likely to be temporary, with projections suggesting that when the trade winds return to normal strength, warming is set to be rapid (see below). This is because the recent accelerated heat uptake in the Pacific Ocean is by no means permanent; this is consistent with the shallow depths at which the excess heat can now be found, at the 100-300m layer just below the surface mixed layer that interacts with the atmosphere. [Ed: though see also Mike’s commentary on this aspect of the paper] 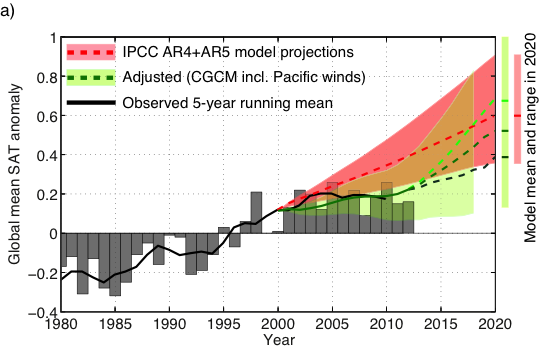 Even if the excess heat fluxed into the ocean were longer-term, burying the heat deep in the ocean would not come without its consequences; ocean thermal expansion translates this directly into sea-level rise, with Western Pacific Island nations already acutely aware of this from the recent trends.

Our study addresses some important topics but also raises several new questions.  For example, we find that climate models do not appear to capture the observed scale of multi-decadal variability in the Pacific – for example, none reproduce the magnitude of the observed Pacific trade wind acceleration – the best the models can do is around half this magnitude.  This begs the question as to why this is the case: given the positive ocean-atmosphere feedbacks operating to drive these strengthened trade winds, the answer could lie in the ocean, the atmosphere, or both.

The study also discusses the unprecedented nature of the wind trends, and suggests that only around half of the trend can be explained by the IPO. So where does the other half come from?  The Indian Ocean is as one possibility, given its recent rapid warming; but models capture this in greenhouse gas forced projections. What else might be accelerating the winds in the Pacific beyond what you’d expect to see from the underlying SST fields alone?

The study also points to the length of the wind trend as being crucial to the hiatus; arguing that anything much shorter, like a decadal wind trend, would not have resulted in nearly as much heat uptake by the ocean. This is related to the time-scale for ocean adjustment to wind forcing in the subtropics: in short it takes time to spin-up the ocean circulation response, and then more time to see this circulation inject a significant amount of heat into the ocean thermocline. Given the ocean inertia to change, what happens when the trade winds next weaken back to average values?  Does the subducted heat get mixed away before this can resurface, or does the heat find a way to return to the surface when the winds reverse?  Our initial work suggests the latter: as when we forced the wind anomalies to abate, warming out of the hiatus can be rapid, eventually recovering the warming that paused during the hiatus. So this suggests that whenever the current wind trends reverse, warming will resume as projected, and in time the present “pause” will be long forgotten by the climate system. [Ed: see again Mike’s piece for a discussion of an alternative hypothesis–namely, the possibility that a La Niña-like state is part of the response to anthropogenic forcing itself].

Of course, other factors could have also contributed to part of the recent slowdown in the globally averaged air temperature metric: increased aerosols, a solar minimum, and problems with missing data in the Arctic. Summing up all of the documented contributions to the hiatus, spanning ocean heat uptake, reduced radiation reaching Earth’s surface, and data gaps, climate scientists have probably accounted for the hiatus twice over. Of course each effect is not linearly additive, but even so, many experts are now asking why hasn’t the past decade been one of considerable cooling in global mean air-temperatures?  Or put another way, why isn’t the model-observed gap even wider?  One way to explain this is that the current generation of climate models may be too low in their climate sensitivity – an argument made recently by Sherwood et al in relation to unresolved cloud physics. A perhaps completely unexpected conclusion when analysts first noticed the model-observed divergence progressing over the past decade.

95 Responses to "Going with the wind"