You are here: Home / Climate Science / Arctic and Antarctic / Faking it

Every so often contrarians post old newspaper quotes with the implication that nothing being talked about now is unprecedented or even unusual. And frankly, there are lots of old articles that get things wrong, are sensationalist or made predictions without a solid basis. And those are just the articles about the economy.

However, there are plenty of science articles that are just interesting, reporting events and explorations in the Arctic and elsewhere that give a fascinating view into how early scientists were coming to an understanding about climate change and processes. In particular, in the Atlantic sector of the Arctic the summer of 1922 was (for the time) quite warm, and there were a number of reports that discussed some unprecedented (again, for the time) observations of open water. The most detailed report was in the Monthly Weather Review: 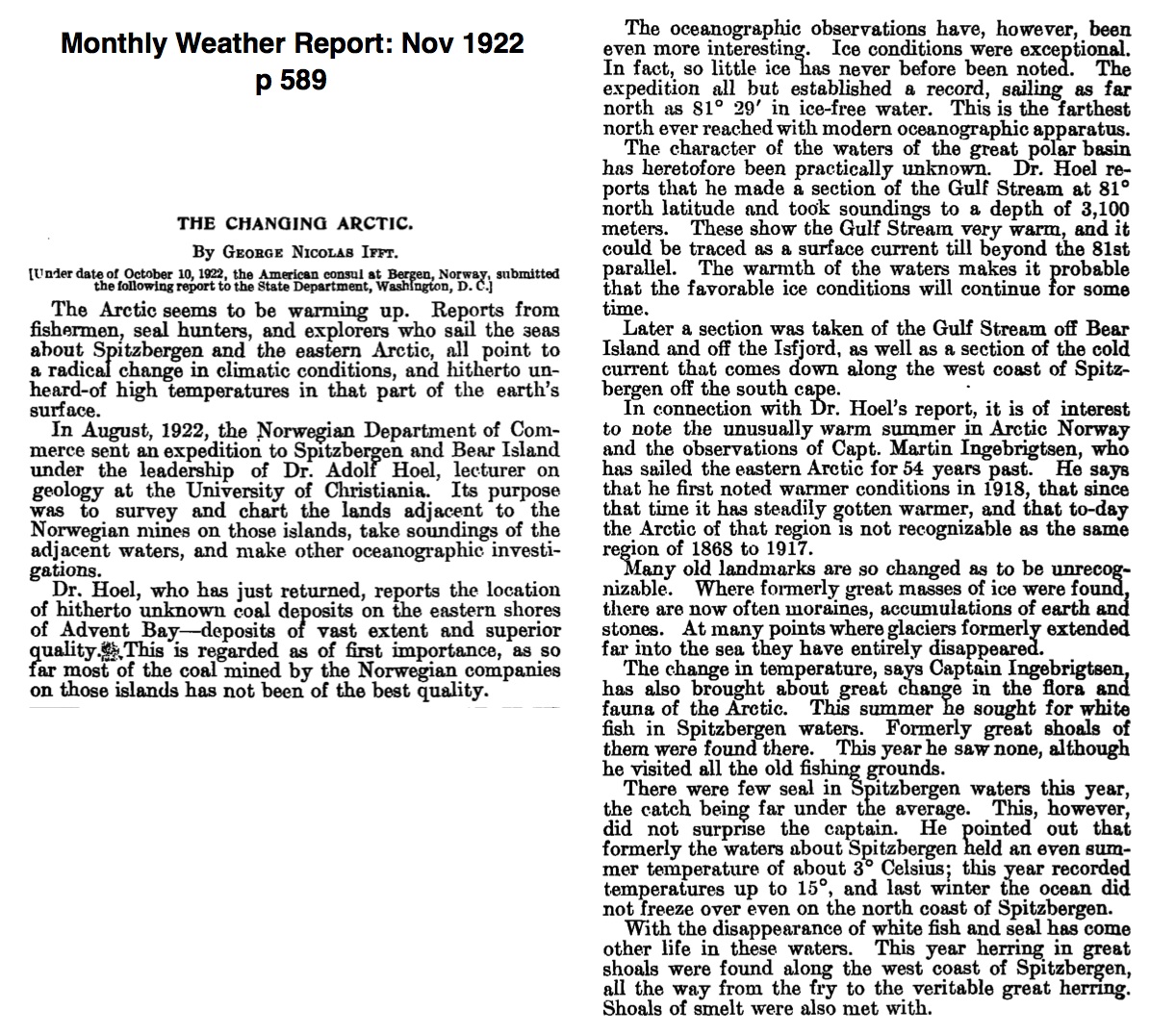 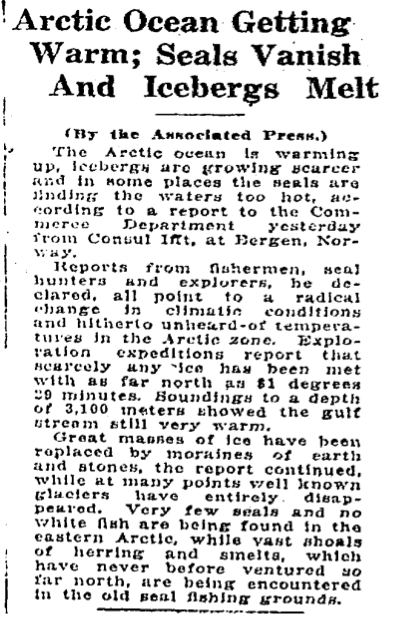 The same report was picked up by the Associated Press and short summary articles appeared in the Washington Post and L.A. Times on Nov 2nd (right). As you can read, the basic story is that open water was seen up to 81º 29’N near Spitzbergen (now referred to as Svalbard), and that this was accompanied by a shift in ecosystems and some land ice melting. It seems that the writers were more concerned with fishing than climate change though.

This clip started showing up around Aug 2007 (this is the earliest mention I can find). The main point in bringing it up was (I imagine) to have a bit of fun by noting the similarity of the headline “Arctic Ocean Getting Warm” and contemporaneous headlines discussing the very low sea ice amounts in 2007. Of course, this doesn’t imply that the situation was the same back in 1922 compared to 2007 (see below).

The text of Washington Post piece soon started popping up on blogs and forums. Sometime in late 2009, probably as part of a mass-forwarded email (remember those?), the text started appearing with the following addition (with small variations, e.g. compare this and this):

I apologize, I neglected to mention that this report was from November 2, 1922. As reported by the AP and published in The Washington Post

However, the text was still pretty much what was in the Washington Post article (some versions had typos of “Consulafft” instead of “Consul Ifft” (the actual consul’s name) and a few missing words). Snopes looked into it and they agreed that this was basically accurate – and they correctly concluded that the relevance to present-day ice conditions was limited.

But sometime in January 2010 (the earliest version I can find is from 08/Jan/2010), a version of the email started circulating with an extra line added:

“Within a few years it is predicted that due to the ice melt the sea will rise and make most coastal cities uninhabitable.”

This is odd on multiple levels. First of all, the rest of the piece is just about observations, not predictions of any sort. Nor is there any source given for these mysterious predictions (statistics? soothsaying? folk wisdom?). Indeed, since ice melt large enough to ‘make most coastal cities uninhabitable’ would be a big deal, you’d think that the Consul and AP would have been a little more concerned about the level of the sea instead of the level of the seals. In any case, the line is completely made up, a fiction, an untruth, a lie.

But now, instead of just an observation that sounds like observations being made today, the fake quote is supposed to demonstrate that people (implicitly scientists) have been making alarmist and unsupported claims for decades with obvious implications. This is pretty low by any standards.

The article with the fake quote has done the rounds of most of the major contrarian sites – including the GWPF, right-wing leaning local papers (Provo, UT), magazines (Quadrant in Australia, Canada Free Press) and blogs (eg. Small dead animals). The only pseudo-sceptic blog that doesn’t appear to have used it is WUWT! (though it has come up in comments). This is all despite some people noting that the last line was fake (at least as early as April 2011). Some of the mentions even link to the Snopes article (which doesn’t mention the fake last line) as proof that their version (with the fake quote) is authentic.

Last week it was used again by Richard Rahn in the Washington Times, and the fake quote was extracted and tweeted by CFACT, which is where I saw it.

So we have a situation where something real and actually interesting is found in the archives, it gets misrepresented as a ‘gotcha’ talking point, but someone thinks it can be made ‘better’ and so adds a fake last line to sex it up. Now with twitter, with its short quotes, some contrarians only quote the fakery. And thus a completely false talking point is created out of the whole cloth.

Unfortunately, this is not unusual.

To understand why the original story is actually interesting, we need a little context. Estimates of Arctic sea ice go back to the 19th Century from fishing vessels and explorers though obviously they have got better in recent decades because of the satellite coverage. The IPCC AR5 report (Figure 4.3) shows a compilation of sea ice extent from HadISST1 (which is being updated as we speak), but it is clear enough for our purposes: 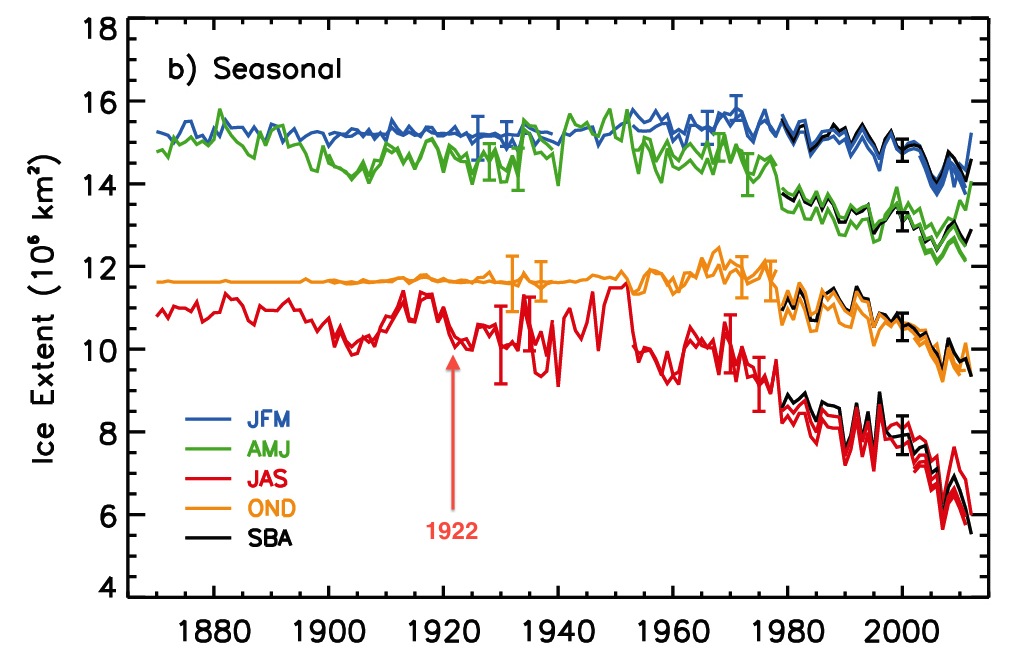 I have annotated the summer of 1922, which did see quite a large negative excursion Arctic-wide compared to previous years, though the excursion is perhaps not that unusual for the period. A clearer view can be seen in the Danish ice charts for August 1921 and 1922 (via the Icelandic Met Office): 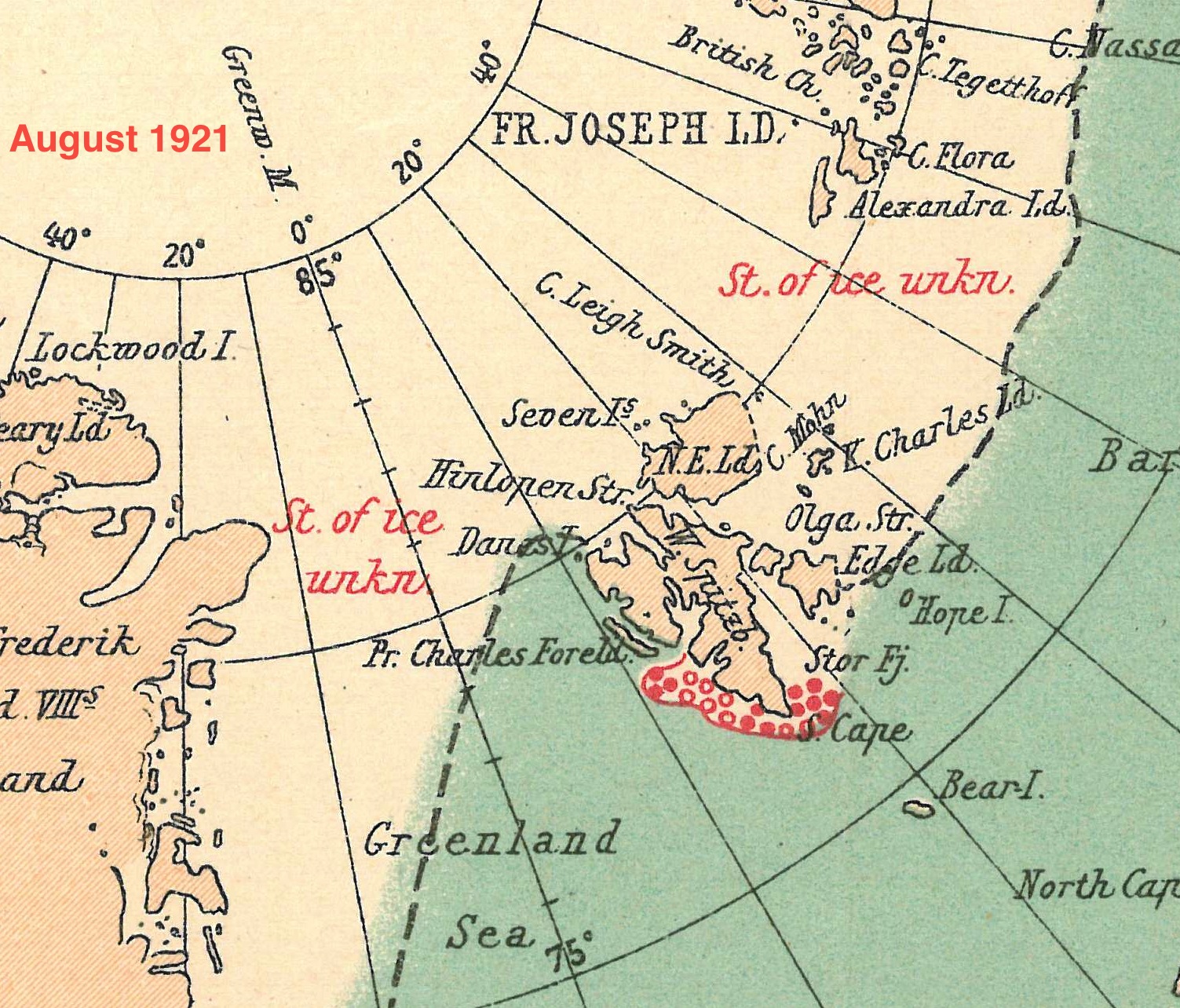 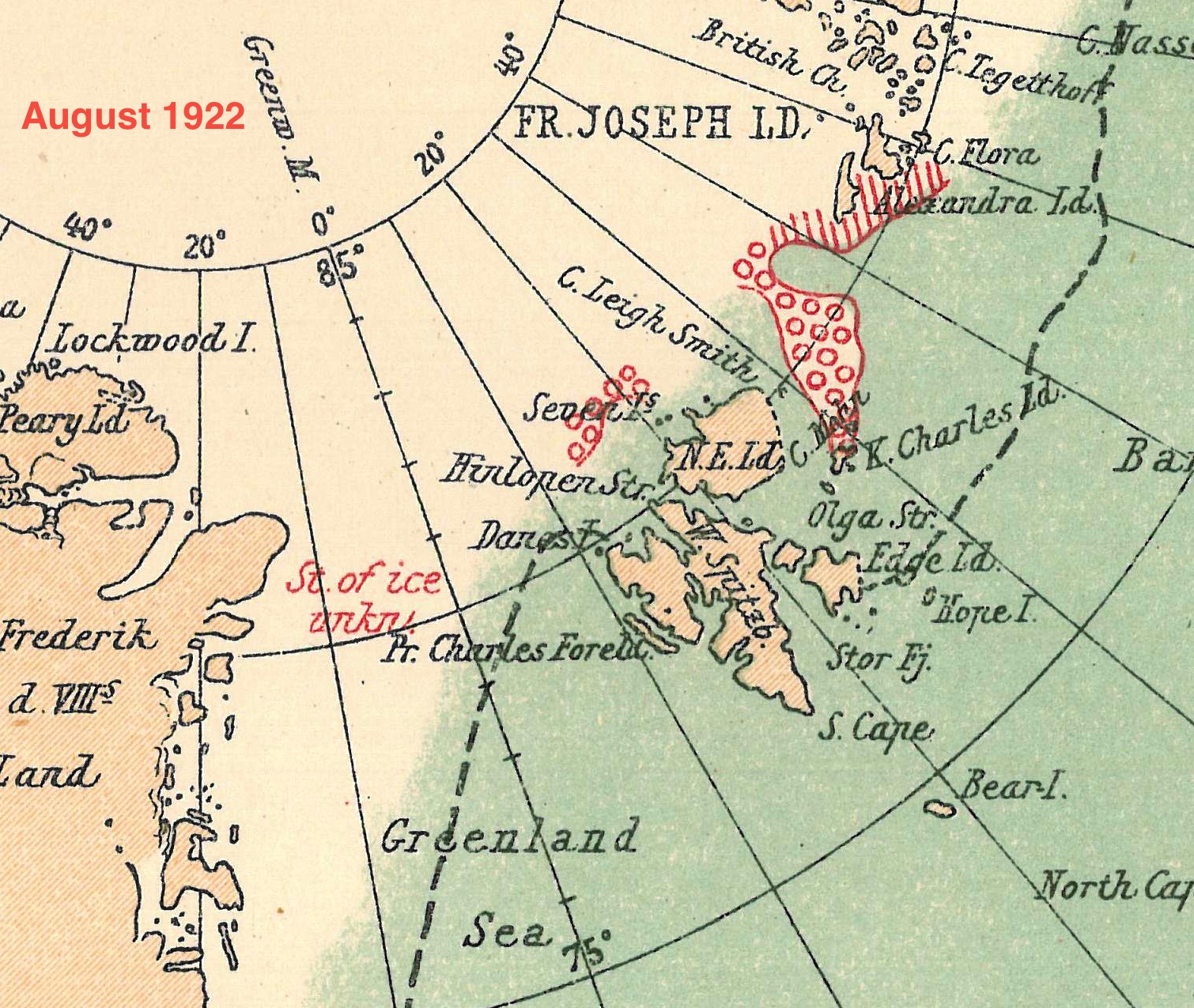 The latitude for open-water in the 1922 figure is around 81ºN, as reported by the Consul. Browsing other images in the series indicates that Spitzbergen almost always remained ice-bound even in August, so the novelty of the 1922 observation is clear.

But what of now? We can look at the August 2013 operational ice charts (that manually combine satellite and in situ observations) from the Norwegian Met Office, and focus on the area of Svalbard/Spitzbergen. Note that 2013 was the widely touted year that Arctic sea ice ‘recovered’: 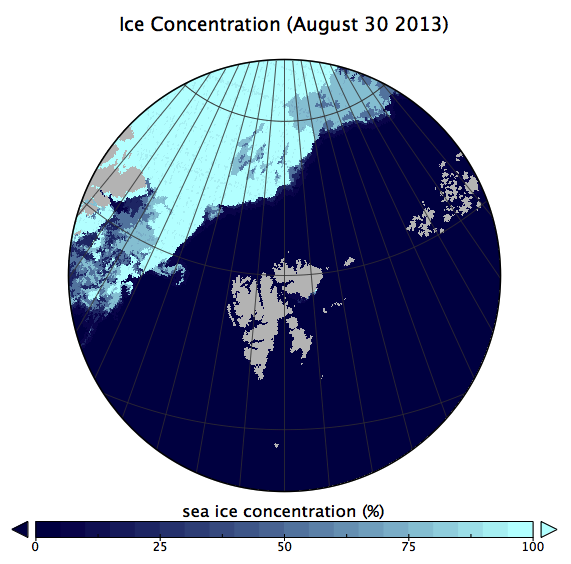 The open-water easily extends to past 84ºN – many hundreds of kilometers further north than the ‘unprecedented’ situation in 1922. Data from the last 4 years shows some variability of course, but by late August there is consistently open-water further north than 81ºN 30′. The Consul’s observation, far from being novel, is now commonplace.

This implies that this article – when seen in context – is actually strongly confirming of a considerable decline in Arctic sea ice over the last 90 years. Not that CFACT is going to tweet that.

21 Responses to "Faking it"