Several dynamical mechanisms for this have been proposed recently. Francis and Vavrus (GRL 2012) argued that a reduction of the north-south temperature gradient would cause weaker zonal winds (winds blowing west to east) and therefore a slower eastward propagation of Rossby waves. A change in Rossby wave propagation has not yet been detected (Barnes 2013) but this does not mean that it will not change in the future. Slowly-traveling waves (or quasi-stationary waves) would lead to more persistent and therefore more extreme weather. Petoukhov et al (2013) actually showed that several recent high-impact extremes, both heat waves and flooding events, were associated with high-amplitude quasi-stationary waves.

Intuitively it makes sense that slowly-propagating Rossby waves lead to more surface extremes. These waves form in the mid-latitudes at the boundary of cold air to the north and warm air to the south. Thus, with persistent strongly meandering isotherms, some regions will experience cold and others hot conditions. Moreover, slow wave propagation would prolong certain weather conditions and therefore lead to extremes on timescales of weeks: One day with temperatures over 30oC in say Western Europe is not really unusual, but 10 or 20 days in a row will be.

But although it intuitively makes sense, the link between high-amplitude Rossby waves and surface extremes was so far not properly documented in a statistical way. It is this piece of the puzzle which is addressed in the new paper by Screen and Simmonds recently published in Nature Climate Change (“Amplified mid-latitude planetary waves favour particular regional weather extremes”).

In a first step they extract the 40 most extreme months in the mid-latitudes for both temperature and precipitation in the 1979-2012 period, using all calendar months. They do this by averaging absolute values of temperature and precipitation anomalies, which is appropriate since planetary waves are likely to induce both negative and positive anomalies simultaneously in different regions. This way they determine the 40 most extreme months and also 40 moderate months, i.e., those months with the smallest absolute anomalies. By using monthly-averaged data, fast-traveling waves are filtered out and thus only the quasi-stationary component remains, i.e. the persistent weather conditions. Next they show that roughly half of the extreme months were associated with statistically significantly amplified waves. Vice versa, the moderate months were associated with reduced wave activity. So this nicely confirms statistically what one would expect. 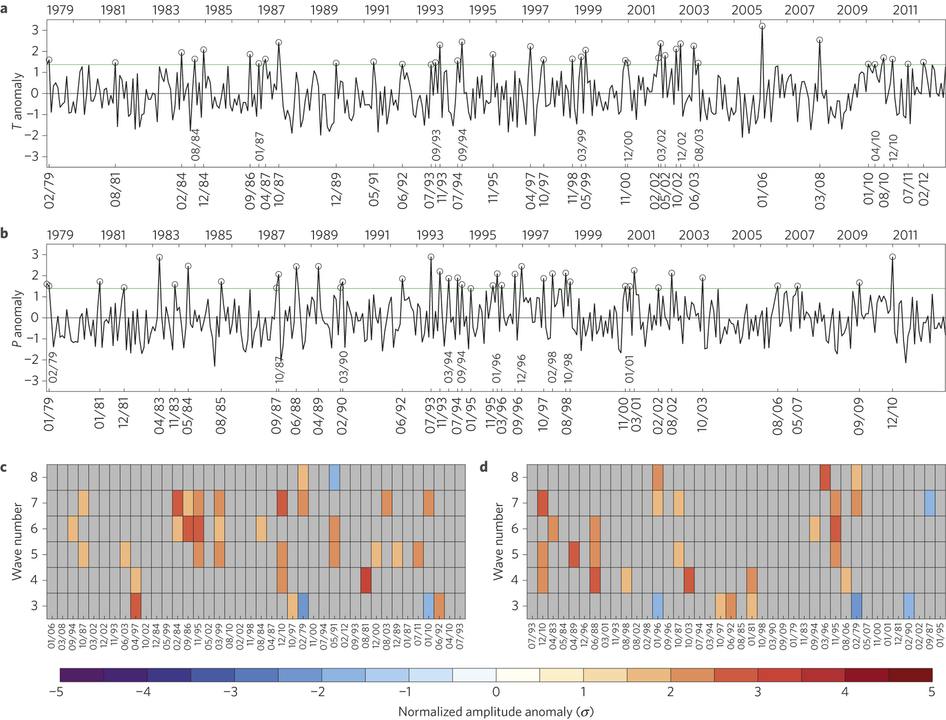 Figure: a,b, Normalized monthly time series of mid-latitude–(35°–60° N) mean land-based absolute temperature anomalies (a) and absolute precipitation anomalies (b), 1979–2012. The 40 months with the largest values are identified by circles and labelled on the lower x axis, and the green line shows the threshold value for extremes. c,d, Normalized wave amplitude anomalies, for wave numbers 3–8, during 40 months of mid-latitude–mean temperature extremes (c) and precipitation extremes (d). The months are labelled on the abscissa in order of decreasing extremity from left to right. Grey shading masks anomalies that are not statistically significant at the 90% confidence level; specifically, anomalies with magnitude smaller than 1.64σ, the critical value of a Gaussian (normal) distribution for a two-tailed probability p = 0.1. Red shading indicates wave numbers that are significantly amplified compared to average and blue shading indicates wave numbers that are significantly attenuated compared to average. [Source: Screen and Simmonds, Nature climate Change]

The most insightful part of the study is the regional analysis, whereby the same method is applied to 7 regions in the Northern Hemisphere mid-latitudes. It turns out that especially those regions at the western boundary of the continents (i.e., western North America and Europe) show the most significant association between surface extremes and planetary wave activity. Here, moderate temperatures tend to be particularly associated with reduced wave amplitudes, and extremes with increased wave amplitudes. Further eastwards this link becomes less significant, and in eastern Asia it even inverts: Here moderate temperatures are associated with amplified waves and extremes with reduced wave amplitudes. An explanation for this result is not discussed by the authors. Possibly, it could be explained by the fact that low wave amplitudes imply predominantly westerly flow. Such westerlies will bring moderate oceanic conditions to the western boundary regions, but will bring air from the continental interior towards East Asia.

Finally, the authors redo their analysis once more but now for each tail of the distribution individually. Thus, instead of using absolute anomalies, they treat cold, hot, dry and wet extremes separately. This way, they find that amplified quasi-stationary waves “increase probabilities of heat waves in western North America and central Asia, cold outbreaks in eastern North America, droughts in central North America, Europe and central Asia and wet spells in western Asia.” These results hint at a preferred position (i.e., “phase”) of quasi-stationary waves.

With their study, the authors highlight the importance of quasi-stationary waves in causing extreme surface weather. This is an important step forward, but of course many questions remain. Has planetary wave activity changed in recent decades or is it likely to do so under projected future warming? And, if it is changing, is the rapid Arctic warming indeed responsible? 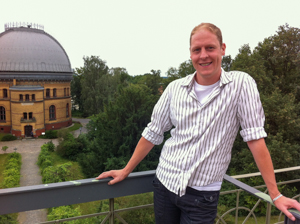 Dim Coumou works as a senior scientist at the Potsdam Institute for Climate Impact Research, where he is leading a new research group which studies the links between large scale circulation and extreme weather.