You are here: Home / Climate Science / Aerosols / The mystery of the offset chronologies: Tree rings and the volcanic record of the 1st millennium

Volcanism can have an important impact on climate. When a large volcano erupts it can inject vast amounts of dust and sulphur compounds into the stratosphere, where they alter the radiation balance. While the suspended dust can temporarily block sunlight, the dominant effect in volcanic forcing is the sulphur, which combines with water to form sulphuric acid droplets. These stratospheric aerosols dramatically change the reflectivity, and absorption profile of the upper atmosphere, causing the stratosphere to heat, and the surface to cool; resulting in climatic changes on hemispheric and global scales.

Annually-resolved ice core and tree-ring chronologies provide opportunities for understanding past volcanic forcing and the consequent climatic effects and impacts on human populations. It is common knowledge that you can tell the age of a tree by counting its rings, but it is also interesting to note that the size and physiology of each ring provides information on growing conditions when the ring formed. By constructing long tree ring chronologies, using suitable species of trees, it is possible to reconstruct a precisely-dated annual record of climatic conditions.

Ice cores can provide a similar annual record of the chemical and isotopic composition of the atmosphere, in particular volcanic markers such as layers of volcanic acid and tephra. However, ice cores can suffer from ambiguous layers that introduce errors into the dating of these layers of volcanic acid. To short-circuit this, attempts have been made to identify know historical eruptions within the ice records, such as Öraefajökull (1362) and Vesuvius (AD 79). This can become difficult since the ice chronologies can only be checked by finding and definitively identifying tephra (volcanic glass shards) that can be attributed to these key eruptions; sulphate peaks in the ice are not volcano specific.

Thus, it is fundamentally important to have chronological agreement between historical, tree-ring and ice core chronologies: The ice cores record the magnitude and frequency of volcanic eruptions, with the trees recording the climatic response, and historical records evidencing human responses to these events.

But they don’t quite line up…

The importance of frost rings

An additional piece of evidence is the existence and dating of “frost ring” phenomena observed in bristlecone pines growing at high altitude in Western North America. These rings form when temperatures drop well below freezing for extended periods during the tree’s growing season, and are evidenced by physical scarring of that year’s growth ring that can be caused by volcanically induced climate dislocation – an idea first suggested by LaMarche and Hirschboeck in 1984. 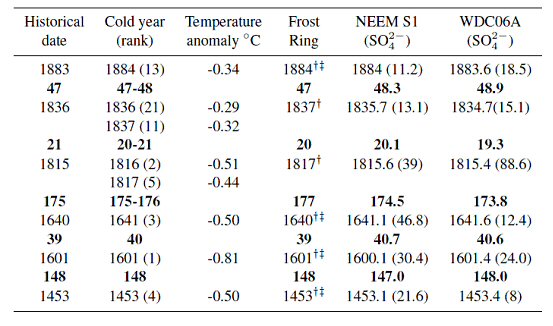 Figure 1: Dates of large historical eruptions (Siebert et al., 2011) within the last 600 years that likely caused significant Northern Hemisphere negative temperature anomalies as noted and ranked by Briffa et al. (1998). Bristlecone pine frost rings as recorded by LaMarche and Hirschboeck (1984)(†) and Salzer and Hughes (2007)(‡), are also listed, as are the start years of large ice acid signals (deposition SO42- in units of Kg/km2 are given in parentheses) observed in the NEEM S1 and WDC06A ice cores Sigl et al. (2013). Space analysis between successive phenomena (highlighted in bold) shows high consistency, and that large volcanoes can induce frost damage in bristlecone pines.

If we take some notable volcanoes in the past 600 years (Figure 1), we can confirm that frost rings in bristlecone pines are good indicators of large explosive volcanic eruptions, similar to the known coincidence of hemispheric cooling evidenced in growth rings of European trees in the years around historically dated eruptions. For this period, dates for large volcanic acid signals in ice cores are consistent with both historical and tree ring observations. However, this consistent linkage breaks down in the 1st millennium when frost ring dates and ice core acidity dates are compared. So if frost rings are indicative of large explosive volcanism in recent centuries, is it that the ice cores may be misdated in the 1st millennium? This is the question we explore in a recent paper (Baillie and McAneney, 2015). 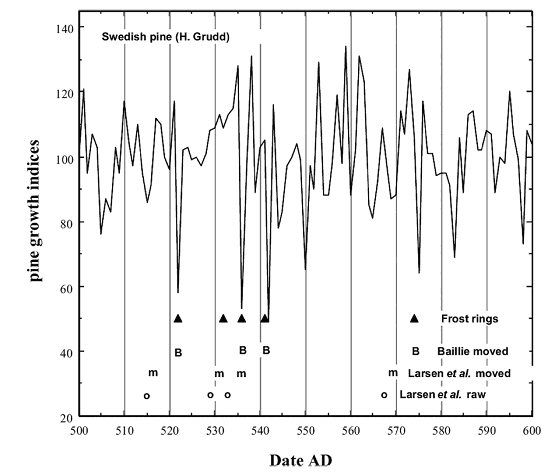 In 2008 and 2010, Baillie used bristlecone pine frost rings as well as temperature sensitive Swedish pine tree ring chronologies to propose that the dating of the Greenland ice cores was too old by approximately 7 years in the period before the 7th century AD, see Figure (2). In our current paper, we reinforce this proposed re-dating by looking at ice core data published since 2010, from both Greenland (NEEM S1 (Sigl et al., 2013)) and Antarctica (WDC06A (Sigl et al., 2013), Law Dome (Plummer et al., 2012)) as well as the Antarctic DML core (Traufetter et al., 2004). We consider the space intervals between frost rings, and compare them to space intervals between ice acid layers in each core during the 6th and 7th centuries, noting that there is a similarity in the event intervals. The similar space intervals in each data set would appear to suggest that trees and ice cores are recording the same volcanic events, but that the ice cores are offset from tree rings. (See tables 1-3 in our paper for more details). All cores except DML appear to be too old with respect to tree-ring dates, with the latter being slightly too young.

Why should we listen to the trees?

At this point one might quite rightly stop and ask whether it is realistic that a large set of independently replicated ice cores could be misdated? Might the problem instead lie with the dendrochronology? Fortunately, dendrochronological replication is often provided by comparing chronologies produced by independent workers in independent laboratories. In this respect, it is extremely unlikely that any of the tree ring data used in this exercise is incorrectly dated. [Though see this post discussing this exact issue – Ed.]

Figure 3: Historical dust veil events as noted by Stothers and Rampino (1983) in the period from 100 BC to AD 700, compared with bristlecone pine frost rings as recorded by LaMarche and Hirschboeck (1984)(†) and Salzer and Hughes (2007)(‡) and observation of ice acid in the GICC05 (Vinther et al. 2006) and NEEM S1 timescales (Sigl et al., 2013). Space analysis demonstrates that while there is a high consistency between phenomena spacing (highlighted in bold), ice core dates are offset by approximately 7 years.

One could also re-examine the hypothesis that frost rings are useful volcanic markers. In fact, it is possible to have some frost rings without any evidence of explosive volcanism, presumably occurring due to extremes in local weather, but, as shown above, they do seem to record large volcanic eruptions in recent times very well indeed. Why would that change in the 1st millennium? Furthermore, when a space analysis is performed between historically-dated severe dust veils between the 1st century BC and the 7th century AD, these compare well with frost rings, but again volcanic horizons in Greenland ice appear to be too old by 7-years (see Figure 3). Accepting, of course, that historical documentation is correct, the dated bristlecone pine frost rings agree perfectly as a response to the volcanically induced climatic events. We conclude then that these early ice core chronologies are at odds with both history and dendrochronology.

The implications of an ice core misdating are important. Global tree rings show that there was a major climatic event beginning in AD 536 lasting to at least AD 545, which may have been a catalyst for the Justinian plague in the 540s [This was discussed in a previous post in 2008 – Ed.]. Tree-rings suggest that this was a two stage event, with an initial abrupt reduction of tree growth at AD 536, a recovery over the next couple of years, followed by another abrupt reduction in tree growth following AD 540. This agrees extremely well with the frost rings at AD 536 and AD 541, and with the widely documented prolonged dust veil in Europe of AD 536. Current ice core chronologies conversely suggest that there was only one massive volcano in AD 536 which was responsible for the decade long climatic event (Larsen et al. 2008). They showed large volcanic signals in the ice at AD 529 and AD 533.5 and proposed that the latter related to AD 536 (see Figure 4). With the proposed re-dating of the ice cores, it now appears that the two massive volcanoes occurred in AD 536 and 540.5, which fits better with a two-stage event. 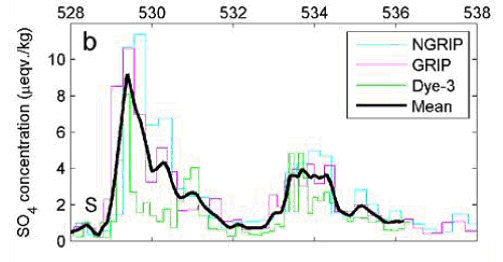 The suggested ice dating offset would have other implications. It would imply that the identification of Vesuvius tephra in Greenland ice dating to AD 79 (Barbante et al, 2013) is in error, and it would also bring to prominence a major eruption in 44 BC, the year of Caesar’s death; the acidity associated with this eruption currently having an ice-acid date around 50 BC. 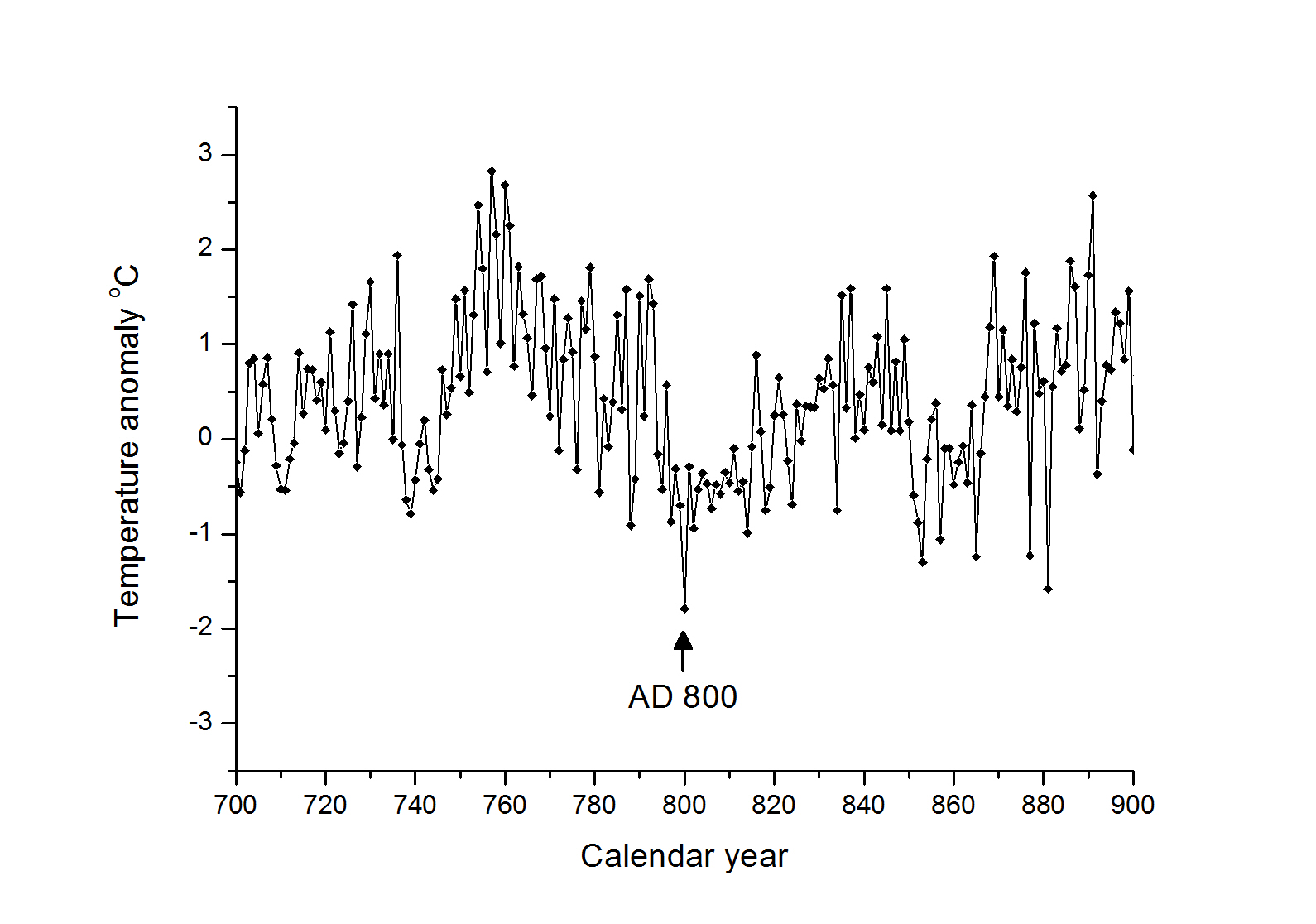 Figure 5: Swedish pine temperature reconstruction showing sudden cooling at AD 800, which may be volcanically induced. The nearest acid layer in NEEM is dated to AD 793 (Grudd, 2010).

With the proposed dating revision, it is possible to tease out other potential candidates for unrecognised historical eruptions. Writing around AD 810-15 the chronicler Theophanes the Confessor records that after the capture and blinding of Byzantine emperor Constantine VI in August AD 797:

“The sun was darkened for seventeen days and did not emit its rays so that ships
lost course and drifted about. Everyone acknowledged that the sun withheld its rays
because the emperor had been blinded”

Such an event is suggestive of a volcanic dust veil or ash cloud observed from Constantinople, possibly from a Mediterranean eruption. The nearest acid signal in the NEEM S1 ice core occurs at 793.0 (Sigl et al., 2013), and is the only acid within +/-14 years of AD 797. Note that we are told Constantine’s blinding occurred after August 797, but we cannot know how long after. It is conceivable that the obscuration event could have been as much as a few years after the Constantine’s capture and blinding, but that the two events were associated as direct cause and effect by the popular psyche at the time, and recorded as such. It is thus tempting to link this event with the sudden cooling observed in Swedish pine that occurred in AD 800 (see Figure 5).

Another consequence might be that the current ice dating of the Icelandic Eldgjá eruption may need to be moved from around AD 933 to around AD 939/940. Sun et al. (2014) have identified stratigraphical evidence of Changbaishan eruption tephra in NEEM S1 lying 7 annual layers above Eldgjá tephra. Changbaishan can be dated to AD 946 by historical documents of local ash fall and unseasonably cold weather. This implies any ice dating offset occurs above this horizon. How far above is uncertain, though it is likely below the mid 13th century.

Tree rings cannot prove that ice cores are misdated; but the offset identified here should prompt a re-examination of the ice core chronology. If the dating revision proposed here is correct, it would rewrite the volcanic history of the 1st millennium. In particular, it would definitively show that the mid-6th century was not dominated by a single massive volcanic event in AD 536, but was also influenced by an important eruption in AD 540-541 – an event currently missing from all ice core and historical literature. The mystery deepens…

44 Responses to "The mystery of the offset chronologies: Tree rings and the volcanic record of the 1st millennium"