As is usual when people try too hard to delegitimise an approach or a paper, the criticisms tend to be a rag-bag of conceptual points, trivialities and, often, confused mis-readings – so it proves in this case. Nonetheless, no paper is ever totally complete, and there are often additional sensitivity tests that could have been added and further clarifications on the methodology would be useful. Indeed, sometimes there are even choices that in retrospect would have been chosen differently and, yay, even errors. Understanding what impact that might have on the paper’s conclusions are interesting things to explore in a blog since they rarely reach a level that would necessitate another paper.

Lewis enumerates 6 supposedly fundamental problems in the paper. To paraphrase, they are as follows:

Point 1 is a misunderstanding of the concept of climate sensitivity and in any case would apply to every single paper being discussed including Lewis and Curry and Otto et al. It has nothing to do with whether those papers give reliable results. Point 2 begs the question entirely (why do analyses of transient simulations under-estimate ECS?). Point 3 is worth discussing in more detail and we do so below. Point 4 (on the OHC) misunderstands that MEA15 were trying to assess whether real world analyses give the right result. Using TOA radiative imbalances instead of ocean heat uptake (which cannot be directly observed with sufficient precision) would be pointless. But there are different ways to treat the OHC and we return to that below. Point 5 is easily tested and found not to matter in the slightest (as could easily be inferred from the graphs). Point 6 is freely admitted to, indeed, we already wrote a paper on that exact issue (Marvel et al, 2015a). It makes no difference to our conclusion since the breakdown into single forcings is in order to explain the fact that the historical all-forcing runs have a lower slope than the GHG or CO2 responses, and for that, the accuracy of the linearity assumption is totally adequate.

In making his points, Lewis makes a number of errors that all go the way of making his points superficially more plausible. He conflates different model versions (fully interactive simulations in Shindell et al (the p3 runs in CMIP5), with the non-interactive runs used in MEA15 (p1 runs)), and different forcing definitions (Fi and Fa). His calculations didn’t use the decadal mean forcings/responses that were used in MEA15 and thus he ‘found’ a -0.29 W/m2 ‘error’ in our graphs. [Despite having been told of this error weeks ago, no acknowledgement of this mistake has been made on any of the original posts].

I should be clear that we are not claiming infallibility and with ever-closer readings of the paper we have found a few errors and typos ourselves which we will have corrected in the final printed version of the paper. For instance…

In MEA15 we used a nominal F2xCO2 in equation 2 of 4.1 W/m2 to scale the slopes seen in Fig. 1 to a TCR and ECS for 2xCO2. This is strictly the stratospherically adjusted forcing (Schmidt et al, 2014) and was thus incorrectly described and incorrectly referenced in the paper [we have notified the Nature Climate Change editors of this and it will be corrected]. In our internal tests the difference the exact value made was small and we used a single value in the iRF and ERF cases. In retrospect, this was an inconsistent choice. A better choice would have been to use, separately, the iRF and ERF values in the two cases, namely 4.5 W/m2 and 4.3 W/m2. As can be seen in the update to our online material the redone Figs 1 and 2, with these choices still show the same results: 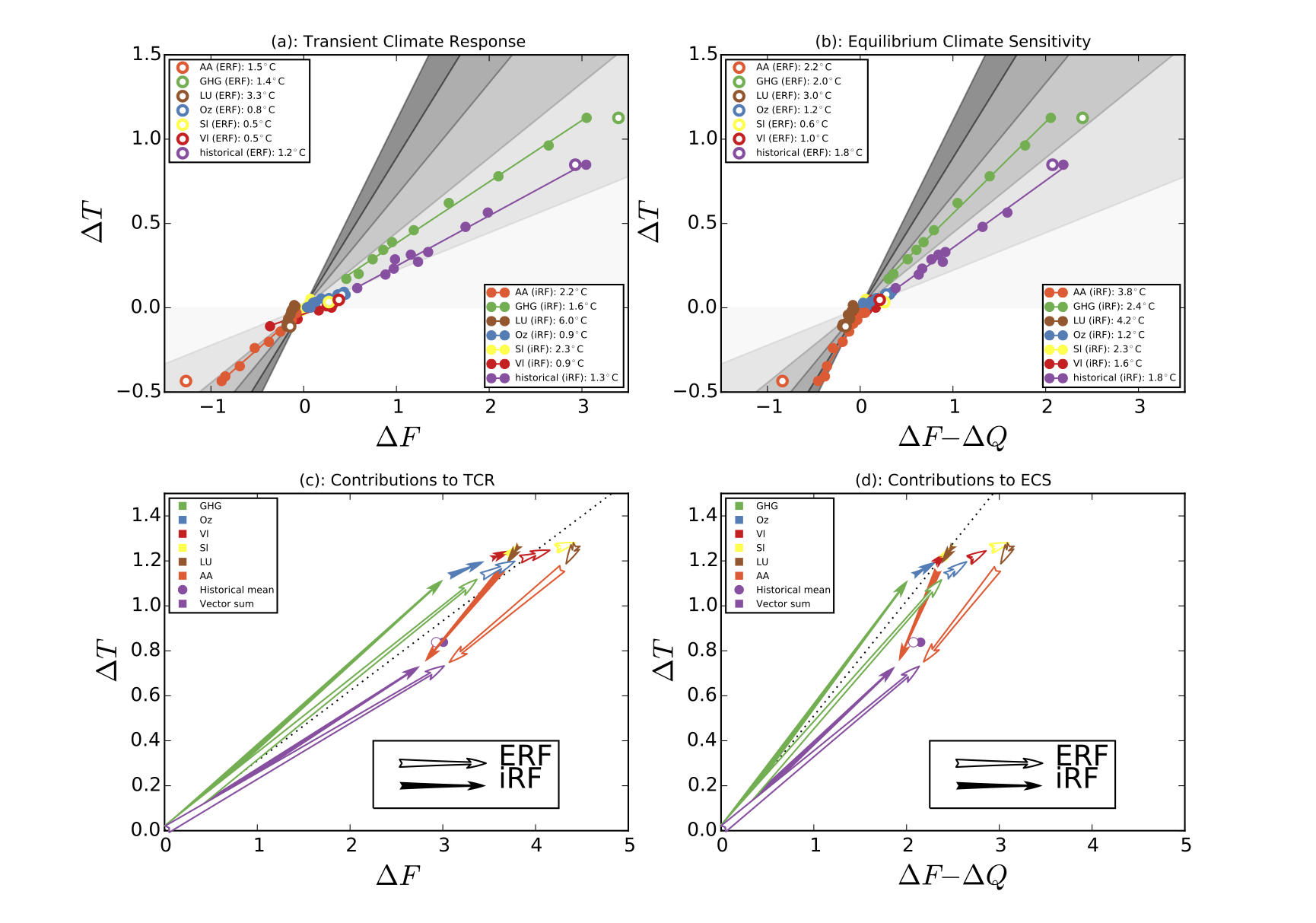 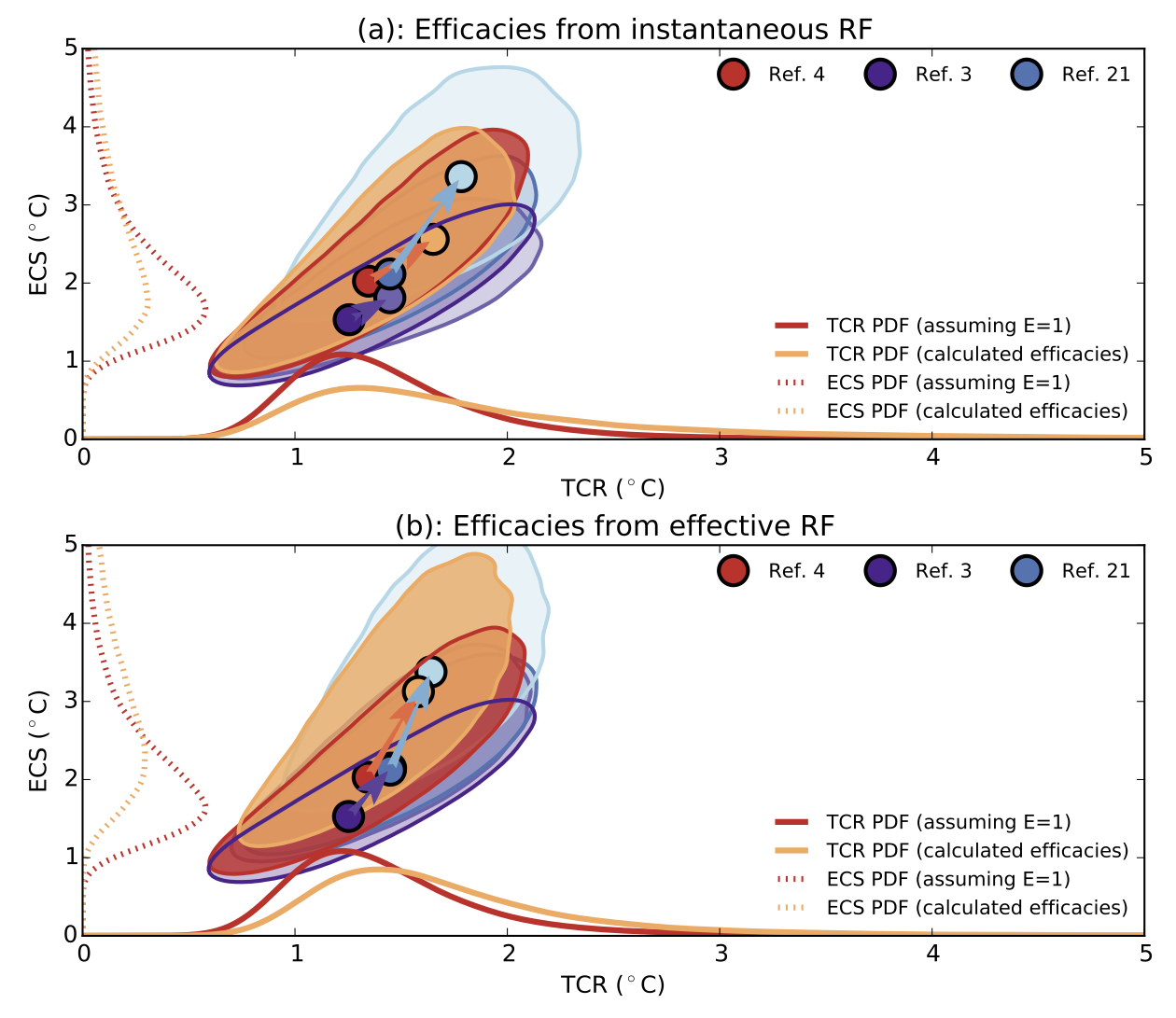 The bottom line conclusions are unchanged: taking account of the efficacies makes the resulting estimates for sensitivity larger. The likely ranges for the corrected analyses are slightly affected however.

There are a couple of questions that have been raised that do bear further exploration. Would it make a difference if you used stratospherically adjusted forcings (Fa/RF in the IPCC AR5)? What if you account for the additional energy storage (apart from the ocean) in the system? These are relatively easy to do (though we did need to calculate the Fa terms).

The bottom line is that using adjusted forcings or assuming that ocean heat uptake is only 94% of the energy imbalance makes no qualitative difference at all.

Lewis in subsequent comments has claimed without evidence that land use was not properly included in our historical runs [Update: This was indeed true for one of the forcing calculations], and that there must be an error in the model radiative transfer. He has also suggested that it is statistically permissible to eliminate outliers in the ensembles because he doesn’t like the result (it is not). These are mostly simply post hoc justifications for not wanting to accept the results.

When there are results that have implications for a broad swath of other papers, it’s only right that the results are examined closely. Lewis’ appraisal has indeed turned up two errors, and suggested further sensitivity experiments, which have both ended up strengthening the robustness of the basic result. The conclusion remains that sensitivity calculations which assume the efficacies of each forcing must be exactly 1, with no uncertainty, are simply no longer credible.

As we stated in the paper, this is a result from a single model and given that all models are flawed, it really needs to be reproduced by some other groups. What prevents that is the lack of thorough calculations of the net and individual forcings in the other climate models. Hopefully some of this discussion might prompt this effort elsewhere.

We wrote the paper to be ecumenical with respect to the estimates of 20th Century forcings – hence we just took 3 previously published sets of estimates at face value and applied the efficacies calculated in two (now three) different ways to their calculations. If one was to redo those papers, you would choose the efficacies most relevant to their calculations (i.e. the ERF derived values for Otto et al) along with their adjustment for the ocean heat uptake (in our sensitivity test), and conclude that instead of an ECS of 2.0ºC [likely range 1.4-3.2], you’d get 3.0ºC [likely range 1.8-6.2]. A result far more consistent with other lines of evidence.