Following on from the ‘interesting’ House Science Committee hearing two weeks ago, there was an excellent rebuttal curated by ClimateFeedback of the unsupported and often-times misleading claims from the majority witnesses. In response, Judy Curry has (yet again) declared herself unconvinced by the evidence for a dominant role for human forcing of recent climate changes. And as before she fails to give any quantitative argument to support her contention that human drivers are not the dominant cause of recent trends.

Her reasoning consists of a small number of plausible sounding, but ultimately unconvincing issues that are nonetheless worth diving into. She summarizes her claims in the following comment:

… They use models that are tuned to the period of interest, which should disqualify them from be used in attribution study for the same period (circular reasoning, and all that). The attribution studies fail to account for the large multi-decadal (and longer) oscillations in the ocean, which have been estimated to account for 20% to 40% to 50% to 100% of the recent warming. The models fail to account for solar indirect effects that have been hypothesized to be important. And finally, the CMIP5 climate models used values of aerosol forcing that are now thought to be far too large.

These claims are either wrong or simply don’t have the implications she claims. Let’s go through them one more time.

1) Models are NOT tuned [for the late 20th C/21st C warming] and using them for attribution is NOT circular reasoning.

Curry’s claim is wrong on at least two levels. The “models used” (otherwise known as the CMIP5 ensemble) were *not* tuned for consistency for the period of interest (the 1950-2010 trend is what was highlighted in the IPCC reports, about 0.8ºC warming) and the evidence is obvious from the fact that the trends in the individual model simulations over this period go from 0.35 to 1.29ºC! (or 0.84±0.45ºC (95% envelope)). 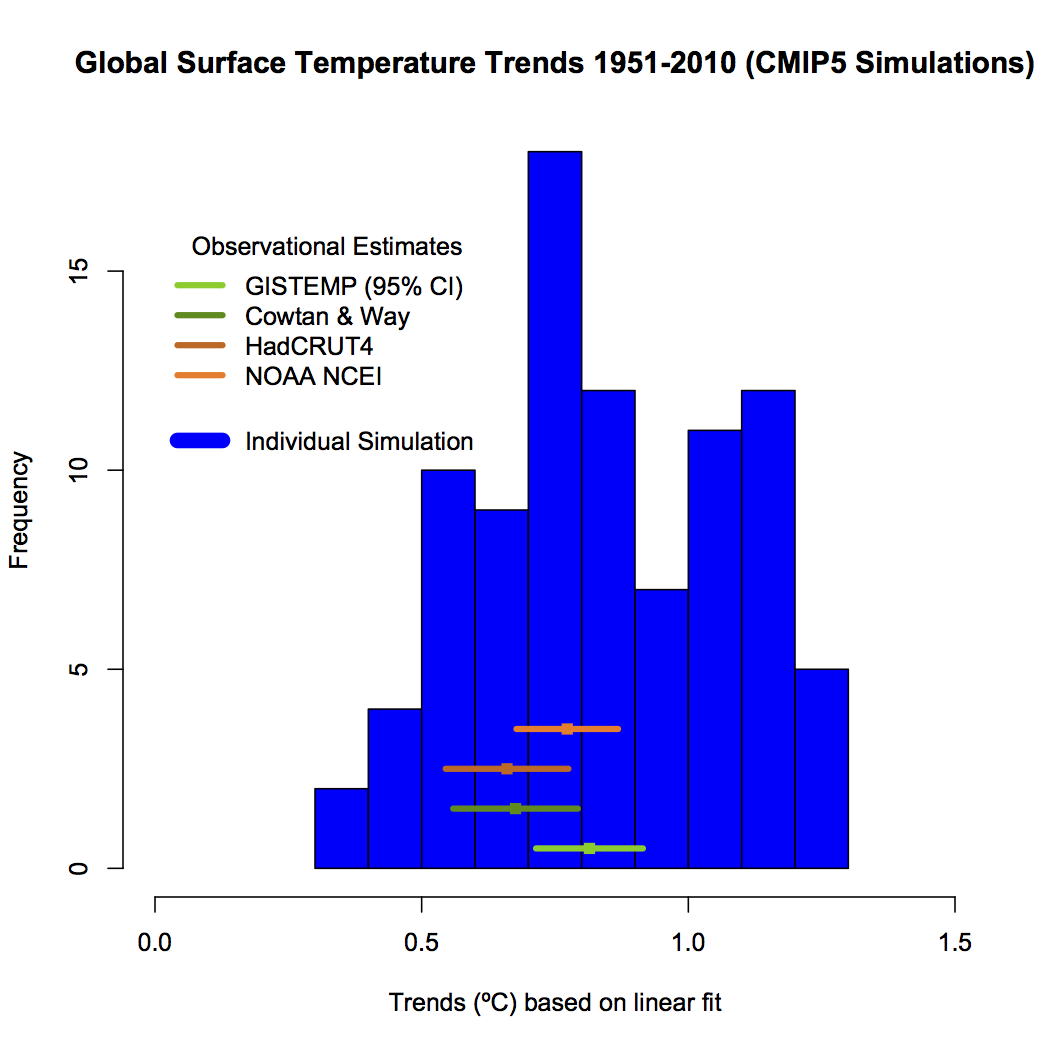 Ask yourself one question: Were these models tuned to the observed values?

Second, this is not how the attribution is done in any case. What actually happens is that the fingerprint of different forcings are calculated independently of the historical runs (using subsets of the drivers) and then matched to the observations using scalings for the patterns generated. Scaling factors near 1 imply that the models’ expected fingerprints fit reasonably well to the observations. If the models are too sensitive or not enough, that will come out in the factors, since the patterns themselves are reasonably robust. So models that have half the observed trend, or twice as much, can still help determine the pattern of change associated with the drivers. The attribution to the driver is based on the best fits of that pattern and others, not on the mean or trend in the historical runs.

Patterns of variability that don’t match the predicted fingerprints from the examined drivers (the ‘residuals’) can be large – especially on short-time scales, and look in most cases like the modes of internal variability that we’ve been used to; ENSO/PDO, the North Atlantic multidecadal oscillation etc. But the crucial thing is that these residuals have small trends compared to the trends from the external drivers. We can also put these modes directly into the analysis with little overall difference to the results.

The key observation here is the increase in ocean heat content over the last half century (the figure below shows three estimates of the changes since 1955). This absolutely means that more energy has been coming into the system than leaving. 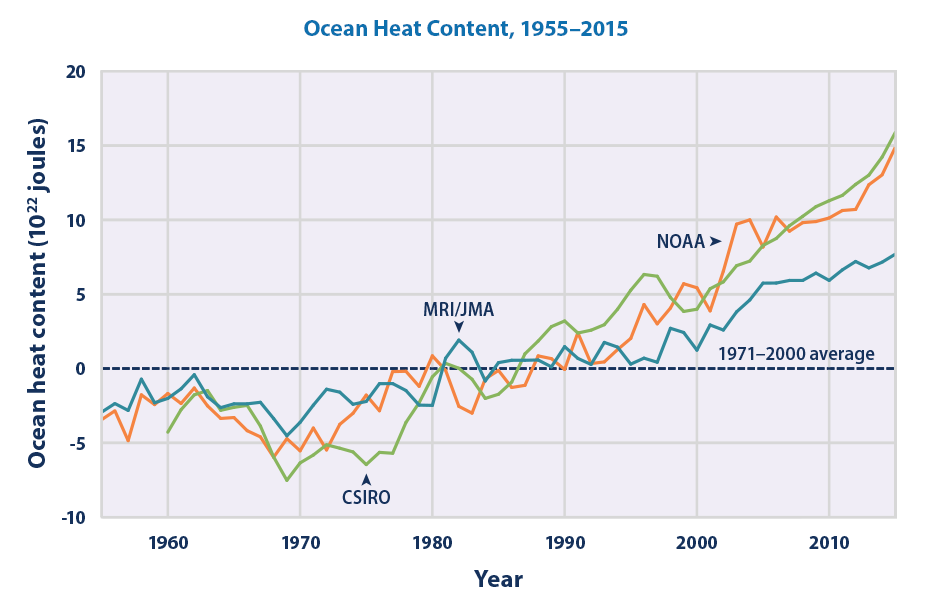 Now this presents a real problem for claims that ocean variability is the main driver. To see why, note that ocean dynamics changes only move energy around – to warm somewhere, they have to cool somewhere else. So posit an initial dynamic change of ocean circulation that warms the surface (and cools below or in other regions). To bring more energy into the system, that surface warming would have to cause the top-of-the-atmosphere radiation balance to change positively, but that would add to warming, amplifying the initial perturbation and leading to a runaway instability. There are really good reasons to think this is unphysical.

Remember too that ocean heat content increases were a predicted consequence of GHG-driven warming well before the ocean data was clear enough to demonstrate it.

Solar activity impacts on climate are a fascinating topic, and encompass direct radiative processes, indirect effects via atmospheric chemistry and (potentially) aerosol formation effects. Much work is being done on improving the realism of such effects – particularly through ozone chemistry (which enhances the signal), and aerosol pathways (which don’t appear to have much of a global effect i.e. Dunne et al. (2016)). However, attribution of post 1950 warming to solar activity is tricky (i.e. impossible), because solar activity has declined (slightly) over that time: 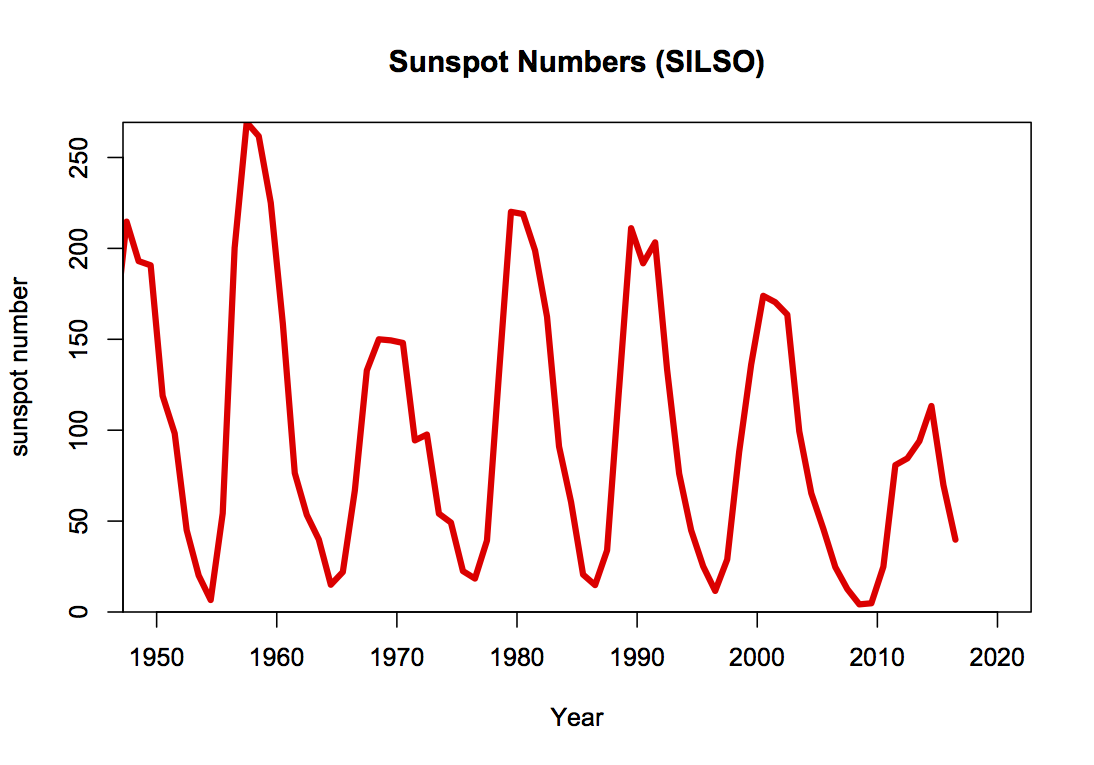 5) Aerosol forcings are indeed uncertain, but this does not impact the attribution of recent trends very much.

One of the trickier issues for fingerprint studies is distinguishing between the patterns from anthropogenic aerosols and greenhouse gases. While the hemispheric asymmetries are slightly larger for aerosols, the overall surface pattern is quite similar to that for greenhouse gases (albeit with a different sign). This is one of the reasons why the most confident statements in IPCC are made with respect to the “Anthropogenic” changes all together since that doesn’t require parsing out the (opposing) factors of GHGs and aerosols. Therefore in a fingerprint study that doesn’t distinguish between aerosols and GHGs, what the exact value of the aerosol forcing right is basically irrelevant. If any specific model is getting it badly wrong, that will simply manifest through a scaling factor very different from 1 without changing the total attribution.

What would it actually take to make a real argument?

As I’ve been asking for almost three years, it is way past time for Curry to shore up her claims in a quantitative way. I doubt that this is actually possible, but if one was to make the attempt these are the kind of things needed:

Absent any evidence to support these statements, the claim that somehow, somewhere the straightforward and predictive mainstream conclusions are fundamentally wrong just isn’t credible.