We have a minor tradition of doing a climate-related book review in the lead up to the holidays and this year shouldn’t be an exception. So here is a round-up of a number of new books that have crossed our desks, some of which might be interesting to readers here.

First off, Kerry Emanuel’s little primer “What we know about climate change” is a reprint of an essay he wrote for Boston Review earlier this year. I reviewed this for Nature Reports Climate Change already, so I won’t repeat myself here except to say that it is a good quick read from a reluctant convert. It might be particularly useful for a stubborn uncle at the holiday family gathering.

Gary Braasch is a photographer (and, full disclosure, someone I’m working with on another project), who has become one of the lead documenters of climate issues and whose images have appeared in National Geographic etc. He’s collected his photographs and travel notes into a new book ‘Earth under Fire – How global warming is changing the world‘. The book is very much a narrative of his personal journeys from the Antarctic Peninsula to Alaska and many points in between, documenting the changes he’s witnessed, the scientists he’s met and the people whose lives are already being affected. The science is descriptive rather than detailed (though there is plenty of interesting tidbits), but the real strength of the book is the imagery.

As Braasch points out in the introduction capturing, in a snapshot, climate changes that have been underway for decades is a challenge. Photos can have an iconic quality which, although they are not science themselves, can certainly illuminate that science. There is for instance a particular iconic series of retakes of old glacier photos showing the often dramatic changes over the decades. Many of these photos can be seen at his website, but they definitely come out better in the book. 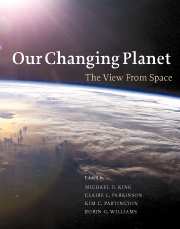 Another book with great pictures – more loosely focussed on all kinds of environmental change – is “Our Changing Planet – The View from Space“, a multi-author introduction to the spectacular vistas now available from remote sensing. These cover visible changes in deforestation, the drying up of Lake Chad, the melting of the Arctic sea ice, mostly seen from 800 km up – the height of the polar orbiting satellites. The text associated with each subject is terse but has enough information for readers to work out what is going on and how any particular technique works. Again, some of the pictures are stunning. (Note despite the similarity in titles, this has nothing to do with the annual reports of the USGCRP which are a much duller read!).

Other RC people have recommended Storm World by Chris Mooney on the sometimes fractious, but always interesting, world of hurricane/climate links, and Six Degrees, Mark Lynas’ step by step guide to what each additional degree of warming might bring.

“Thin Ice” by Mark Bowen gets a big thumbs up as well. It is more or less a biography of Lonnie Thompson but it is by no means limited to Thompson’s work. Much of the book focuses on various important figures in the history of the science of climate: Arrhenius, Tyndall, and Keeling among them. And while paleoclimatology takes the main stage, one could read this book alone for a very clear lay-persons understanding of the physics of the greenhouse effect, or for insight into the mind of the brilliant and provocative James Hansen, or the story or Roger Revelle and David Keeling’s measurements of carbon dioxide concentrations. It is notable that Bowen has a PhD from MIT, so is no newcomer to science.

And finally, something for the kids. But only if your children have been very, very bad should you consider giving them a copy of Holly Fretwell’s ‘The Sky’s not Falling’. This is possibly the worst book ever written about climate change for any audience, let alone one that is being thrust upon impressionable young minds. It is replete with incorrect ‘Fun Facts!’ and misleading propaganda. For instance, did you know that “the two largest ice sheets today, Antarctica and Greenland, flow over the ocean and are already below sea level. If they were to melt sea level would not rise very much.”? Or that “sea levels twenty thousand years ago were eighty-two feet lower”? Me neither (try 400ft).

Luckily though this book fails at all levels. It isn’t a good children’s book – it ranges from the patronising; “Now imagine a new gas tax” to the inappropriately obscure (cherry-picked journal citations in the text, appallingly captioned figures – how many 11 year olds know what Gross Primary Productivity means?) and it’s even worse at the science (the hockey stick came from a computer model, scientists have found a direct connection between cosmic rays and climate!) let alone economics (e.g. We are rich because we pollute, and therefore polluting more will make us richer! Tragedy of the commons anyone?). Fun Fact! Tim Ball and Marc Morano helped with fact-checking.

Update: I am reliably informed that there is probably something much better for kids on the horizon: “How We Know What We Know About Our Changing Climate: Scientists and Kids Explore Global Warming” by Lynne Cherry and Gary Braasch (again!).