You are here: Home / Climate Science / Storm World: A Review 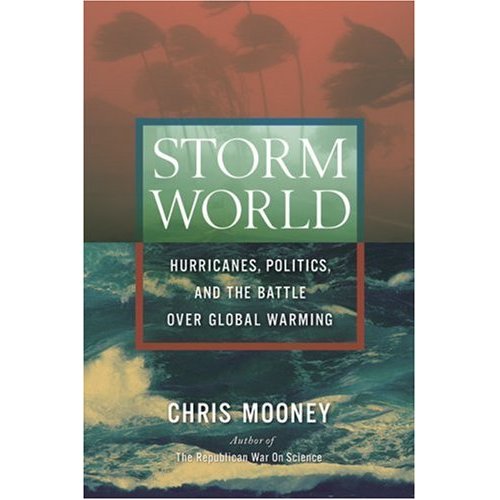 If you are a RealClimate regular, you are undoubtedly aware of our ongoing interest in the developments in the scientific understanding of potential hurricane-climate change linkages. This is an area of the science where a substantial body of significant new research has emerged even since RealClimate’s inception in late 2004. The scientific research in this area, and the media frenzy and political theatrics that have inescapably followed it, are thoughtfully placed in a broader historical context in a fascinating new book by Chris Mooney entitled Storm World: Hurricanes, Politics, and the Battle over Global Warming. Anyone who is at all interested in the scientific history that has led to our current understanding of Hurricanes and their potential linkages with climate change, will find this book a page turner. The book is a nice complement to Kerry Emanuel’s recent book Divine Wind: The History and Science of Hurricanes (which too is so readable that it lies on our coffee table). Mooney in a sense picks up where Emanuel’s left off. Like Emanuel, he explores the history of the science. But he uses this historical context, and his studies of the personalities of key actors, to explore how the current scientific debate can be traced back to a rift that has emerged over many decades between distinct communities of atmospheric scientists.

Those looking for a polemic (the title of Mooney’s previous book, after all, was “The Republican War on Science”) will be disapointed. Mooney has clearly matured as a writer, and this latest book constitutes his best effort to date. He delivers a thoughtful, non-partisan, and scientifically and historically accurate review of the emergent science exploring the potential influence of climate change on hurricanes.

If you’ve followed the scientific debate on global warming and hurricanes, you will recognize many of the characters in Mooney’s tale (yours truly even gets mentioned a few times :) ). You will also not be surprised to find that William Gray and Kerry Emanuel are the two most prominently featured scientists. In part of course, because they neatly symbolize the two opposing camps in the current debate: contrast for example Emanuel’s work demonstrating a linkage between increasing hurricane intensity and global warming with Gray’s denial of any such link. However, Mooney also traces their respective work back to two different historical schools of thought in the atmospheric science community. On one side are the data-driven empiricists, such as Redfield, Loomis,and Riehl and on the other side the theorists such as Espy, Ferrel and Charney. Gray naturally follows in the tradition of the first group (his Ph.D adviser was Riehl who is sometimes credited as the father of the field of tropical meteorology). Emanuel, a student of Charney, follows in the tradition of the great theorists in atmospheric science. Of course its not quite that simple (and Mooney acknowledges as much). Though Emanuel may perhaps be best known for his theoretical investigations of Hurricane potential intensity, he has also done considerable work analyzing observations. And while best known for his work deducing from observations the parameters governing hurricane genesis, Gray has nonetheless made forays into “theory” (though the results have been decidedly mixed). But the historical context that Mooney provides gives quite a bit of insight into the divergent views that have arisen among partisans in the current hurricane-climate debate.

Mooney covers many of the themes and issues we’ve discussed here before, but adds his own novel interpretations and uncovers a number of key historical details, in the process of stitching together a compelling narrative. Naturally, there is discussion of the hoopla over the active 2004 and 2005 Atlantic hurricane seasons and the aftermath of Katrina. There is extensive discussion of the high-profile studies by Emanuel, Webster, Curry and coworkers (see e.g. here and here) which, eerily coincident with the record-setting 2005 season, first suggested a detectable climate change signal in hurricane behavior. Due attention, in turn, is payed to the active scientific debate these studies have subsequently generated. Mooney describes the debate over the role of natural vs. anthropogenic factors in observed tropical warming trends that have been related to increased hurricane activity, and there is a fair amount of discussion of the partisanship that high-level NOAA administrators have apparently taken in this debate. But, you might ask, what is the bottom line taken by Mooney? What side of the debate does he come down on? Well, again, those looking for a fight will again be disappointed.

Mooney doesn’t come down on any particular ‘side’ of the debate. Instead, he explores the nuances of the scientific findings and views of the various protagonists, and helps the science and the scientists speak for themselves. For example, he gives Bill Gray credit (and rightly so) for the important contributions he has made to our current understanding of hurricane genesis, and shows a somewhat bemused admiration for Gray as a sympathetic relic of a dying breed of atmospheric scientist. But this does not stand in the way of him criticizing Gray (again rightly so) for his curmudgeonly scorn of current generation scientists, and in particular his somewhat irrational rejection of the science supporting an anthropogenic influence on climate. Mooney articulates his criticism gently, by citing Arthur C. Clarke’s “First Law”

There should be no misunderstanding. While Mooney is indeed balanced, he is not completely agnostic either. He recognizes that hurricane characteristics are indeed changing and that, while we may not yet have arrived at definitive answers to the underlying scientific questions, we ought to be concerned.

One could quibble with some details of the book. As we have remarked before, one should be very careful about giving too much weight to any one late-breaking paper. Where there are certainly exceptions where paradigms are dramatically broken on the strength of one groundbreaking paper, science rarely works that way. Instead, scientific understanding generally advances slowly and steadily, based on the results of many independent studies. Mooney however gives quite a bit of weight to the recent article by Kossin et al just published as the book was completed. While this study is undoubtedly an important contribution to the literature, introducing a potentially useful methodology for refining estimates of past tropical cyclone activity in all the major basins, it is hardly the last word (see e.g. the discussion thread in our previous article on the paper). And in places, the implications of that paper are overplayed. For example, Mooney appears in places to imply that the paper’s findings challenge the contention that climate change can be tied to increasing hurricane intensity. While the Kossin et al results do challenge some of the findings described in the work by Webster et al (2005) (i.e., the trends for the Pacific and Indian basins), they reinforce the conclusion of positive intensity trends for the Atlantic. Perhaps more importantly, the paper in no way challenges the Emanuel (2005) study demonstrating a close linkage between warming sea surface temperatures and hurricane intensity for the Atlantic. Indeed, those latter findings have been reinforced, not challenged, by more recent work (e.g. Sriver and Huber).

These are minor quibbles however. Mooney chose to walk a minefield in attempting to assess a controversial and quickly evolving field in climate research. He not only succeeded in producing a fair and accurate description of the science, but provides us a fascinating read as well. There is a good chance the book will achieve a very wide readership. If so, then Mooney has performed a real service by helping communicate a subtle but important topic within the scientific discourse to the person on the street.

Note: Chris Mooney has provided us with an early copy of Storm World and we’re reviewing it before the official publication date–July 9–so you can’t get the book yet in stores. However, you can order it on Amazon.com. You can also visit the book website for more information (including an excerpt of the first chapter).

157 Responses to "Storm World: A Review"