You are here: Home / Climate Science / Aerosols / Still not convincing 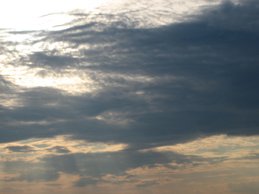 The hypothesis is this: a rapid reduction in GCR, due to FD, results in reduced ionization of the atmosphere, and hence less cloud drops and liquid water in low clouds. Their analysis of various remote sensing products suggest that the opacitiy (measured in terms of the Angstrom exponent) due to aerosols reaches a minimum ~5 days after FD, and that there is a minimum in the cloud liquid water content (CWC) occurring ~7 days later than the FD. They also observe that the CWC minimum takes place ~4 days after the fine aerosol minimum (the numbers here don’t seem to add up).

The paper is based on a small selection of events and specific choice of events and bandwidths. The paper doesn’t provide any proof that GCR affect the low clouds– at best -, but can at most only give support to this hypothesis. There are still a lot of hurdles that remain before one can call it a proof.

One requirement for successful scientific progress in general, is that new explanations or proposed mechanisms must fit within the big picture, as well as being consistent with other observations. They must also be able to explain other relevant aspects. A thorough understanding of the broader subject is therefore often necessary to put the new pieces in the larger context. It’s typical of non-experts not to place their ideas in the context of the bigger picture.

If we look at the big picture, one immediate question is why it should take days for the alleged minimum in CWC to be visible? The lifetime of clouds is usually thought to be on the order of hours, and it is likely that most of the CWC has precipitated out or re-evaporated within a day after the cloud has formed.

In this context, the FD is supposed to suppress the formation of new cloud condensation nuclei (CCN), and the time lag of the response must reflect the life time of the clouds and the time it takes for new ultra-fine molecule clusters (tiny aerosols) to grow to CCN.

Next question is then, why the process, through which ultra-fine molecule clusters grow by an order of ~1000 to become CCN, takes place over several days while the clouds themselves have a shorter life time?

There is also a recent study in GRL (also a comment on May 1st, 2009 in Science) by Pierce and Adams on modeling CCN, which is directly relevant to Svensmark et al.‘s hypothesis, but not cited in their paper.

Pierce and Adams argue that the theory is not able to explain the growth from tiny molecule clusters to CCN. Thus, the work by Svensmark et al. is not very convincing if they do not discuss these issues, on which their hypothesis hinges, even if the paper by Pierce and Adams was too recent for being included in this paper.

But Svensmark et al. also fail to make reference to another relevant paper by Erlykin et al. (published January 2009), which argues that any effect on climate is more likely to be directly from solar activity rather than GCR, because the variations in GCR lag variations in temperature.

Furthermore, there are two recent papers in the Philosophical Transactions A of the Royal Society, ‘Enhancement of cloud formation by droplet charging‘ and ‘Discrimination between cosmic ray and solar irradiance effects on clouds, and evidence for geophysical modulation of cloud thickness‘, that are relevant for this study. Both support the notion that GCR may affect the cloudiness, but in different aspects to the way Svensmark et al. propose. The first of these studies focuses on time scales on the order of minutes and hours, rather than days. It is difficult to explain how the changes in the current densities taking place minutes to hours after solar storms may have a lasting effect of 4-9 days.

There are many micro-physical processes known to be involved in the low clouds, each affecting the cloud droplet spectra, CWC and the cloud life times. Such processes include collision & coalescence, mixing processes, winds, phase changes, heat transfer (e.g., diffusive and radiative), chemical reactions, precipitation, and effects from temperature. The ambient temperature determines the balance between the amount of liquid water and that of water vapour.

On a more technical side, the paper did not communicate well why 340 nm and 440 nm should the magic numbers for the remote sensing data and the Angstrom exponents, calculated from the Aerosol Robotic Network (AERONET). There are also measurements for other wavelengths, and Svensmark et al. do not explain why these particular choices are best for the type of aerosols they want to study.

For a real effect, one would expect to see a response in the whole chain of the CCN-formation, from the smallest to the largest aerosols. So, what about the particles of other sizes (or different Angstrom exponents) than those Svensmark et al. have examined? Are they affected in the same way, or is there a reason to believe that the particles grow in jumps and spurts?

If one looks long enough at a large set of data, it is often possible to discern patterns just by chance. For instance, ancient scholars thought they found meaningful patterns in the constellations of the stars on the sky. Svensmark et al. selected a smaller number of FDs than Kristjansson et al. (published in 2008) who found no clear effect of GCR on cloudiness.

Also, statistics based on only 26 data points or only 5 events as presented in the paper is bound to involve a great deal of uncertainty, especially in a noisy environment such as the atmosphere. It is important to ask: Could the similarities arise from pure coincidence?

Applying filtering to the data can sometimes bias the results. Svensmark et al. applied a Gaussian smooth with a width of 2 days and max 10 days to reduce fluctuations. But did it reduce the ‘right’ fluctuations? If the aerosols need days to form CCNs and hence clouds, wouldn’t there be an inherent time scale of several days? And is this accounted for in the Monte-Carlo simulations they carried out to investigate the confidence limits? By limiting the minimum to take place in the interval 0-20 days after FD, and defining the base reference to 15 to 5 days before FD, a lot is already given. How sensitive are the results to these choices? The paper does not explore this.

For a claimed ‘FD strength of 100 %’ (whatever that means) the change in cloud fraction was found to be on the order 4% +-2% which, they argue, is ‘slightly larger than the changes observed during a solar cycle’ of ~2%. This is not a very precise statement. And when the FD only is given in percentage, it’s difficult to check the consistency of the numbers. E.g. is there any consistency between the changes in the level of GCR between solar min and max and cloud fraction and during FD? And how does cloud fraction relate with CWC?

Svensmark et al. used the south pole neutron monitor to define the FD, with a cut-off rigidity at 0.06GV that also is sensitive to the low-energy particles from space. Higher energies are necessary for GCR to reach the lower latitudes on Earth, and the flux tends to diminish with higher energy. Hence, the south pole monitor is not necessarily a good indicator for higher-energy GCR that potentially may influence stratiform clouds in the low latitudes.

Svensmark et al. claim that the results are statistically significant at the 5%-level, but for the quantitative comparison (their 2nd figure) of effect of the FD magnitude in each of the four data sets studied, it is clear that there is a strong scatter and that the data points do not lie neatly on a line. Thus, it looks as if the statistical test was biased, because the fit is not very impressive.

The GRL paper claims to focus on maritime clouds, but it is reasonable to question if this is true as the air moves some distance in 4-9 days (the time between the FD and the minimum in CWC) due to the winds. This may suggest that the initial ionization probably takes place over other regions than where the CWC minima are located 4—9 days afterward. It would be more convincing if the study accounted for the geographical patterns and the advection by the winds.

The paper does not discuss the lack of trend in the GCR of moderate energy levels or which role GCR plays for climate change. They have done that before (see previous posts here, here, and here), and it’s wise to leave out statements which do not have scientific support. But it seems they look for ways to back up their older claim, and news report and the press release on their paper make the outrageous claim that GCR have been demonstrated to play an important role in recent global warming.

A recent analysis carried out by myself and Gavin, and published in JGR, compares the response to solar forcing between the GISS GCM (ER) and the observations. Our analysis suggests that the GCM provides a realistic response in terms of the global mean temperature – well within the bounds of uncertainty, as uncertainties are large when applying linear methods to analyse chaotic systems. The model does not include the GCR mechanism, and the general agreement between model and observations therefore is consistent with the effect of GCR on clouds being minor in terms of global warming.

As an aside to this issue, there has been some new developements regarding GCR, galaxy dynamics and our climate (see the commentary environmentalresearchweb.org) – discussed previously here.

409 Responses to "Still not convincing"