You are here: Home / Climate Science / Why the continued interest?

My impression from the solicited talk, is that the confidence in the GCR hypothesis now rests on two points that were made explicit in the presentation, and that we have not adequately addressed here. So, here they are:

Point I: When I asked Svensmark why he presented a curve describing low cloud-cover from the ISCCP – used for correlation study with GCR (link) – that differed from the curves presented at the ISCCP web site (link), he informed me that he used a corrected version that has been published. Nevertheless, the ‘correction’ of the curve is controversial, and the ISCCP team is clearly not convinced, despite the likelihood of instrumental degradation.

Good practice would then be to present all the curves that cannot be ruled out because of errors. When asked why he didn’t present the other cures too, he said that he only wanted to show the one curve. Not a very convincing answer, and not very reassuring.

Point II involves a ‘remarkable’ correlation, meant to demonstrate a link between high GCR flux and cold conditions. This analysis is based on a comparison between band-pass filtered ice-rafted debris from iceberg drifts (Bond, 2001) and Carbon-14 (a cosmogenic isotope) over the last 12,000 years (e.g. after the most recent ice age).

The relationship between temperature and drifting icebergs, however, is complicated and not so straight forward. Icebergs are formed when chunks of ice break off glaciers and icesheets – a process known as ‘calving’.

On the one hand, icesheets and glaciers grow when the accumulation of precipitation at below freezing temperatures (snow) exceeds the summertime melting. Very low temperatures, tend to be associated with low precipitation, however. One the other hand, iceberg calving does not require very low temperatures (as long as the ice is present), but is favoured by reduced friction at the base of ice caps, resulting in a faster flow towards the sea. Melt water can lubricate the ice sheets and hence affect the ice flow.

Once the icesheets have calved and produced icebergs, they will drift according to the winds and ocean currents. The most influential ocean currents for iceberg drift in the North Atlantic include the East Greenland Current EGC), which follows the east coast of Greenland and flows from northeast to southwest, the West Greenland current (WGC) into the Labrador Sea, and the Labrador current (LC), a coastal current following along the perimeter of the Labrador sea basin in an anti-clockwise fashion. 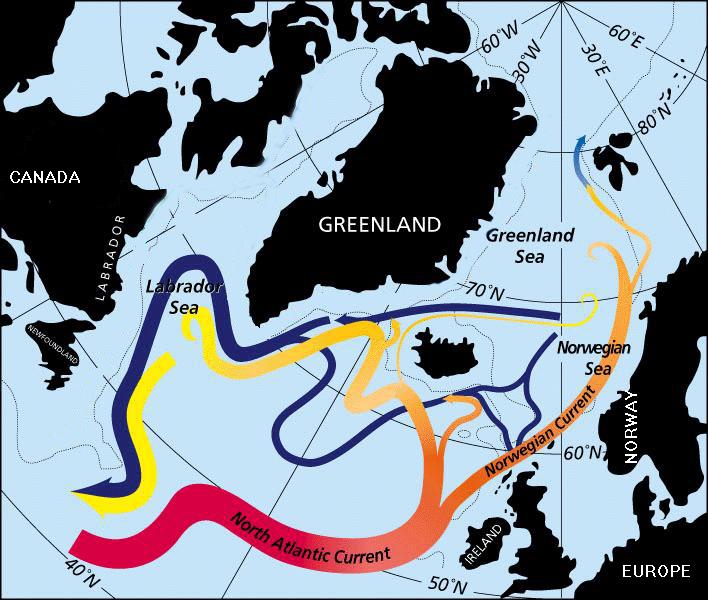 Many of the cores used to study the ice-rafted debris were from locations away from these currents. It is not clear whether anomalous cold conditions produced more southerly winds and ocean currents. However, many of the core locations are associated with a surface flow from the south in the present climate, so it is possible that the icebergs transported by the EGC, WGC, and LC end up in the North Atlantic current. One explanation is that the icebergs got caught in the warm currents from the south, and melted on their way north, but that does not necessary imply cold conditions in that region, as these warm ocean currents provide a heat transport and the melting of icebergs suggest higher temperatures.

Cold conditions favour the formation of sea-ice, which have very different characteristics to icebergs. Sea-ice forms when the sea surface freezes, and can affect the ocean circulation through their effect on salinity. However, sea-ice does not create debris of rocks and minerals, as the icebergs do when the bottom of the sliding icesheets scrape the rocks.

It is plausible that very cold conditions can produce thick sea-ice that will lock icebergs in place near their sources in the Labrador sea and along the east coast of Greenland, but seasonal variations in the sea-ice may also imply open water in the summer. Nevertheless, very cold conditions may not necessarily favour the production of icebergs, as freezing temperatures will prevent the formation of melt water acting as lubrication and the accumulation of ice is expected to be less due to lower precipitation.

In summary, the ‘remarkable’ correlation does not seem to support the hypothesis that high flux of GCR produces a very cold climate. The question is rather whether the ocean and atmospheric circulation were influenced by the level of solar activity and associated changes in the total solar irradiation (TSI) – without involving GCR. After all, GCR is affected by the level of solar activity through its influence of the inter-planetary magnetic field, and anti-correlated with the sunspots.

When taken in the context of the global warming, there are other problematic issues such as the lack of trend in GCR (here and here), stronger warming during nighttime than daytime, large unknowns regarding the physical mechanisms involved in the growth of ultra-small molecule clusters to much larger cloud condensation nuclei (here and here), and questionable data handling and statistical analysis (here). In addition, it is difficult to statistically distinguish between the apparent response to solar forcing in the observations and GCM which do not take GCRs into account (link to a recent paper by Gavin and myself), implying that GCRs are not needed to explain past global temperature trends.

So what makes the GCR-hypothesis so convincing that warrants a solicited talk at the EMS annual meeting and an invited presentation at the NASL? Is the support based on the attention in media, or does it have a scientific basis?

I want a response from the community still supporting the GCR hypothesis, explaining why they find it convincing after all these misgivings. The spirit of science is about discussing different ideas and challenge unconvincing points of view. So far, I feel that many of these issues have gone unheeded outside the climate research community. Perhaps an improved dialogue between various research communities can help resolving these issues – the counter-arguments and GCR hypothesis represent a paradox that should be sorted out if the science is to progress. Either the supporters of the GCR hypothesis should convincingly explain why these misgivings are unfounded or irrelevant, or the GCR hypothesis should be buried. However, I feel that there is a lack of dialogue and willingness to listen, so I think that progress is not likely to happen regarding a commonly accepted solution on the GCR hypothesis.

Update: According to a recent (October 16) news relsease from the International Ice Charting Working Group (IICWG), over 1,200 icebergs drifted into the trans-Atlantic shipping lanes in 2009, making the iceberg season in the North Atlantic the eleventh most severe since the tragic loss of the RMS Titanic in 1912.

P.S. So far in 2009, three articles have been published in the arXhive on GCR and clouds (here, here, here). It is possible that such articles are more accessible to communities other than climate research, and hence enhances the awareness about the controversy surrounding the GCR-hypothesis.

506 Responses to "Why the continued interest?"