You are here: Home / Climate Science / Revisiting the Younger Dryas

One of the most intriguing and well-studied climatic events in the past is the Younger Dryas (YD), a rather abrupt climate change between ~12.9 and 11.6 thousand years ago. As the world was slowly warming and ice was retreating from the last glaciation, the YD effectively halted the transition to today’s relatively warm, interglacial conditions in many parts of the world. This event is associated with cold and dry conditions increasing with latitude in the North, temperature and precipitation influences on tropical and boreal wetlands, Siberian-like winters in much of the North Atlantic, weakening of monsoon intensity, and southward displacement of tropical rainfall patterns. RealClimate has previously discussed the YD (here and here) however there have been a number of developments in recent years which deserve further attention, particularly with respect to the spatial characteristics and causes of the YD.

The YD is often discussed in the same context as the ‘Dansgaard-Oeschger’ events seen in the ice cores during full glacial conditions, and the ‘Heinrich events’ of layers of ice-rafted debris in North Atlantic ocean sediments. Indeed, some people occasionally refer to the YD as Heinrich event 0, but this implies that the YD cooling was caused by an ice-rafting event (probably untrue) and should be avoided.  The YD occurred last of several prominent and abrupt deglacial events including Heinrich Event 1 (~17.5 to 16 ka) which is an event contained within the Older Dryas (18 to 14.7 ka), followed by the Bølling-Allerød warm period (~14.7 to 12.9 ka) whose end then marks the start of the YD. The end of the YD can be said to be the start of the Holocene. It has been proposed that the warmings before and after the YD can be viewed as Dansgaard-Oeschger events with the YD just a regular cold (i.e. stadial) phase in between (Rahmstorf 2002, 2003). In Antarctica (~15 to 13 ka), the most featured event is that as the Younger Dryas begins, warming is occurring in Antarctica.  The cold period in Antarctica that precedes the Younger Dryas is referred to as the Antarctic Cold Reversal (ACR) (see figure, from Shakun and Carlson, 2010) and was once thought to be in phase with the YD.  They are neither directly in phase nor anti-phased with one another (see e.g. Steig and Alley, 2002). 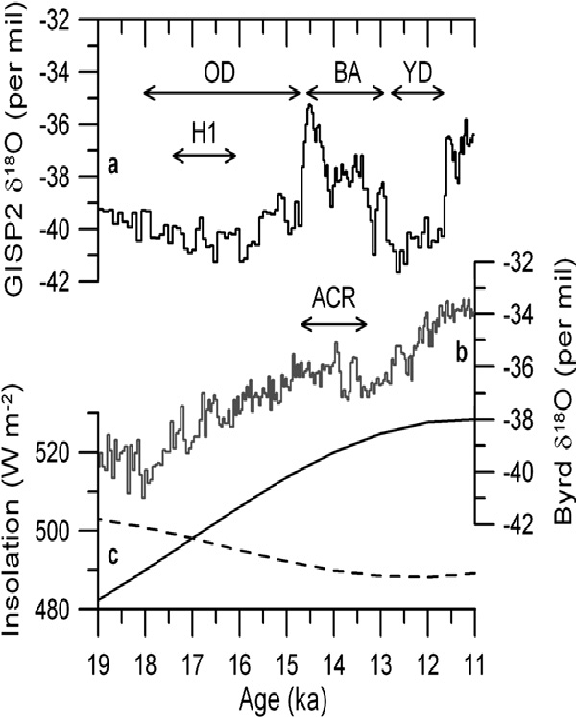 Unlike changes in global temperature (such as modern day global warming) which can be understood as a result of perturbations to the planetary energy balance, the millennial-scale climate changes during the last glaciation are viewed primarily from the lens of internal dynamics, including ice retreat and re-organizations of ocean circulation. They are not dominated by changes in global mean temperature but rather changes in temperature distribution, explained by changes in oceanic or atmospheric heat transport. In particular, proxies of deepwater formation show large reductions in the Atlantic meridional overturning circulation (AMOC) coincident with the start of the YD. This suggested weakening of overturning circulation provides immense explanatory power for the onset of the YD although no consensus has emerged concerning the trigger of the AMOC reduction. There are some radiative changes associated with millennial-scale climate change induced by the ice-albedo effect, extra dust loading out of Asia during cold snaps, as well as greenhouse gas feedbacks– although they are relatively small. However, pinning down the exact sequence of causes and effects is rather difficult since precise chronologies and global-scale reconstructions are difficult to come by prior to the Holocene.

A new study though (Shakun and Carlson, 2010) has compiled over 100 high-resolution proxy records to characterize the timing and extent of the Last Glacial Maximum (LGM) and the deglacial evolution into the Holocene, including the shorter-lived Younger Dryas. Several of the key features of the study include:

The see-saw effect during millennial-scale climate changes has been confirmed before (also discussed at RealClimate in the context of the somewhat similar Dansgaard-Oeshger events) and is consistent with modeling efforts of the climate evolution during the last deglaciation, including Liu et al., 2009 (discussed here) who show that current state-of-the-art models can simulate the magnitude of abrupt climate changes well.

So what caused the reduction in the AMOC?

The most prevalent concept for slowing AMOC involves a reduction in the surface water density at the ocean surface via adding freshwater into the ocean. The preferred location is primarily the North Atlantic, which is a key point for deep ocean convection. The original idea for this to cause a YD-event was proposed in 1976 by Johnson and McClure, and involved the opening of eastern Lake Agassiz outlet via northward retreat of the Laurentide Ice Sheet out of Lake Superior. This re-routed drainage from the Mississippi to the St. Lawrence River.

There is a difference between the diversion of continental runoff from the Mississippi River (routing) and the relatively fast pro-glacial lake drainage to a new level (flooding). In contrast to the Johnson and McClure paper, many recent studies have focused on short-lived floods, although the re-routing mechanism might be a necessary, and in fact primary ingredient (Carlson et al., 2007; Carlson and Clark, 2008) in accord with modeling studies which require a persistent forcing to substantially alter AMOC (Meissner and Clark, 2006).

Evidence of a specific flood water pathway at the right time has proven to be elusive. No clear evidence exists for a flood event into the Atlantic, though evidence discussed by Murton et al. (2010) for an Arctic pathway has recently emerged.

There has also been interest in the prospect of a comet impact during the YD triggering a flood (e.g., Firestone et al., 2007 discussed previously at RC) although subsequent work has suggested that their results are not robust (Surovell et al., 2009), and it is likely that the impacts a comet would have on atmospheric chemistry, particularly the formation of nitrate and ammonium, is inconsistent with observations in ice core records (Melott et al., 2010). Further, the problem with a comet impact still remains — how could it generate a continuous freshwater forcing? Because of dicey evidence and no predictive ability, the comet hypothesis has not gained much favour.

Recently another hypothesis has been put forward: The Younger Dryas, instead of being a freak occurrence, is instead a key (and normal) part of the deglaciation process. This was most clearly expressed in a new paper by Broecker et al (2010) ( including George Denton and Richard Alley). Their main point is that a catastrophic flood or comet would only serve as a trigger for an event that was already primed to happen. Evidence for this comes primarily for the existence of YD-like events during previous deglaciations, notably from Chinese stalagmite data (Cheng et al., 2009) who looked at monsoon patterns in the past. In particular, a YD-like event shows up during Termination III (~ 245 ka) and possibly Termination IV, which share similar characteristics to the YD. The finding of many events with characteristics like the YD further provides evidence against the necessity of comet-impact hypothesis. However, this concept doesn’t negate the need to understand the mechanisms for the YD or its potential predecessors. Whether it was primed to happen or not, what actually happened and how is still of great interest.

Broecker et al (2010) cite Lowell et al (2005) and Fisher et al (2008) to justify their reason for why the flood hypothesis is unappealing, but further work done by Carlson et al. (2007), Carlson and Clark (2008), and Carlson et al. (2009) provides newer support for the re-routing hypothesis. Furthermore, while Broecker et al. emphasize the lack of evidence for a catastrophic event, if the slower re-routing hypothesis is correct, then the lack of evidence for a sudden flood is irrelevant. This may very well be the mechanism that is common to previous deglacial events.

As a conclusion, over the last couple of years, there has now been growing evidence that an event similar to the YD is not “unique” but instead is a common theme across various deglacial events; this provides evidence against the necessity for a “catastrophic trigger,” and while it may be the case that a comet or some other catastrophe occurs at each termination, that seems improbable.

92 Responses to "Revisiting the Younger Dryas"