This is just a brief note to point out that a few graphs that I have put together showing Ocean Heat Content changes in recent decades had an incorrect scaling for the GISS model data. My error was in assuming that the model output (which were in units W yr/m2) were scaled for the ocean area only, when in fact they were scaled for the entire global surface area (see fig. 2 in Hansen et al, 2005). Therefore, in converting to units of 1022 Joules for the absolute ocean heat content change, I had used a factor of 1.1 (0.7 x 5.1 x 365 x 3600 x 24 x 10-8), instead of the correct value of 1.61 (5.1 x 365 x 3600 x 24 x 10-8). This problem came to light while we were redoing this analysis for the CMIP5 models and from conversations with dana1981 at skepticalscience.com.

These graphs appeared in Dec 2009, May 2010, Jan 2011 and Feb 2012. In each case, I have replaced the graph with a corrected version while leaving a link to the incorrect version. Links to the figures will return the corrected image (and this is noted on the image itself). Where possible I used the data that were current at the time of the original post. Fortunately this only affects the figures used in these blog postings and not in any publications. Apologies for any confusion.

This figure shows the comparison using the most up-to-date observational products (NODC, PMEL): 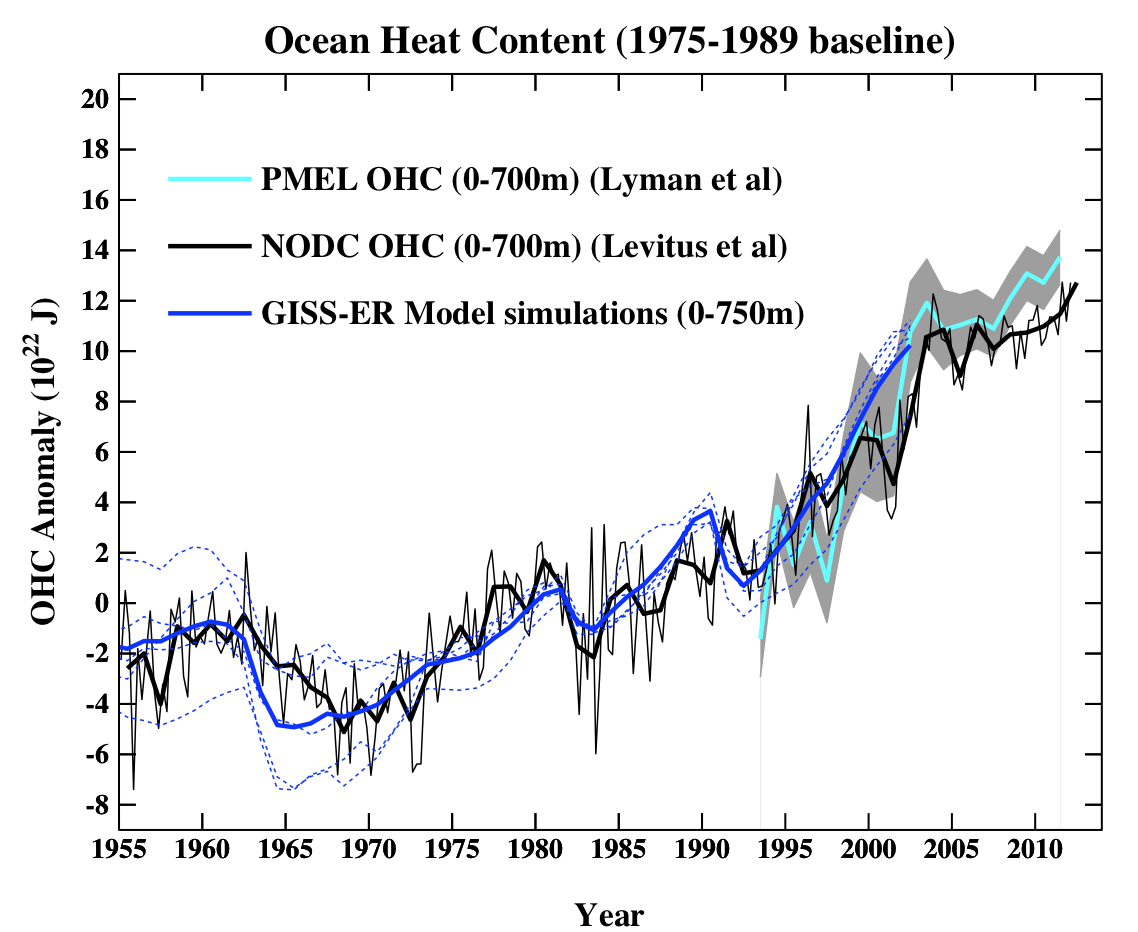 The basic picture is unchanged – model simulations were able to capture the historical variance in OHC (as best we know it now – there remains significant structural uncertainty in those estimates). There are clear dips related volcanic eruptions (Agung, El Chichon, Pinatubo), and an sharp increase in the 1990s. Note that in GISS-EH (same AGCM but with a different ocean model) OHC increases at a slightly slower rate than seen with GISS-ER above. Looking at the last decade, it is clear that the observed rate of change of upper ocean heat content is a little slower than previously (and below linear extrapolations of the pre-2003 model output), and it remains unclear to what extent that is related to a reduction in net radiative forcing growth (due to the solar cycle, or perhaps larger than expected aerosol forcing growth), or internal variability, model errors, or data processing – arguments have been made for all four, singly and together.

Analyses of the CMIP5 models will provide some insight here since the historical simulations have been extended to 2012 (including the last solar minimum), and have updated aerosol emissions. Watch this space.