And so it goes – another year, another annual data point. As has become a habit (2009, 2010), here is a brief overview and update of some of the most relevant model/data comparisons. We include the standard comparisons of surface temperatures, sea ice and ocean heat content to the AR4 and 1988 Hansen et al simulations.

First, a graph showing the annual mean anomalies from the IPCC AR4 models plotted against the surface temperature records from the HadCRUT3v, NCDC and GISTEMP products (it really doesn’t matter which). Everything has been baselined to 1980-1999 (as in the 2007 IPCC report) and the envelope in grey encloses 95% of the model runs. 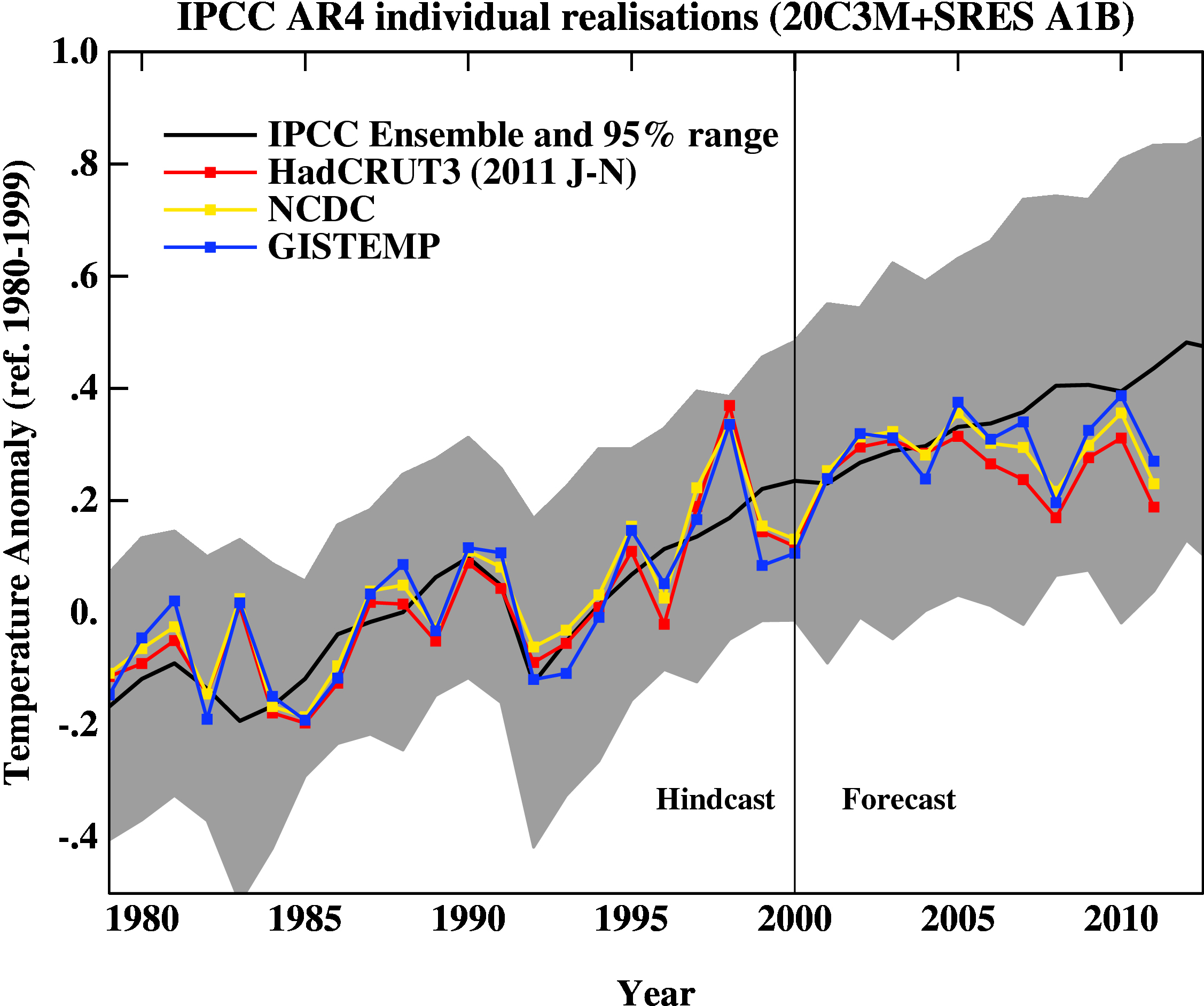 The La Niña event that emerged in 2011 definitely cooled the year a global sense relative to 2010, although there were extensive regional warm extremes. Differences between the observational records are mostly related to interpolations in the Arctic (but we will check back once the new HadCRUT4 data are released). Checking up on our predictions from last year, I forecast that 2011 would be cooler than 2010 (because of the emerging La Niña), but would still rank in the top 10. This was true looking at GISTEMP (2011 was #9), but not quite in HadCRUT3v (#12) or NCDC (#11). However, this was the warmest year that started off (DJF) with a La Niña (previous La Niña years by this index were 2008, 2001, 2000 and 1999 using a 5 month minimum for a specific event) in the GISTEMP record, and the second warmest (after 2001) in the HadCRUT3v and NCDC indices. Given current indications of only mild La Niña conditions, 2012 will likely be a warmer year than 2011, so again another top 10 year, but not a record breaker – that will have to wait until the next El Niño.

People sometimes claim that “no models” can match the short term trends seen in the data. This is not true. For instance, the range of trends in the models for 1998-2011 are [-0.07,0.49] ºC/dec, with MRI-CGCM (run5) the laggard in the pack, running colder than observations.

In interpreting this information, please note the following (repeated from previous years):

Foster and Rahmstorf (2011) showed nicely that if you account for some of the obvious factors affecting the global mean temperature (such as El Niños/La Niñas, volcanoes etc.) there is a strong and continuing trend upwards. An update to that analysis using the latest data is available here – and shows the same continuing trend:

There will soon be a few variations on these results. Notably, we are still awaiting the update of the HadCRUT (HadCRUT4) product to incorporate the new HadSST3 dataset and the upcoming CRUTEM4 data which incorporates more high latitude data (Jones et al, 2012). These two changes will impact the 1940s-1950s temperatures, the earliest parts of the record, the last decade, and will likely affect the annual rankings (and yes, I know that this is not particularly significant, but people seem to care).

Figure 2 is the comparison of the ocean heat content (OHC) changes in the models compared to the latest data from NODC. As before, I don’t have the post-2003 AR4 model output, so I have extrapolated the ensemble mean to 2012 (understanding that this is not ideal). New this year, are the OHC changes down to 2000m, as well as the usual top-700m record, which NODC has started to produce. For better comparisons, I have plotted the ocean model results from 0-750m and for the whole ocean. All curves are baselined to the period 1975-1989.

I’ve left off the data from the Lyman et al (2010) paper for clarity, but note that there is some structural uncertainty in the OHC observations. Similarly, different models have different changes, and the other GISS model from AR4 (GISS-EH) had slightly less heat uptake than the model shown here. 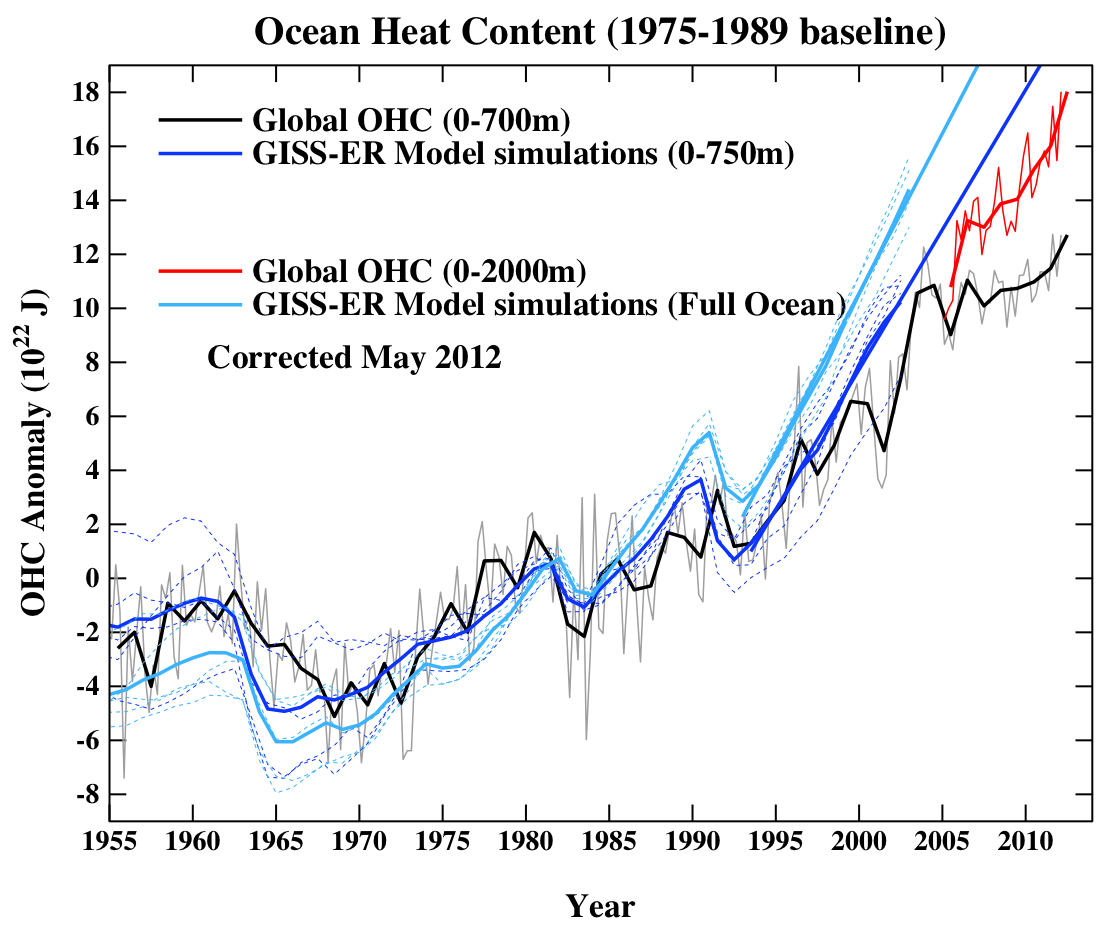 Update (May 2012): The figure has been corrected for an error in the model data scaling. The original image can still be seen here.

As can be seen the long term trends in the models match those in the data, but the short-term fluctuations are both noisy and imprecise [Update: with the correction in the graph, this is less accurate a description. The extrapolations of the ensemble give OHC changes to 2011 that range from slightly greater than the observations, to quite a bit larger]. As an aside, there are a number of comparisons floating around using only the post 2003 data to compare to the models. These are often baselined in such a way as to exaggerate the model data discrepancy (basically by picking a near-maximum and then drawing the linear trend in the models from that peak). This falls into the common trap of assuming that short term trends are predictive of long-term trends – they just aren’t (There is a nice explanation of the error here).

Sea ice changes this year were dramatic, with the Arctic September minimum reaching record (or near record) values (depending on the data product). Updating the Stroeve et al, 2007 analysis (courtesy of Marika Holland) using the NSIDC data we can see that the Arctic continues to melt faster than any of the AR4/CMIP3 models predicted. 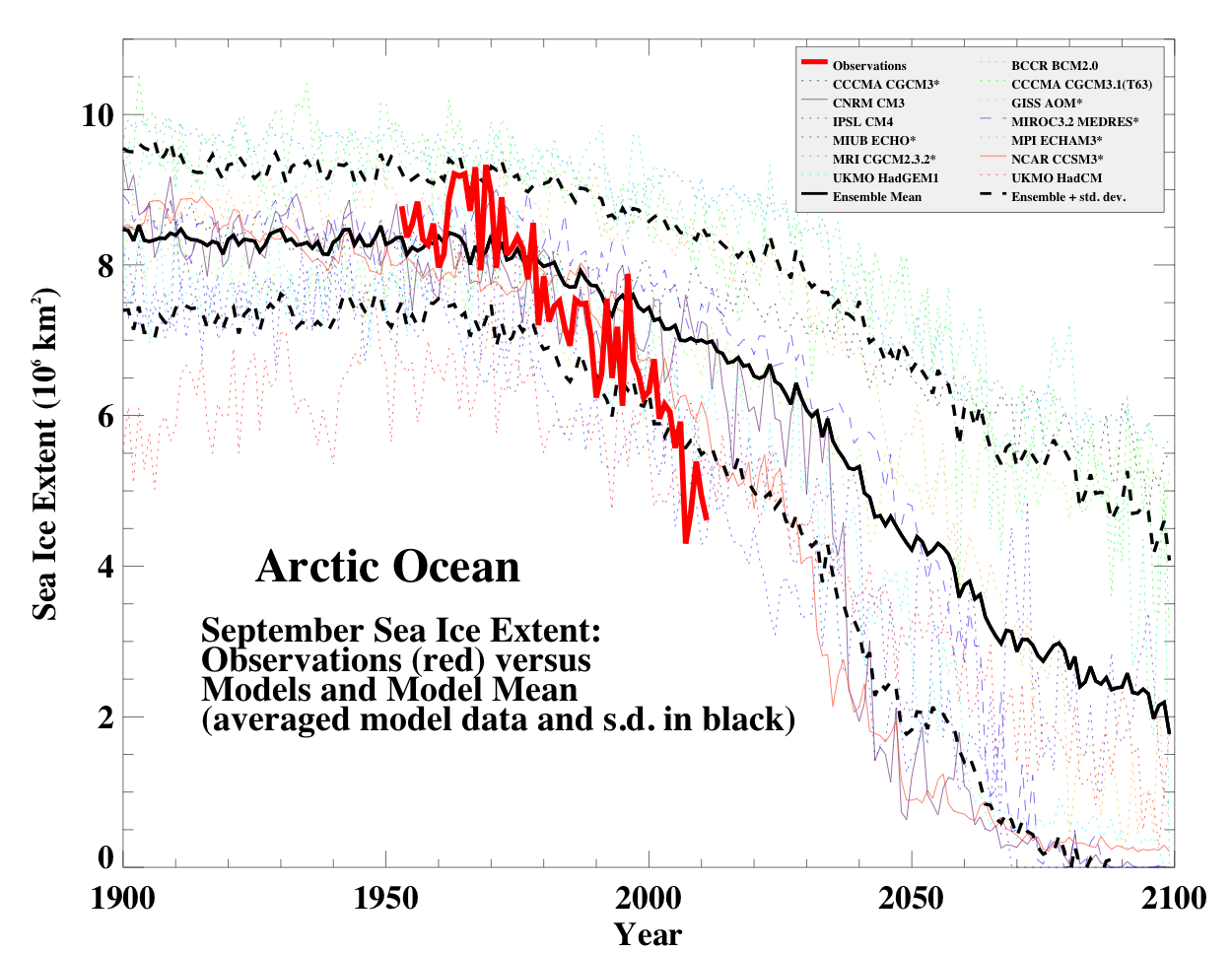 This may not be true for the CMIP5 simulations – but we’ll have a specific post on that another time.

Finally, we update the Hansen et al (1988) comparisons. Note that the old GISS model had a climate sensitivity that was a little higher (4.2ºC for a doubling of CO2) than the best estimate (~3ºC) and as stated in previous years, the actual forcings that occurred are not exactly the same as the different scenarios used. We noted in 2007, that Scenario B was running a little high compared with the forcings growth (by about 10%) using estimated forcings up to 2003 (Scenario A was significantly higher, and Scenario C was lower). 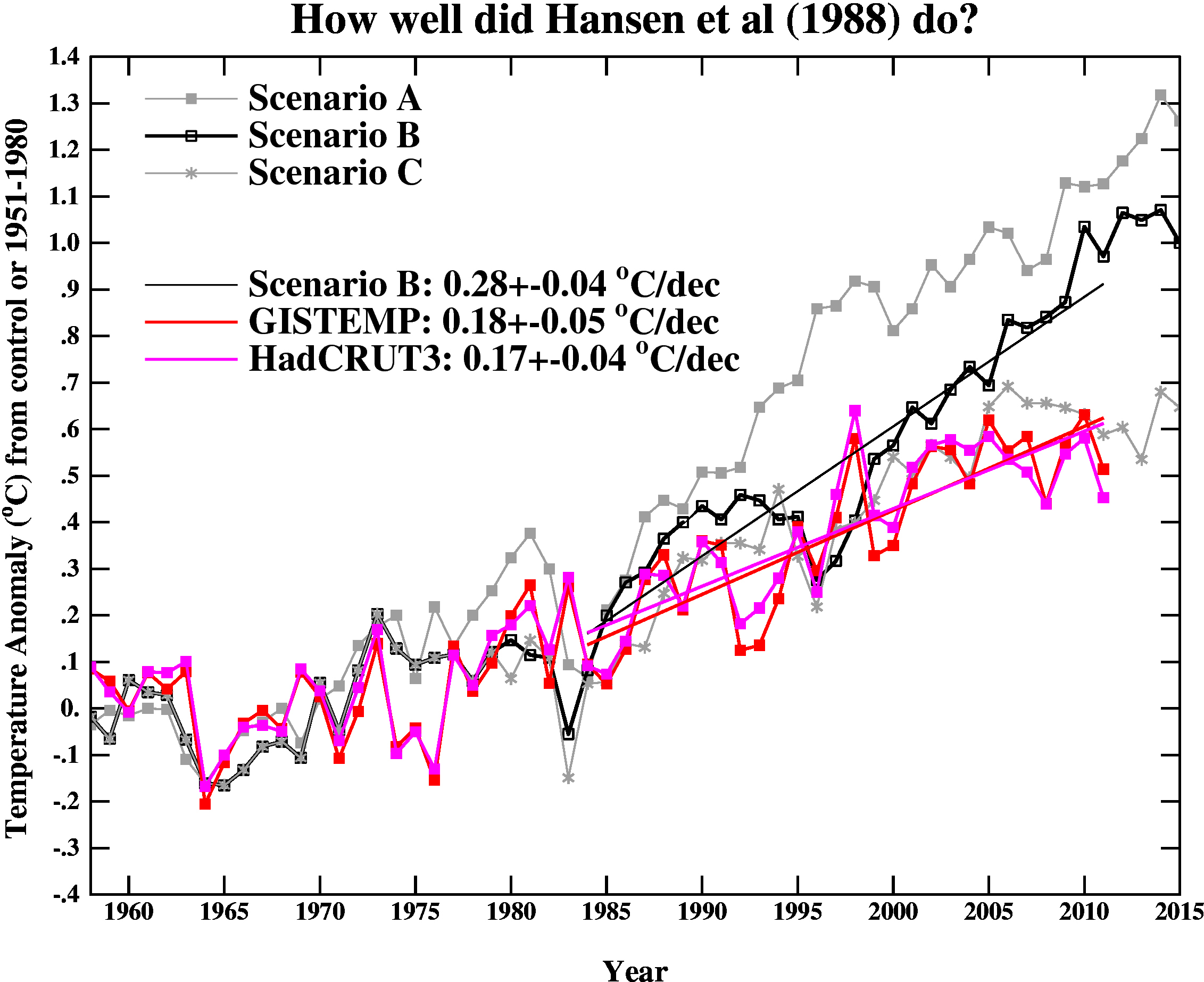 As we stated before, the Hansen et al ‘B’ projection is running warm compared to the real world (exactly how much warmer is unclear). As discussed in Hargreaves (2010), while this simulation was not perfect, it has shown skill in that it has out-performed any reasonable naive hypothesis that people put forward in 1988 (the most obvious being a forecast of no-change). However, the use of this comparison to refine estimates of climate sensitivity should be done cautiously, as the result is strongly dependent on the magnitude of the assumed forcing, which is itself uncertain. Recently there have been some updates to those forcings, and so my previous attempts need to be re-examined in the light of that data and the uncertainties (particular in the aerosol component). However, this is a complicated issue, and requires more space than I really have here to discuss, so look for this in an upcoming post.

Overall, given the latest set of data points, we can conclude (once again) that global warming continues.

111 Responses to "2011 Updates to model-data comparisons"