We recently published a study in Scientific Reports titled Comparing the model-simulated global warming signal to observations using empirical estimates of unforced noise. Our study seemed to generated a lot of interest and we have received many inquires regarding its findings. We were pleased with some of coverage of our study (e.g., here) but we were disappointed that some outlets published particularly misleading articles (e.g, here, here, and here). Since there appears to be some confusion regarding our study’s findings, we would like to clarify some points (see also MM4A’s discussion).

We also found that over the most recent decade or so, it is unlikely that the underlying global warming signal (the long-term externally forced component of temperature change) has been increasing at a rate characteristic of the worst-case IPCC emissions scenario (more on this below).

This last finding is what generated most of the attention for our article but it would appear that the finding has been largely misinterpreted. Part of the confusion stems form the Duke University press release which used the headline “Global Warming More Moderate Than Worst-Case Models”. The news department created this headline as a replacement for our suggested headline of “Global Warming Progressing at Moderate Rate, Empirical Data Suggest”. The news department wanted a shorter headline that was easier for the public to understand. Unfortunately, the simplification led many to believe that our study made a forecast for moderate global warming in the future, when in fact our conclusion only applied to the recent past.

Below are some clarifications on specific questions that we have received:

Question: What does your study conclude about Climate Sensitivity (e.g., how much warming we expect for a given change in greenhouse gasses)?

Question: Does your study conclude that all climate models used by the IPCC are useless?

Question: Does your study indicate the warming from the 1970s to the present may be natural rather than human caused? 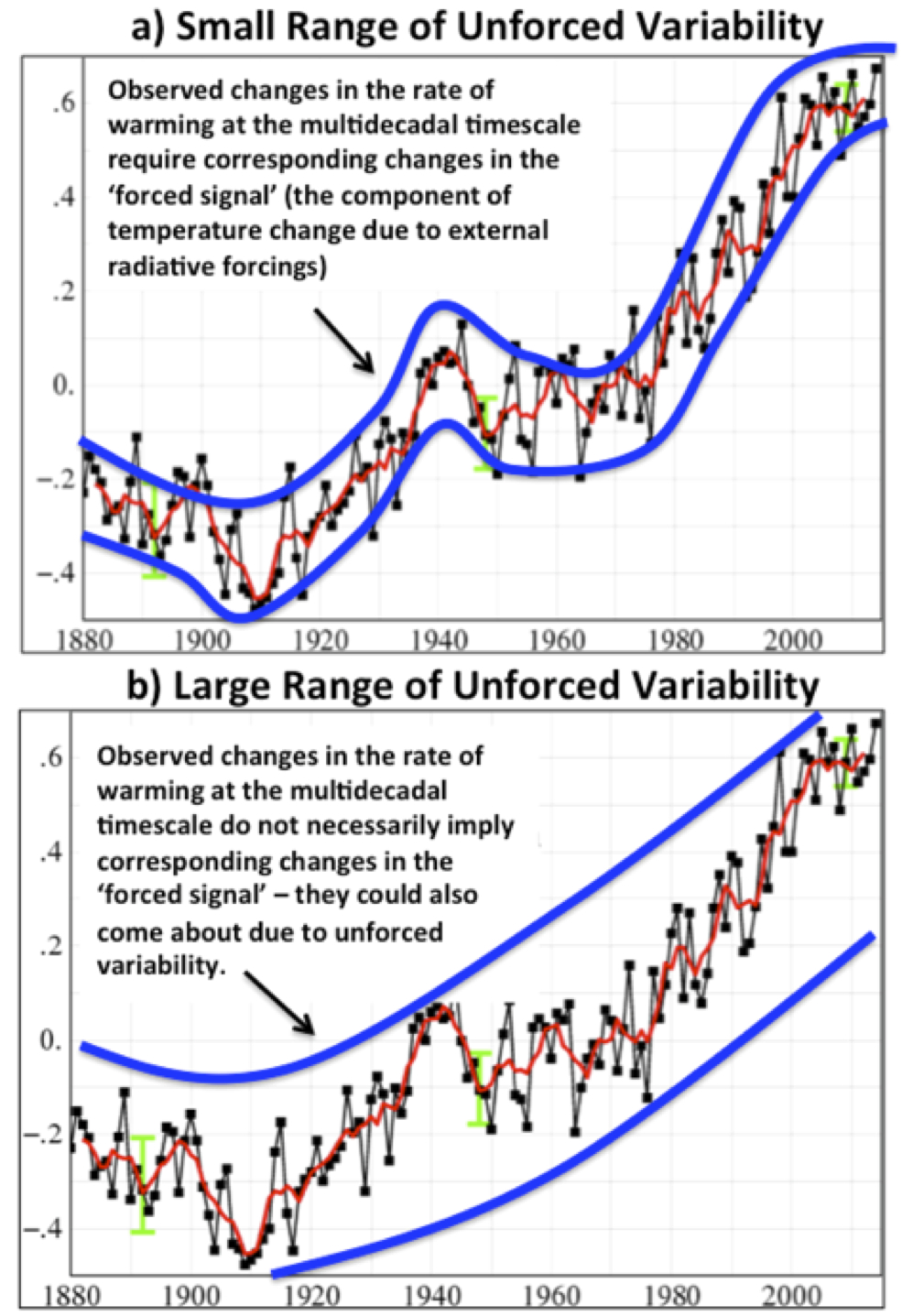 The results of our study indicate that multidecadal changes in the rate of global warming can indeed be attributable to unforced variability and thus the climate system may be more like panel-b than panel-a. This means that the accelerated warming over the last quarter of the 20th century would not ipso-facto require an acceleration in the forced component of warming. Instead, this accelerated warming could have come about due to a combination of anthropogenic forcing and unforced variability. This interpretation of the temperature record is consistent with some previous studies like Del Sole et al (2011), Tung and Zhou (2013), Wu et al., (2011), Fu et al. (2011) and Kratsov et al. (2014). To reiterate, our results indicate that the cumulative warming since the beginning of the 20th century was not possible without positive radiative forcing.

[Editorial Note: On a similar topic, a recent post by Mike discussed problems that arise if one doesn’t properly account for the forced component when estimating internal multidecadal variability, and suggested that it has rather modest (~0.1ºC peak amplitude). He concludes that internal variability has likely partially offset large-scale anthropogenic warming in recent decades, in line with an independent recent study by Dai et al. (2015). Schurer et al (2013) also used the CMIP5 forced last millennium simulations to conclude that internal variability on the multidecadal (50 year) timescale was unlikely to have explained any more than about 25% of the observed temperature trend from 1960.]

Question: Does your study rule-out the rate of warming associated with the IPCC’s RCP8.5 emissions scenario?

Answer: No. We used the multi-model mean warming associated with the RCP 8.5 emissions scenario (out to 2050) as a representation of the quickest rate of forced warming that could conceivably be occurring currently. We then asked the question “how likely is it that the forced component of global warming has been this steep, given recent temperature trends?” We found that it was not very likely to observe an 11-year warming hiatus (2002-2013 in GISTEMP) if the underlying forced warming signal was progressing at a rate characteristic the RCP8.5 scenario. Since the mean radiative forcing progression in RCP8.5 is likely steeper than the radiative forcing progression of the recent past, this finding cannot be used to suggest that models are overestimating the response to forcings and it cannot be used to infer anything about future rates of warming.

We would invite all interested people to read the full paper (it is Open Access) for a more complete explanation and discussion of this complicated subject.