Nature published a great new reconstruction of global temperatures over the past 2 million years today. Snyder (2016) uses 61 temperature reconstructions from 59 globally diverse sediment cores and a correlation structure from model simulations of the last glacial maximum to estimate (with uncertainties) the history of global temperature back through the last few dozen ice ages cycles. There are multiple real things to discuss about this – the methodology, the relatively small number of cores being used (compared to what could have been analyzed), the age modeling etc. – and many interesting applications – constraints on polar amplification, the mid-Pleistocene transition, the duration and nature of previous interglacials – but unfortunately, the bulk of the attention will be paid to a specific (erroneous) claim about Earth System Sensitivity (ESS) that made it into the abstract and was the lead conclusion in the press release.

The paper claims that ESS is ~9ºC and that this implies that the long term committed warming from today’s CO2 levels is a further 3-7ºC. This is simply wrong. 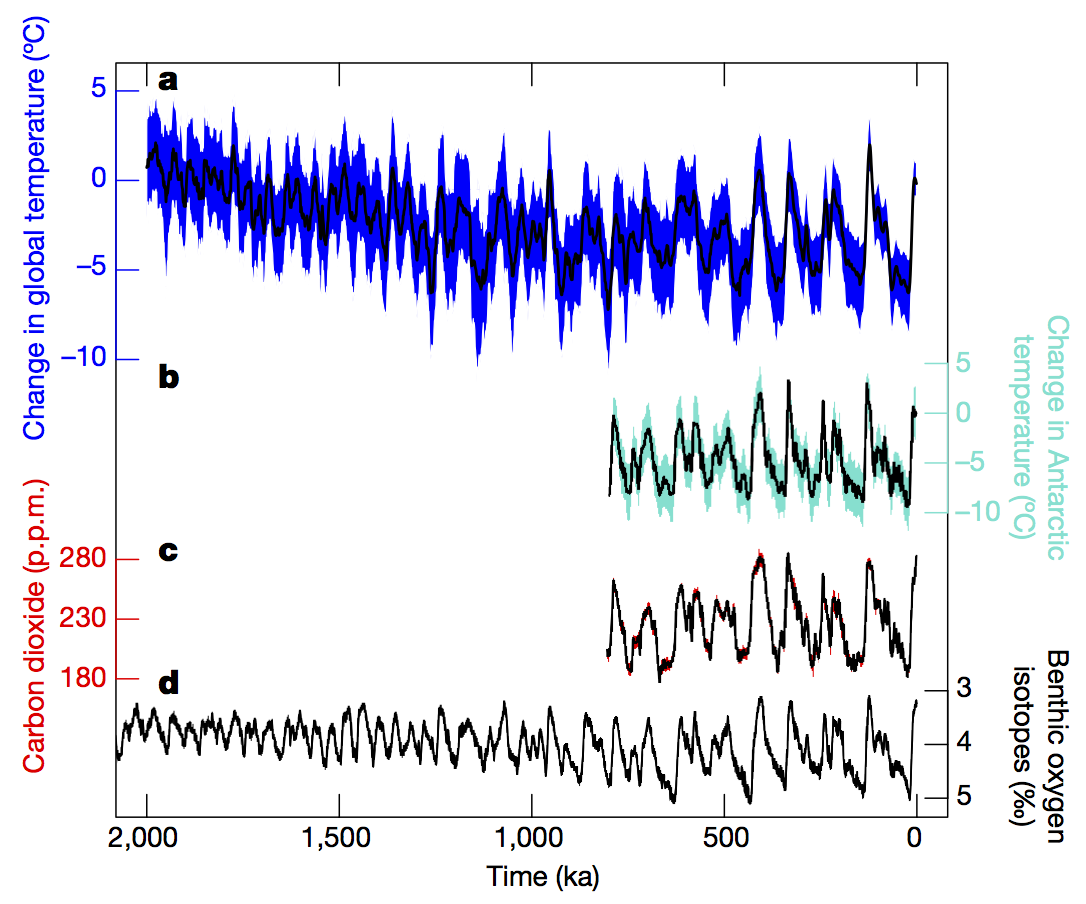 I recently posted a summary of why you can’t constrain ‘Earth System Sensitivity’ (the long term response of the climate system, including ice sheets, vegetation etc.) just by looking at the regression between the forcing from CO2 (and other greenhouse gases) over the ice age cycles. That regression has been looked at before, and Snyder (2016) updates that with her new (and slightly higher amplitude) temperature reconstruction. Unfortunately, she then associates this regression with the Earth System Sensitivity (which it is not) to get a value of ~9ºC for a doubling of CO2.

In the previous post, I outlined how the combination of carbon cycle feedbacks to the Milankovitch forcing and the climate system response to CO2 gives rise to this correlation and that – by itself – it can’t be used to define the latter term. Furthermore, because the regression is being defined over ice age cycles where the biggest changes are related to the (now disappeared) North American and Fenno-Scandanavian ice sheets, the regression might well be much less for situations where only Greenland and West Antarctica are “in play”.

So, what do we think the ESS is, and how does that impact our view of committed warming today? There have been a few papers on this; Hansen et al (2008), Lunt et al (2010) and Palaeosens (2012). They have focused on looking at the warmer climates of the Cenozoic (the Pliocene, etc.) to avoid the confusion from the response of ice sheets to orbital forcing during the ice age cycles of the Pleistocene, but obviously have significant uncertainties due to less precision about ancient greenhouse gas levels. The ESS values range from about 4.5ºC to 6ºC for a doubling of CO2. One other study came up with substantially higher numbers derived from the Pliocene CO2 (Pagani et al, 2010), but a number of assumptions made there limit it’s applicability to today’s climate.

The current energy imbalance (just a little less than 1 W/m2) implies that the planet would need to warm by ~ 1 x S / 3.7 ºC to restore an equilibrium, and using the standard climate sensitivity of 3ºC for a doubling of CO2, implies a committed warming of 0.8ºC or so. To leap from that to the claimed 3-7ºC warming requires that the changes in the ice sheets and vegetation arising from the current and (medium term) committed warming would increase the radiative imbalance by another ~2 W/m2 – and that is extreme (for reference, the changes between the last ice age and now from these factors is only about 4 W/m2 (Kohler et al, 2010) with the huge impact of the N. American and European ice sheets included).

Thus, Snyder’s claim of a committed warming of 3-7ºC is based on an incorrect method for defining ESS, an inappropriate application of this to the present and is inconsistent with current estimates of the radiative imbalance and plausible future changes in ice sheets.

For clarification, this is not an argument about what ESS is, nor is it a claim that we should ignore the long-term responses of the system to current forcing, nor does it mean that paleoclimate has nothing to tell us about future changes (au contraire!). The objection I have is only to this very specific calculation and its subsequent application.

I don’t want to speculate on how this situation can have occurred. However the maxim that “extraordinary claims require extraordinary evidence” suggests that it might have behoved the editors to require further checks of such a dramatic statement before going to press. As it is, many will claim that this is yet another example of a high profile journal going for press attention over rigourous science. The net result of the conflicting media reports and criticism will likely be a greater confusion about the relevant science, and an overshadowing of what is at heart a good contribution to understanding climate history and that is a shame.

30 Responses to "The Snyder Sensitivity Situation"