What he hasn’t understood is that the IPCC merely assesses published climate research, much of which is conducted with global climate models that indeed treat the earth as a sphere. This lack of knowledge is surprising from a man who, according to the biography, joined the Australian Bureau of Meteorology in 1960, and retired in 1998 as head of the National Climate Centre.

It is also clear that Kininmonth’s calculations are based on wrong assumptions. When looking at the effect of changes in greenhouse gases, one must look at how their forcing corresponds to the energy balance at the top of the atmosphere. But Kininmonth instead looks at the energy balance at the surface where a lot of other things also happen, and where both tangible and latent energy flows are present and make everything more complicated.

It is easier to deal with the balance at the top of the atmosphere or use a simplified description that includes convection and radiation as discussed here previously on RealClimate and presented in Benestad (2016).

Another weak point is Kininmonth’s assumption of the water vapour being constant and at same concentrations as in the tropics over the whole globe. Focusing on the tropics easily gives too high values ​​for water vapour if applied to the whole planet.

Furthermore, there are important feedback effects that were not taken into account in his calculations. Kininmonth used MODTRAN, but he must show how MODTRAN was used to arrive at figures that differ from other calculations, which also use MODTRAN. It is an important principle in science that others can repeat the same calculations and arrive at the same answer. You can play with MODTRAN on its website, but it is still important to explain how you arrive at your answers.

In contrast to Kininmonth simple estimates, both feedback effects and clouds are captured much better with global climate models that also use the same physics as in MODTRAN (Huang et al., 2007). It is also important that such calculations and models are thoroughly evaluated (Benestad et al., 2015), and this is also applies to Kininmonth’s calculations.

Another surprising claim that Kininmonth made was that ocean currents are the only plausible explanation for the warming of the tropical reservoir, because he somehow thinks that there has been a reduction in the transport of heat to higher latitudes due to a mysterious slow down of ocean currents. It is easy to check trends in sea surface temperatures and look for signs that heat transport towards higher latitudes has weakened. Such a hypothetical slowdown would suggest weaker ocean surface warming in the high latitudes, which is not supported by data (Figure 1). 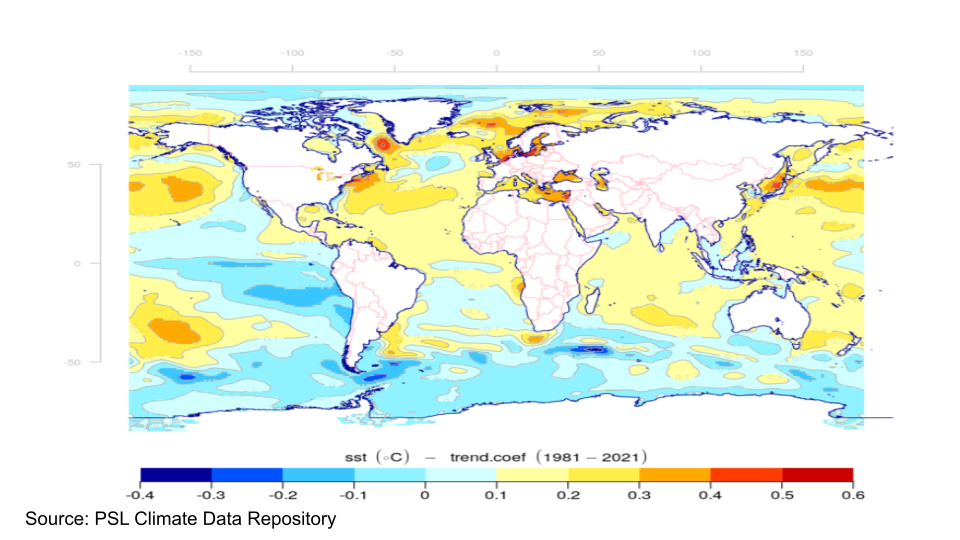 Kininmonth also explains the warming in the Arctic in terms of increased latent heat transfer from lower latitudes. It’s interesting that he needs to invoke both a slowdown and a speed-up of heat transport from the tropics to higher latitudes this way, and this complicates his concept. And if this were true, then we would expect to see increased cloud cover (and increased precipitation) there. Cloud cover has increased over limited areas where the ice has retreated, but this increase seems to be related to local moisture sources and probably not from increased storm activity or water vapour coming from low latitudes.

We can end on another strange point that Kininmonth makes in his misguided rethink of the greenhouse effect, namely that the sea temperature in the tropics correlates well with the atmospheric temperatures. This is of course connected with ENSO, but this is nothing new and it is hard to see why this would be relevant in this case.