You are here: Home / Archives for Climate Science / Paleoclimate

The long-awaited NAS synthesis report on surface temperature reconstructions over the last few millennia is being released today. It’s a long (155 page) report and will take a while to digest, but we applaud the committee for having tried to master a dense thicket of publications and materials on the subject over a relatively short time.

It is probably expecting too much for one report might to put to rest all the outstanding issues in a still-developing field. And given the considerable length of the report, we have little doubt that keen contrarians will be able to mine the report for skeptical-sounding sentences and cherry-pick the findings. However, it is the big picture conclusions that have the most relevance for the lay public and policymakers, and it is re-assuring (and unsurprising) to see that the panel has found reason to support the key mainstream findings of past research, including points that we have highlighted previously:
END_OF_DOCUMENT_TOKEN_TO_BE_REPLACED

Realclimate recently gave a detailed review of the issues surrounding the Von Storch et al. (2004) Science article that purported to show that the paleo-reconstructions of Mann et al. were invalid. Part of the review centered on a comment of Wahl, Amman and myself and the response to it by Von Storch et al that appeared on April 27 in Science. The response admitted that our critique of their original results was correct but then opened up a new area of debate. As in their original 2004 article von Storch et al had used a coupled climate model (AOGCM) to simulate the temperatures of the last two thousand years. They had then generated pseudo-proxies by adding noise at selected spatial locations to the AOGCM generated temperature histories. The added noise was purportedly designed to represent non-climatic effects such as disease or insect infestation. This simulated ‘noisy’ world then can be used as a test-bed for the reconstruction methodology. A given analysis procedure is validated if it successfully recovers the original AOGCM noise free results and could be rejected if it fails to recover the original results. Of course such testing only makes sense if the simulated test world has characteristics similar to the real-world. END_OF_DOCUMENT_TOKEN_TO_BE_REPLACED

Today, Science published an important comment pointing out that there were serious errors in a climate research article that it published in October 2004. The article concerned (Von Storch et al. 2004) was no ordinary paper: it has gone through a most unusual career. Not only did it make many newspaper headlines [New Research Questions Uniqueness of Recent Warming, Past Climate Change Questioned etc.] when it first appeared, it also was raised in the US Senate as a reason for the US not to join the global climate protection efforts. It furthermore formed a part of the basis for the highly controversial enquiry by a Congressional committee into the work of scientists, which elicited sharp protests last year by the AAAS, the National Academy, the EGU and other organisations. It now turns out that the main results of the paper were simply wrong.
END_OF_DOCUMENT_TOKEN_TO_BE_REPLACED

Lots of press has been devoted to four papers in this week’s Science, on the topic of ice sheets and sea level.

We’ve already discussed the new evidence that Greenland’s glaciers are speeding up. What is new this week is an effort to evaluate the impact of future warming on Greenland by looking at what happened to it last time it got very warm — namely during the Last InterGlacial (LIG) period, about 125,000 years ago. The same group of authors looked at this in two ways, using NCAR’s Community Climate System model (CCSM) coupled to a state-of-the-art 3-D ice sheet model.
END_OF_DOCUMENT_TOKEN_TO_BE_REPLACED

Almost 30 years ago, Jule Charney made the first modern estimate of the range of climate sensitivity to a doubling of CO2. He took the average from two climate models (2ºC from Suki Manabe at GFDL, 4ºC from Jim Hansen at GISS) to get a mean of 3ºC, added half a degree on either side for the error and produced the canonical 1.5-4.5ºC range which survived unscathed even up to the IPCC TAR (2001) report. Admittedly, this was not the most sophisticated calculation ever, but individual analyses based on various approaches have not generally been able to improve substantially on this rough estimate, and indeed, have often suggested that quite high numbers (>6ºC) were difficult to completely rule out. However, a new paper in GRL this week by Annan and Hargreaves combines a number of these independent estimates to come up with the strong statement that the most likely value is about 2.9ºC with a 95% probability that the value is less than 4.5ºC. END_OF_DOCUMENT_TOKEN_TO_BE_REPLACED 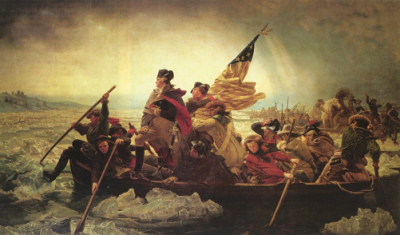 The image that brought this issue to mind was seeing ‘Washington crossing the Delaware’ at the Met the other day and seeing the iceberg-like ice it was imagined (75 years after the event) that the rebels had had to row through in 1776. The first thing I noticed was that the ice is completely wrong for a river (which is just one of the errors associated with this picture apparently). River ice is almost always of the ‘pancake’ variety (as this photo from the Hudson river shows), and doesn’t form ‘growlers’. However, the confusion of artistic license with climatology appears to be a bit of a theme in other oft-cited works as well…. END_OF_DOCUMENT_TOKEN_TO_BE_REPLACED

With the recent death of Sir Nicholas Shackleton, paleoclimatology lost one of its brightest pioneers. Over the last ~40 years, Nick made numerous far-reaching contributions to our understanding of how climates varied in the past, and through those studies, he identified factors that are critically important for climate variability in the future. His career neatly encompasses the birth of the new science of paleoceanography to its synthesis into the even newer science of ‘Earth Systems’; he made major contributions to these evolving fields throughout his life, and his insightful papers are required reading for students of paleoclimatology.
END_OF_DOCUMENT_TOKEN_TO_BE_REPLACED 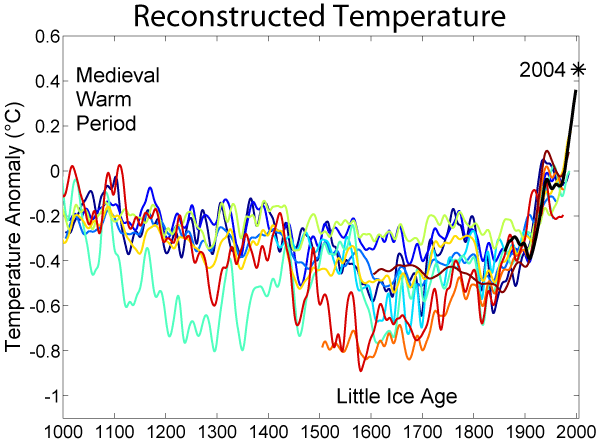 This is not to say that all estimates agree in their details. Indeed, there is a fair scatter among the various published estimates. END_OF_DOCUMENT_TOKEN_TO_BE_REPLACED

Nature this week has an excellent summary of the state of the science with regards to possible changes in the ocean thermohaline (or meridional) circulation in the Atlantic and its impact on climate. Even though it quotes a couple of us, it’s still worth reading if you want to understand how results like the Bryden et al paper – that suggested that the Atlantic overturning had reduced by 30% in recent decades – are assimilated into the scientific picture. END_OF_DOCUMENT_TOKEN_TO_BE_REPLACED

One of the central tasks of climate science is to predict the sensitivity of climate to changes in carbon dioxide concentration. The answer determines in large measure how serious the consequences of global warming will be. One common measure of climate sensitivity is the amount by which global mean surface temperature would change once the system has settled into a new equilibrium following a doubling of the pre-industrial CO2 concentration. A vast array of thought has been brought to bear on this problem, beginning with Arrhenius’ simple energy balance calculation, continuing through Manabe’s one-dimensional radiative-convective models in the 1960’s, and culminating in today’s comprehensive atmosphere-ocean general circulation models. The current crop of models studied by the IPCC range from an equilibrium sensitivity of about 1.5°C at the low end to about 5°C at the high end. Differences in cloud feedbacks remain the principal source of uncertainty. There is no guarantee that the high end represents the worst case, or that the low end represents the most optimistic case. While there is at present no compelling reason to doubt the models’ handling of water vapor feedback, it is not out of the question that some unanticipated behavior of the hydrological cycle could make the warming somewhat milder — or on the other hand, much, much worse. Thus, the question naturally arises as to whether one can use information from past climates to check which models have the most correct climate sensitivity.