You are here: Home / Climate Science / A warming pause?
Translations: ( 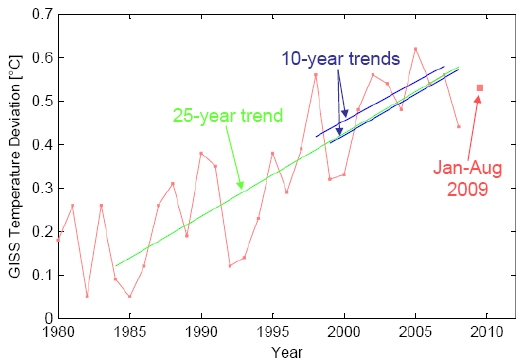 Why do these two surface temperature data sets differ over recent years? We analysed this a while ago here, and the reason is the “hole in the Arctic” in the Hadley data, just where recent warming has been greatest.

Figure 2. The animated graph shows the temperature difference between the two 5-year periods 1999-2003 and 2004-2008. The largest warming has occurred over the Arctic in the past decade and is missing in the Hadley data.

If we want to relate global temperature to global forcings like greenhouse gases, we’d better not have a “hole” in our data set. That’s because global temperature follows a simple planetary heat budget, determined by the balance of what comes in and what goes out. But if data coverage is not really global, the heat budget is not closed. One would have to account for the heat flow across the boundary of the “hole”, i.e. in and out of the Arctic, and the whole thing becomes ill-determined (because we don’t know how much that is). Hence the GISS data are clearly more useful in this respect, and the supposed pause in warming turns out to be just an artifact of the “Arctic hole” in the Hadley data – we don’t even need to refer to natural variability to explain it.

Imagine you want to check whether the balance in your accounts is consistent with your income and spendings – and you find your bank accounts contain less money than you expected, so there is a puzzling shortfall. But then you realise you forgot one of your bank accounts when doing the sums – and voila, that is where the missing money is, so there is no shortfall after all. That missing bank account in the Hadley data is the Arctic – and we’ve shown that this is where the “missing warming” actually is, which is why there is no shortfall in the GISS data, and it is pointless to look for explanations for a warming pause.

It is noteworthy in this context that despite the record low in the brightness of the sun over the past three years (it’s been at its faintest since beginning of satellite measurements in the 1970s), a number of warming records have been broken during this time. March 2008 saw the warmest global land temperature of any March ever recorded in the past 130 years. June and August 2009 saw the warmest land and ocean temperatures in the Southern Hemisphere ever recorded for those months. The global ocean surface temperatures in 2009 broke all previous records for three consecutive months: June, July and August. The years 2007, 2008 and 2009 had the lowest summer Arctic sea ice cover ever recorded, and in 2008 for the first time in living memory the Northwest Passage and the Northeast Passage were simultaneously ice-free. This feat was repeated in 2009. Every single year of this century (2001-2008) has been warmer than all years of the 20th Century except 1998 (which sticks out well above the trend line due to a strong El Niño event).

The bottom line is: the observed warming over the last decade is 100% consistent with the expected anthropogenic warming trend of 0.2 ºC per decade, superimposed with short-term natural variability. It is no different in this respect from the two decades before. And with an El Niño developing in the Pacific right now, we wouldn’t be surprised if more temperature records were to be broken over the coming year or so.

Update: We were told there is a new paper by Simmons et al. in press with JGR that supports our analysis about the Hadley vs GISS trends (sorry, access to subscribers only).

Update: AP has just published an interesting story titled Statisticians reject global cooling, for which they “gave temperature data to four independent statisticians and asked them to look for trends, without telling them what the numbers represented”.