Abuse of the UK libel laws is so commonplace as to require no real introduction (but see the Campaign for libel reform for more details). Because of the ridiculous costs and pro-plaintiff assumptions, it has been (ab)used by many and fought against successfully only by a few. In the realm of discussions about science, Simon Singh’s triumph over a libel suit brought by the British Chiropractors Association stands out, as does Ben Goldacre’s successful £500,000 defense against Matthias Rath – a vitamin salesman peddling bogus AIDS cures. But despite that, it remains (for now) a potent threat to throw around if you want to try to intimidate a critic.

We received this letter on Friday:

Gavin, your comment about Energy & Environment which you made on RealClimate has been brought to my attention:

“The evidence for this is in precisely what happens in venues like E&E that have effectively dispensed with substantive peer review for any papers that follow the editor’s political line. ”

To assert, without knowing, as you cannot possibly know, not being connected with the journal yourself, that an academic journal does not bother with peer review, is a terribly damaging charge, and one I’m really quite surprised that you’re prepared to make. And to further assert that peer review is abandoned precisely in order to let the editor publish papers which support her political position, is even more damaging, not to mention being completely ridiculous.

At the moment, I’m prepared to settle merely for a retraction posted on RealClimate. I’m quite happy to work with you to find a mutually satisfactory form of words: I appreciate you might find it difficult.

I look forward to hearing from you.

The comment in question was made in the post “From blog to Science” and the full context was:

The many existing critiques of peer review as a system (for instance by Richard Smith, ex-editor of the BMJ, or here, or in the British Academy report), sometimes appear to assume that all papers arrive at the journals fully formed and appropriately written. They don’t. The mere existence of the peer review system elevates the quality of submissions, regardless of who the peer reviewers are or what their biases might be. The evidence for this is in precisely what happens in venues like E&E that have effectively dispensed with substantive peer review for any papers that follow the editor’s political line – you end up with a backwater of poorly presented and incoherent contributions that make no impact on the mainstream scientific literature or conversation. It simply isn’t worth wading through the dross in the hope of finding something interesting.

The point being that if the ‘peer-review’ bar gets lowered, the result is worse submissions, less impact and a declining reputation. Something that fits E&E in spades. This conclusion is based on multiple years of evidence of shoddy peer-review at E&E and, obviously, on the statements of the editor, Sonja Boehmer-Christiansen. She was quoted by Richard Monastersky in the Chronicle of Higher Education (3 Sep 2003) in the wake of the Soon and Baliunas fiasco:

The journal’s editor, Sonja Boehmer-Christiansen, a reader in geography at the University of Hull, in England, says she sometimes publishes scientific papers challenging the view that global warming is a problem, because that position is often stifled in other outlets. “I’m following my political agenda — a bit, anyway,” she says. “But isn’t that the right of the editor?”

So the claim that the ‘an editor publishes papers based on her political position’ while certainly ‘terribly damaging’ to the journal’s reputation is, unfortunately, far from ridiculous.

Other people have investigated the peer-review practices of E&E and found them wanting. Greenfyre, dissecting a list of supposedly ‘peer-reviewed’ papers from E&E found that:

Further, even the editor states that it is not a science journal and that it is politically motivated/influenced. Finally, at least some of what it publishes is just plain loony.

Also, see comments from John Hunter and John Lynch. Nexus6 claimed to found the worst climate paper ever published in its pages, and that one doesn’t even appear to have been proof-read (a little like Bill’s email). A one-time author, Roger Pielke Jr, said “…had we known then how that outlet would evolve beyond 1999 we certainly wouldn’t have published there. “, and Ralph Keeling once asked, “Is it really the intent of E&E to provide a forum for laundering pseudo-science?”. We report, you decide.

We are not surprised to find that Bill Hughes (the publisher) is concerned about his journal’s evidently appalling reputation. However, perhaps the way to fix that is to start applying a higher level of quality control rather than by threatening libel suits against people who publicly point out the problems? Is being known as the journal who tries to sue critics of their editorial policies (or worse, tries to intimidate critics by threatening libel suits) really going to help?

As a final note, if you think that threatening unjustifiable UK libel suits against valid criticism is an appalling abuse, feel free to let Bill Hughes know (but please be polite), and add your support to the Campaign for libel reform in the UK which looks to be making great headway. In the comments, feel free to list your examples of the worst papers ever published in E&E.

Bill, if you are reading, you can take this ‘form of words’ as a full and complete response to your email.

Update: The Guardian reports on the story, and Bill Hughes sends another email.

When you analyse your data, you usually assume that you know what the data really represent. Or do you? This has been a question that over time has marred studies on solar activity and climate, and more recently cosmic rays and clouds. And yet again, this issue pops up in two recent papers; One by Feulner (‘The Smithsonian solar constant data revisited‘) and another by Legras et al. (‘A critical look at solar-climate relationships from long temperature series.’). Both these papers show how easily it is to be fooled by your data if you don’t know what they really represent.

END_OF_DOCUMENT_TOKEN_TO_BE_REPLACED

There are two new papers in Nature this week that go right to the heart of the conversation about extreme events and their potential relationship to climate change. This is a complex issue, and one not well-suited to soundbite quotes and headlines, and so we’ll try and give a flavour of what the issues are and what new directions these new papers are pointing towards.
END_OF_DOCUMENT_TOKEN_TO_BE_REPLACED

There is a lot of talk around about why science isn’t being done on blogs. It can happen though, and sometimes blog posts can even end up as (part of) a real Science paper. However, the process is non-trivial and the relatively small number of examples of such a transition demonstrate clearly why blog science is not going to replace the peer-reviewed literature any time soon.
END_OF_DOCUMENT_TOKEN_TO_BE_REPLACED

or…Some thoughts on Personal Responsibility and the Peer Review Process

Ryan O’Donnell made a series of serious of allegations against me at ClimateAudit, in the context of our friendly dispute about whether his new paper in the Journal of Climate supports or ‘refutes’ my own results, published in Nature.

To his credit, Ryan has offered to retract these allegations, now that he is a little better acquainted with the facts. However, it is still important, I think, to set the record straight from my point of view. There were such a great number of claims about my “dishonesty,” “duplicity” and [implied] stupidity, all of which are untrue, that it really isn’t worth trying to respond in any detail. Just responding to the main two ought to suffice to make the point. END_OF_DOCUMENT_TOKEN_TO_BE_REPLACED 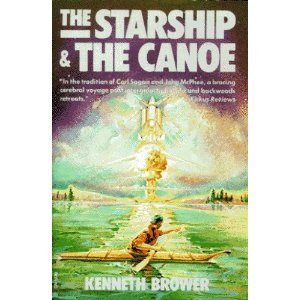 It turns out that Brower has wondered the same thing, and in a recent article in The Atlantic, he speculates on the answer. “How could someone as smart as Freeman Dyson,” writes Brower, “be so wrong about climate change and other environmental concerns..?”
END_OF_DOCUMENT_TOKEN_TO_BE_REPLACED

The temperature reconstruction of O’Donnell et al. (2010) confirms that West Antarctica is warming — but underestimates the rate

At the end of my post last month on the history of Antarctic science I noted that I had an initial, generally favorable opinion of the paper by O’Donnell et al. in the Journal of Climate. O’Donnell et al. is the peer-reviewed outcome of a series of blog posts started two years ago, mostly aimed at criticizing the 2009 paper in Nature, of which I was the lead author. As one would expect of a peer-reviewed paper, those obviously unsupportable claims found in the original blog posts are absent, and in my view O’Donnell et al. is a perfectly acceptable addition to the literature. O’Donnell et al. suggest several improvements to the methodology we used, most of which I agree with in principle. Unfortunately, their actual implementation by O’Donnell et al. leaves something to be desired, and yield a result that is in disagreement with independent evidence for the magnitude of warming, at least in West Antarctica. 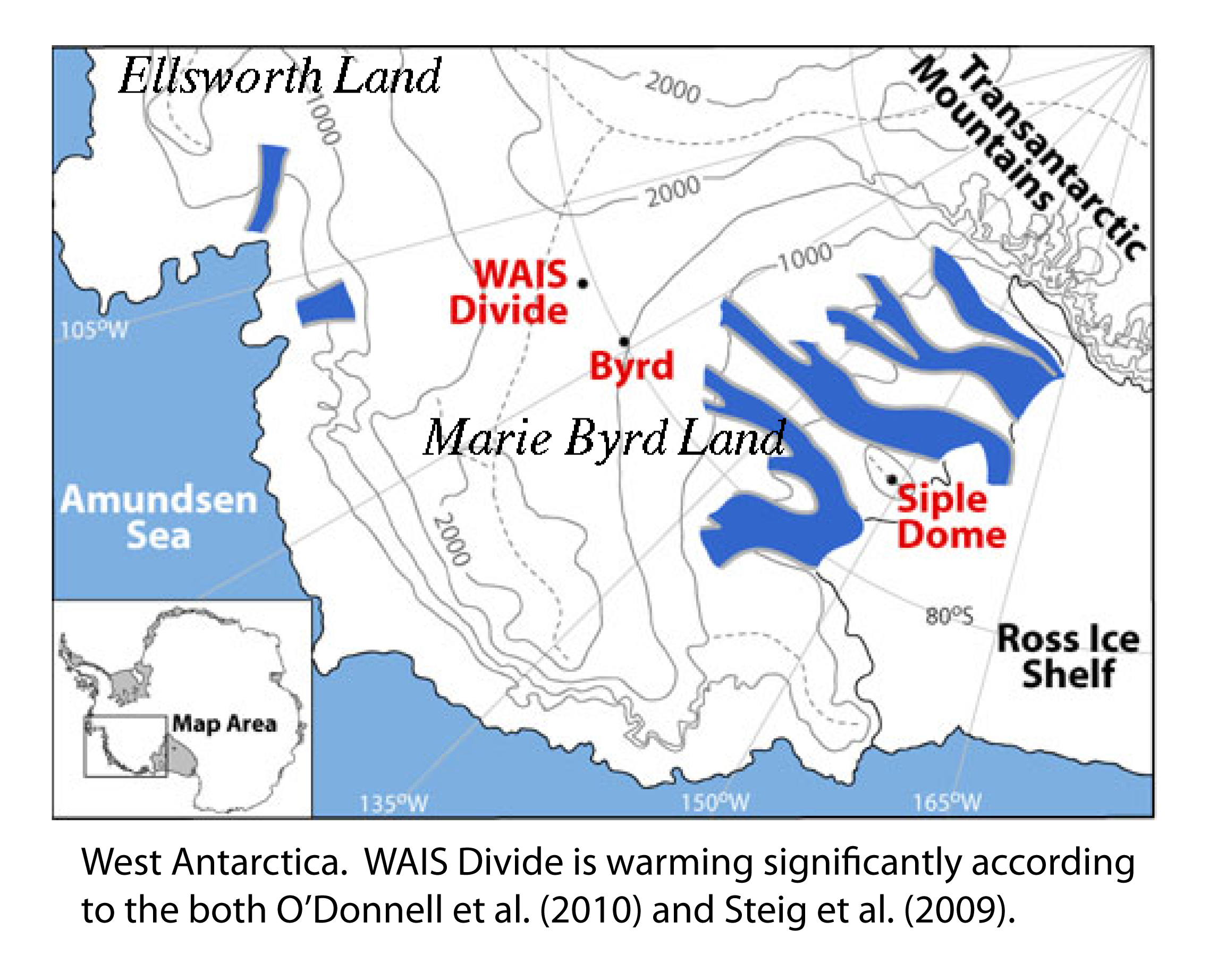 In this post, I’ll summarize the key methodological changes suggested by O’Donnell et al., discuss how their results compare with our results, and the implications for our understanding of recent Antarctic climate change. I’ll then try to make sense of how O’Donnell et al. have apparently wound up with an erroneous result.
END_OF_DOCUMENT_TOKEN_TO_BE_REPLACED