Many of the news articles and blog posts covering the CLOUD article understandably focused much more on the cosmic-ray/cloud connection as it is easy to tie this connection into the climate debate. While many of the articles did a good job at reporting the CLOUD results within the big picture of cosmic-ray/cloud connections, some articles erroneously claimed that the CLOUD results proved the physics behind a strong cosmic-ray/cloud/climate connection, and others still just got it very muddled. A person hoping to learn more about cosmic rays and clouds likely ended up confused after reading the range of articles published. This potential confusion (along with many great questions and comments in Gavin’s CLOUD post) motivated me to write a general overview of the potential physical mechanisms for cosmic rays affecting clouds. In this post, I will focus on what we know and don’t know regarding the two major proposed physical mechanisms connecting cosmic rays to clouds and climate.
END_OF_DOCUMENT_TOKEN_TO_BE_REPLACED

After a record-breaking 2010 in terms of surface melt area in Greenland Tedesco et al, 2011, numbers from 2011 have been eagerly awaited. Marco Tedseco and his group have now just reported their results. This is unrelated to other Greenland meltdown this week that occurred at the launch of the new Times Atlas.
END_OF_DOCUMENT_TOKEN_TO_BE_REPLACED

END_OF_DOCUMENT_TOKEN_TO_BE_REPLACED

“Well, it’s not really good timing to write about global warming when the summer feels cold and rainy”, a journalist told me last week. Hence, at least here in Germany, there hasn’t been much reporting about the recent evolution of Arctic sea ice – despite the fact that Arctic sea ice extent in July, for example, was the lowest ever recorded for that month throughout the entire satellite record. Sea-ice extent in August was also extremely low, second only to August 2007 (Fig. 1). Whether or not we’re in for a new September record, the next weeks will show. 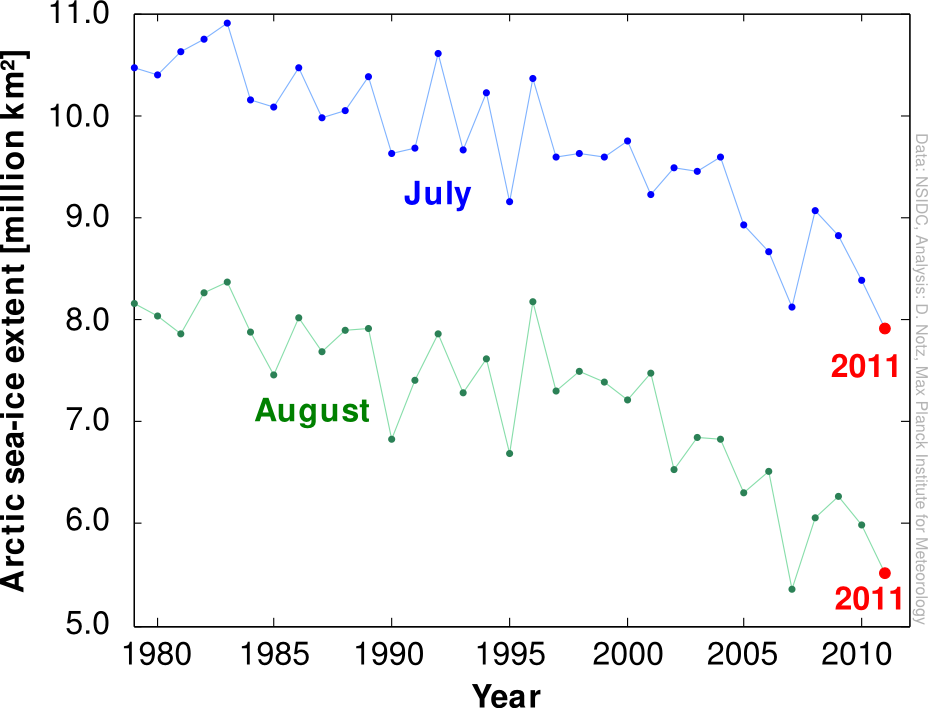 END_OF_DOCUMENT_TOKEN_TO_BE_REPLACED

Much is being written about the very public resignation of Wolfgang Wagner from the editorship of Remote Sensing over the publication of Spencer and Braswell (2011) – and rightly so. It is a very rare situation that an editor resigns over the failure of peer review, and to my knowledge it has only happened once before in anything related to climate science – the mass resignation of 6 editors at Climate Research in 2003 in the wake of the Soon and Baliunas debacle. Some of the commentary this weekend has been reasonable, but many people are obviously puzzled by this turn of events and unsupported rumours are flying around.

END_OF_DOCUMENT_TOKEN_TO_BE_REPLACED

Here is a continuation of the last Arctic sea ice discussion as we get closer to the 2011 minimum. All figures will update continuously.