You are here: Home / Climate Science / On record-breaking extremes

It is a good tradition in science to gain insights and build intuition with the help of thought-experiments. Let’s perform a couple of thought-experiments that shed light on some basic properties of the statistics of record-breaking events, like unprecedented heat waves. I promise it won’t be complicated, but I can’t promise you won’t be surprised.

Assume there is a climate change over time that is U-shaped, like the blue temperature curve shown in Fig. 1. Perhaps a solar cycle might have driven that initial cooling and then warming again – or we might just be looking at part of a seasonal cycle around winter. (In fact what is shown is the lower half of a sinusoidal cycle.) For comparison, the red curve shows a stationary climate. The linear trend in both cases is the same: zero. 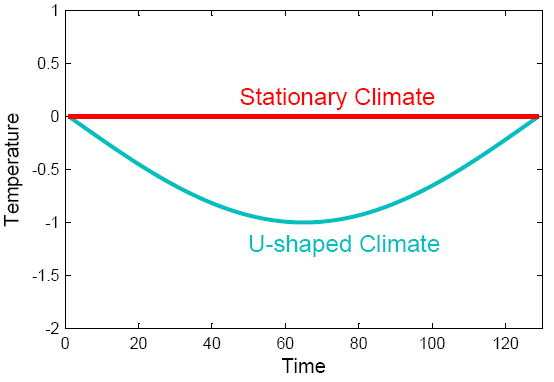 These climates are both very boring and look nothing like real data, because they lack variability. So let’s add some random noise – stuff that is ubiquitous in the climate system and usually called ‘weather’. Our U-shaped climate then looks like the curve below. 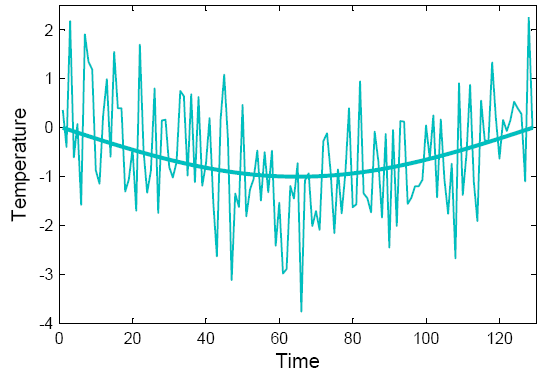 Fig. 2. “Climate is what you expect, weather is what you get.” One realisation of the U-shaped climate with added white noise.

So here comes the question: how many heat records (those are simply data points warmer than any previous data point) do we expect on average in this climate at each point in time? As compared to how many do we expect in the stationary climate? Don’t look at the solution below – first try to guess what the answer might look like, shown as the ratio of records in the changing vs. the stationary climate.

When I say “expected on average” this is like asking how many sixes one expects on average when rolling a dice a thousand times. An easy way to answer this is to just try it out, and that is what the simple computer code appended below does: it takes the climate curve, adds random noise, and then counts the number of records. It repeats that a hundred thousand times (which just takes a few seconds on my old laptop) to get a reliable average.

For the stationary climate, you don’t even have to try it out. If your series is n points long, then the probability that the last point is the hottest (and thus a record) is simply 1/n. (Because in a stationary climate each of those n points must have the same chance of being the hottest.) So the expected number of records declines as 1/n along the time series. 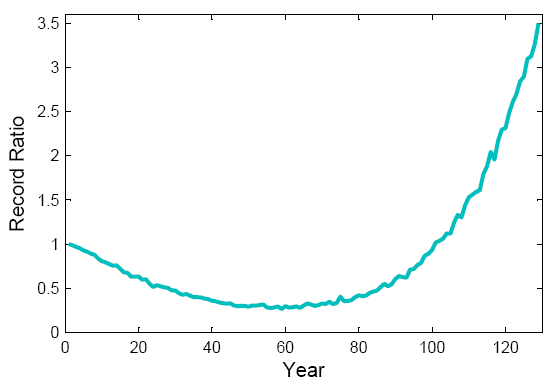 So here is one interesting result: even though the linear trend is zero, the U-shaped climate change has greatly increased the number of records near the end of the period! Zero linear trend does not mean there is no climate change. About two thirds of the records in the final decade are due to this climate change, only one third would also have occurred in a stationary climate. (The numbers of course depend on the amplitude of the U as compared to the amplitude of the noise – in this example we use a sine curve with amplitude 1 and noise with standard deviation 1.)

Next, pretend you are one of those alarmist politicized scientists who allegedly abound in climate science (surely one day I’ll meet one). You think of a cunning trick: how about hyping up the number of records by ignoring the first, cooling half of the data? Only use the second half of the data in the analysis, this will get you a strong linear warming trend instead of zero trend!

Here is the result shown in green: 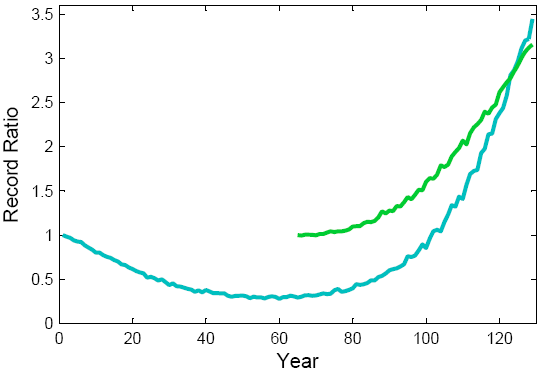 Fig. 4. The record ratio for the U-shaped climate (blue) as compared to that for a climate with an accelerating warming trend, i.e. just the second half of the U (green).

Oops. You didn’t think this through properly. The record ratio – and thus the percentage of records due to the climatic change – near the end is almost the same as for the full U!

The explanation is quite simple. Given the symmetry of the U-curve, the expected number of records near the end has doubled. (The last point has to beat only half as many previous points in order to be a record, and in the full U each climatic temperature value occurs twice.) But for the same reason, the expected number of records in a stationary climate has also doubled. So the ratio has remained the same.

If you try to go to even steeper linear warming trends, by confining the analysis to ever shorter sections of data near the end, the record ratio just drops, because the effect of the shorter series (which makes records less ‘special’ – a 20-year heat record simply is not as unusual as a 100-year heat record) overwhelms the effect of the steeper warming trend. (That is why using the full data period rather than just 100 years gives a stronger conclusion about the Moscow heat record despite a lesser linear warming trend, as we found in our PNAS paper.)

Back to Moscow in July

That insight brings us back to a more real-world example. In our recent PNAS paper we looked at global annual-mean temperature series and at the July temperatures in Moscow. In both cases we find the data are not well described by a linear trend over the past 130 years, and we fitted smoothed curves to describe the gradual climate changes over time. In fact both climate evolutions show some qualitative similarities, i.e. a warming up to ~1940, a slight subsequent cooling up to ~ 1980 followed by a warming trend until the present. For Moscow the amplitude of this pattern is just larger, as one might expect (based on physical considerations and climate models) for a northern-hemisphere continental location.

NOAA has in a recent analysis of linear trends confirmed this non-linear nature of the climatic change in the Moscow data: for different time periods, their graph shows intervals of significant warming trends as well as cooling trends. There can thus be no doubt that the Moscow data do not show a simple linear warming trend since 1880, but a more complex time evolution. Our analysis based on the non-linear trend line strongly suggests that the key feature that has increased the expected number of recent records to about five times the stationary value is in fact the warming which occurred after 1980 (see Fig. 4 of our paper, which shows the absolute number of expected records over time). Up until then, the expected number of records is similar to that of a stationary climate, except for an earlier temporary peak due to the warming up to ~1940.

This fact is fortunate, since there are question marks about the data homogeneity of these time series. Apart from the urban adjustment problems discussed in our previous post, there is the possibility for a large warm bias during warm sunny summers in the earlier part, because thermometers were then not shaded from reflected sunlight – a problem that has been well-documented for pre-1950 instruments in France (Etien et al., Climatic Change 2009). Such data issues don’t play a major role for our record statistics if that is determined mostly by the post-1980 warming. This post-1980 warming is well-documented by satellite data (shown in Fig. 5 of our paper).

Our statistical approach nevertheless is not in itself an attribution study. This term usually applies to attempts to attribute some event to a physical cause (e.g., greenhouse gases or solar variability). As Martin Vermeer rightly said in a comment to our previous post, such attribution is impossible by only analysing temperature data. We only do time series analysis: we merely split the data series into a ‘trend process’ (a systematic smooth climate change) and a random ‘noise process’ as described in time-series text books (e.g. Mudelsee 2010), and then analyse what portion of record events is related to either of these. This method does not say anything about the physical cause of the trend process – e.g., whether the post-1980 Moscow warming is due to solar cycles, an urban heat island or greenhouse gases. Other evidence – beyond our simple time-series analysis – has to be consulted to resolve such questions. Given that it coincides with the bulk of global warming (three quarters of which occurred from 1980 onwards) and is also predicted by models in response to rising greenhouse gases, this post-1980 warming in Russia is, in our view, very unlikely just due to natural variability.

You don’t need a 1,000-page computer model code to find out some pretty interesting things about extreme events. The few lines of matlab code below are enough to perform the Monte Carlo simulations leading to our main conclusion regarding the Moscow heat wave – plus allowing you to play with the idealised U-shaped climate discussed above. The code takes a climate curve of 129 data points – either half a sinusoidal curve or the smoothed July temperature in Moscow 1881-2009 as used in our paper – and adds random white noise. It then counts the number of records in the last ten points of the series (i.e. in the last decade of the Moscow data). It does that 100,000 times to get the average number of records (i.e the expected number). For the Moscow series, this code reproduces the calculations of our recent PNAS paper. In a hundred tries we find on average 41 heat records in the final decade, while in a stationary climate it would just be 8. Thus, the observed gradual climatic change has increased the expected number of records about 5-fold. This is just like using a loaded dice that rolls five times as many sixes as an unbiased dice. If you roll one six, there is then an 80% chance that it occurred because the dice is loaded, while there is a 20% chance that this six would have occurred anyway.

To run this code for the Moscow case, first download the file moscow_smooth.dat here.

200 Responses to "On record-breaking extremes"