This is a clear statement that I think is very well supported and correctly reflects the opinion of most climate scientists on the subject (and was re-affirmed in two recent papers (Jones and Stott, 2011;, Huber and Knutti, 2011)). It isn’t an isolated conclusion from a single study, but comes from an assessment of the changing patterns of surface and tropospheric warming, stratospheric cooling, ocean heat content changes, land-ocean contrasts, etc. that collectively demonstrate that there are detectable changes occurring which we can attempt to attribute to one or more physical causes.

Yet, in a paper just out in BAMS (Curry and Webster, 2011) this statement is apparently evidence that IPCC is unable to deal with uncertainty. Furthermore, Judith Curry has reiterated on her blog that the term ‘most’ is imprecise and undefined. For instance:

Apart from the undefined meaning of “most” in AR4 (which was subsequently clarified by the IPCC), the range 50.1-95% is rather imprecise in the context of attribution.

However, Curry’s argument is far from convincing, nor is it well formed (why is there a cap at 95%?). Nor was it convincing when I discussed the issue with her in the comments at Collide-a-Scape last year where she made similar points. Since the C&W paper basically repeats that argument (as has also been noticed by Gabi Hegerl et al who have a comment on the paper (Hegerl et al.)), it is perhaps worth addressing these specific issues again.

Let’s start with what the statement actually means. “Most” is an unambiguous adjective (meaning more than half), and ‘very likely’ in IPCC-speak means that the statement is being made with between 90 to 99% confidence (i.e. for every 10 such statements, the scientists expect 9 or more to pan out). Given that some people have found this confusing, it may help somewhat if the contents of the statement are visualised:

Figure 1: Two schematic distributions of possible ‘anthropogenic GHG contributions’ to the warming over the last 50 years. Note that in each case, despite a difference in the mean and variance, the probability of being below 50, is exactly 0.1 (i.e. a 10% likelihood).

The figure shows two Gaussian distributions, both of which have the probability of x being less than 50 at 0.1. i.e. P(x<50)=0.1. If either of them had been the distribution of the estimated increase in global temperatures due to anthropogenic greenhouse gas increases relative to the observed increase, the IPCC statement would have been almost exactly correct (i.e. if x=100*trend_caused_by_GHG/actual_trend). These distributions show a number of key issues that need to be appreciated. First, the actual increase of temperatures purely due to the rise in GHGs is not precisely known (and therefore there is a distribution of potential values). Note that we are presuming that there is a single ‘true’ answer, so the distribution is a measure of our ignorance, not a claim that the answer itself is a random variable.

Third, there is certainly a potential for the increase in temperatures due to anthropogenic GHG changes to be greater than the observed trend because we know that there have been both natural (volcanic and solar) and human-caused (reflective aerosols, land use change) factors that are expected to have lead to cooling over the post-1950 period (therefore there is no cut off at 95% of the actual trend). The actual trend will be a function of the warming factors, balanced by the cooling factors. And of the warming factors, the well-mixed greenhouse gas (CO2, CH4, N2O, CFCs) changes are the dominant term (about 75% of the increase in warming factors from 1950, the rest is related to black carbon effects, ozone etc.).

Fourth, the statement clearly encompasses many different estimates of what the actual trends are being driven by and is not therefore a particularly strong conclusion. Myles Allen (Allen, 2011) points out that during the drafting, the text was changed from ‘contributed substantially’ to ‘most’, and focused on greenhouse gases rather than the total anthropogenic effect specifically in order to have a more quantitative conclusion and more justifiable statement.

Now let’s put some real numbers in here. Attribution is fundamentally a modelling task, and the principal models that can be used are the coupled GCMs – at least to start with. What do they estimate the warming trend from the well-mixed GHGs to have been over the last 50 years? The figure below shows this for some of the GISS CMIP5 models (more model data can be downloaded from CMIP5 portal): 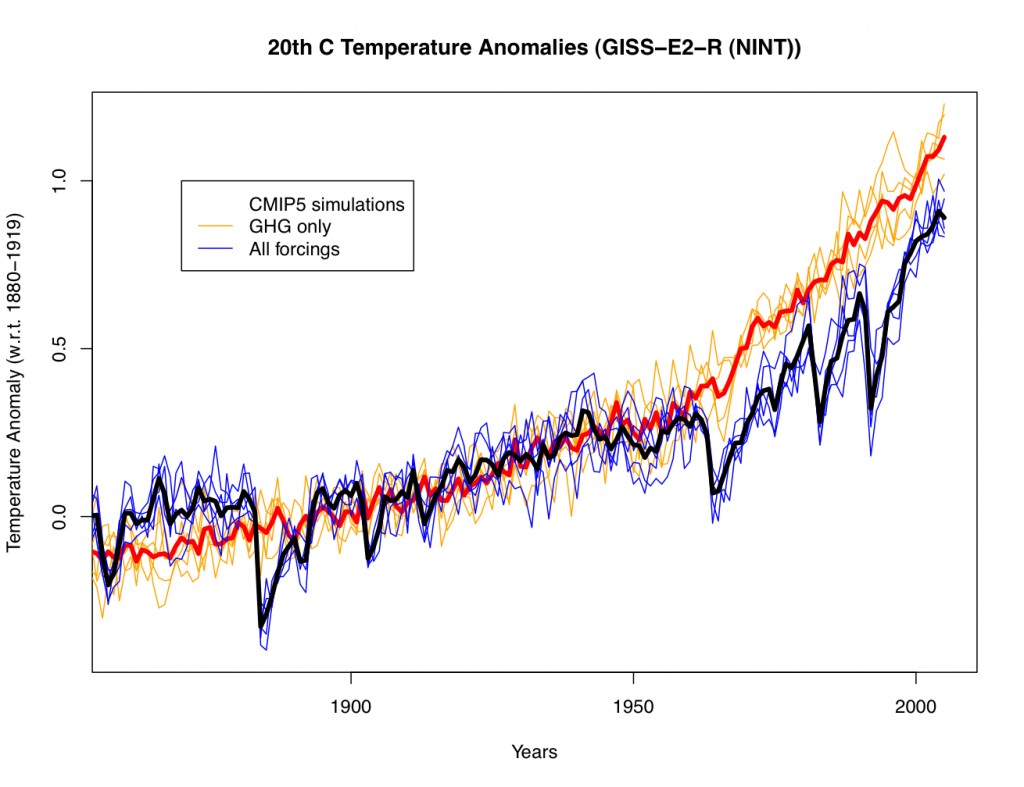 The actual observed trend depends a little on the dataset used, but is around 0.6 +/- 0.05ºC (1 sigma uncertainty in the OLS fit). If we then estimate the percentage (as illustrated above), assuming a 0.2ºC sigma in the model spread, ‘x’ is roughly 140% +/- 35% (1 sigma). If we interpreted that range as a Gaussian distribution (not really a good idea, but simple enough for illustration), we’d estimate that P(x<50%) would be less than 1% (even less likely than the IPCC AR4 statement allowed for).

There are good reasons why the IPCC assessed that the probability was not as low as suggested by the models or any individual attribution paper. Specifically, the overall assessment must take into account potential structural uncertainties that don’t come into the straight model analysis. For instance, the models may systematically be overestimating the GHG-driven trend, they may be underestimating the internal variability, and they may be undersampling the structural uncertainty in making models themselves. The first kind of error would cause an overestimate in the mean of the distribution, while the other factors would cause an underestimate in the variance of the trends – all would increase P(x < 50%). On the other hand, the net forcing is almost certainly less than the effect of anthropogenic GHGs alone and so that biases the mean of the ‘all-forcings’ trends low, and some of the spread in the trends is related to different models having different forcings (biasing the spread wide). These elements can be quantified during the attribution (using fingerprint scaling, monte-carlo emulators etc.), but when they are all taken into account, the difference is less than one might think (it turns out that structural uncertainty likely isn’t being underestimated and the internal variability in models comfortably spans the range inferred in the real world (Yokohata et al., 2011; Santer et al., 2011)).

Curry and Webster specifically bring up two issues that, they claim, lessen the confidence one should have in the IPCC statement: that the history of solar forcing is uncertain in scale, and that aerosol forcings have a huge error bar. These two statements are true as far as they go – the scale of solar forcing is not tightly constrained prior to about 1960, and the total aerosol forcing and it’s variation in time is uncertain. But C&W’s specific complaint is that the attribution studies used in AR4 used solar forcing that was too large compared to more recent studies. However, reducing any warming trend associated with solar actually makes the attribution statement more likely which somewhat undercuts their point.

With respect to aerosols, the key thing to remember that regardless of the magnitude of the change, the sign of the forcing is almost certainly negative (i.e. the net aerosol effect has been one of cooling). The dominant anthropogenic aerosols are sulphates (derived from the SO2 emitted during the burning of sulphur-containing fossil fuels), which are reflective, and hence cooling. Other aerosols (black carbon, organic carbon, nitrates) are more uncertain, but have a net effect that is smaller.

Now, the statement in AR4 specifically states that the effect of greenhouse gases is more than half of the observed trend, which is actually independent of the effects of aerosols. But with the high probability of aerosols being a net cooling, this increases the ratio of the GHG-driven trends to the actual forced trend.

The final issue is whether the internal variability of the system on multi-decadal timescales has been properly characterised. For instance, it is possible that all the models grossly underestimate the internal variability, in which case any expected trend due to GHGs would be drowned out in the noise. But there is no positive evidence for this at all – as Hegerl et al point out, the estimates of multi-decadal variability in the models and observational records all overlap within their (substantial) uncertainties (arising from the shortness of the record, and the difficulty in estimating internal variability in the presence of multiple forcings). So while it is conceivable be that there is a bias, it is currently undetectable, which implies it can’t be that large.

In summary then, the IPCC AR4 statement was a fair, even conservative, assessment. There is an unfortunate tendency to reify the particular statements made by IPCC, since there were clearly other correct statements that could have been made. For instance, it might well have been worthwhile to add a statement about the likely range of the anthropogenic trends (i.e 80-120% of the actual trend or similar), so that a better picture of the appropriate distribution could be given (see Huber and Knutti, 2011) for examples). But claims that the statement was unsupported, or that it demonstrated that IPCC was ignoring uncertainty are simply untenable.

The next iteration (IPCC AR5) is now underway, but given the early results of the CMIP5 models (which are on the whole very similar, as discussed at fall AGU), and more recent literature on this issue (see refs below), I see no reasons in the recent literature why the conclusions in AR5 will be much different. But if anyone still finds the assessment confusing, they have an opportunity to make their points via the IPCC review process, and the resulting conclusions will likely be clearer because of them.

160 Responses to "The AR4 attribution statement"