Several dynamical mechanisms for this have been proposed recently. Francis and Vavrus (GRL 2012) argued that a reduction of the north-south temperature gradient would cause weaker zonal winds (winds blowing west to east) and therefore a slower eastward propagation of Rossby waves. A change in Rossby wave propagation has not yet been detected (Barnes 2013) but this does not mean that it will not change in the future. Slowly-traveling waves (or quasi-stationary waves) would lead to more persistent and therefore more extreme weather. Petoukhov et al (2013) actually showed that several recent high-impact extremes, both heat waves and flooding events, were associated with high-amplitude quasi-stationary waves. END_OF_DOCUMENT_TOKEN_TO_BE_REPLACED

Guest post by Jared Rennie, Cooperative Institute for Climate and Satellites, North Carolina on behalf of the databank working group of the International Surface Temperature Initiative

In the 21st Century, when multi-billion dollar decisions are being made to mitigate and adapt to climate change, society rightly expects openness and transparency in climate science to enable a greater understanding of how climate has changed and how it will continue to change. Arguably the very foundation of our understanding is the observational record. Today a new set of fundamental holdings of land surface air temperature records stretching back deep into the 19th Century has been released as a result of several years of effort by a multinational group of scientists.

The International Surface Temperature Initiative (ISTI) was launched by an international and multi-disciplinary group of scientists in 2010 to improve understanding of the Earth’s climate from the global to local scale. The Databank Working Group, under the leadership of NOAA’s National Climatic Data Center (NCDC), has produced an innovative data holding that largely leverages off existing data sources, but also incorporates many previously unavailable sources of surface air temperature. This data holding provides users a way to better track the origin of the data from its collection through its integration. By providing the data in various stages that lead to the integrated product, by including data origin tracking flags with information on each observation, and by providing the software used to process all observations, the processes involved in creating the observed fundamental climate record are completely open and transparent to the extent humanly possible. 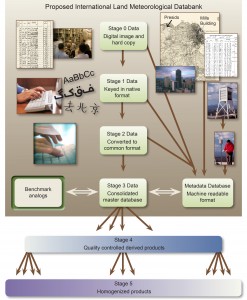 The databank includes six data Stages, starting from the original observation to the final quality controlled and bias corrected product (Figure 1). The databank begins at Stage Zero holdings, which contain scanned images of digital observations in their original form. These images are hosted on the databank server when third party hosting is not possible. Stage One contains digitized data, in its native format, provided by the contributor. No effort is required on their part to convert the data into any other format. This reduces the possibility that errors could occur during translation. We collated over 50 sources ranging from single station records to holdings of several tens of thousands of stations.

Once data are submitted as Stage One, all data are converted into a common Stage Two format. In addition, data provenance flags are added to every observation to provide a history of that particular observation. Stage Two files are maintained in ASCII format, and the code to convert all the sources is provided. After collection and conversion to a common format, the data are then merged into a single, comprehensive Stage Three dataset. The algorithm that performs the merging is described below. Development of the merged dataset is followed by quality control and homogeneity adjustments (Stage Four and Five, respectively). These last two stages are not the responsibility of Databank Working Group, see the discussion of broader context below.

The following is an overview of the process in which individual Stage Two sources are combined to form a comprehensive Stage Three dataset. A more detailed description can be found in a manuscript accepted and published by Geoscience Data Journal (Rennie et al., 2014).

The algorithm attempts to mimic the decisions an expert analyst would make manually. Given the fractured nature of historical data stewardship many sources will inevitably contain records for the same station and it is necessary to create a process for identifying and removing duplicate stations, merging some sources to produce a longer station record, and in other cases determining when a station should be brought in as a new distinct record.

The merge process is accomplished in an iterative fashion, starting from the highest priority data source (target) and running progressively through the other sources (candidates). A source hierarchy has been established which prioritizes datasets that have better data provenance, extensive metadata, and long, consistent periods of record. In addition it prioritizes holdings derived from daily data to allow consistency between daily holdings and monthly holdings. Every candidate station read in is compared to all target stations, and one of three possible decisions is made. First, when a station match is found, the candidate station is merged with the target station. Second, if the candidate station is determined to be unique it is added to the target dataset as a new station. Third, the available information is insufficient, conflicting, or ambiguous, and the candidate station is withheld.

Stations are first compared through their metadata to identify matching stations. Four tests are applied: geographic distance, height distance, station name similarity, and when the data record began. Non-missing metrics are then combined to create a metadata metric and it is determined whether to move on to data comparisons, or to withhold the candidate station. If a data comparison is deemed necessary, overlapping data between the target and candidate station is tested for goodness-of-fit using the Index of Agreement (IA). At least five years of overlap are required for a comparison to be made. A lookup table is used to provide two data metrics, the probability of station match (H1) and the probability of station uniqueness (H2). These are then combined with the metadata metric to create posterior metrics of station match and uniqueness. These are used to determine if the station is merged, added as unique, or withheld.

The integrated data holding recommended and endorsed by ISTI contains over 32,000 global stations (Figure 2), over four times as many stations as GHCN-M version 3. Although station coverage varies spatially and temporally, there are adequate stations with decadal and century periods of record at local, regional, and global scales. Since 1850, there consistently are more stations in the recommended merge than GHCN-M (Figure 3). In GHCN-M version 3, there was a significant drop in stations in 1990 reflecting the dependency on the decadal World Weather Records collection as a source, which is ameliorated by many of the new sources which can be updated much more rapidly and will enable better real-time monitoring. 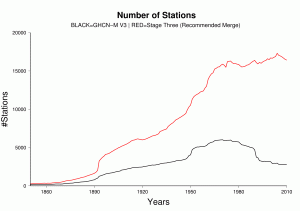 Many thresholds are used in the merge and can be set by the user before running the merge program. Changing these thresholds can significantly alter the overall result of the program. Changes will also occur when the source priority hierarchy is altered. In order to characterize the uncertainty associated with the merge parameters, seven different variants of the Stage Three product were developed alongside the recommended merge. This uncertainty reflects the importance of data rescue. While a major effort has been undertaken through this initiative, more can be done to include areas that are lacking on both spatial and temporal scales, or lacking maximum and minimum temperature data.

Version 1.0.0 of the Global Land Surface Databank has been released and data are provided from a primary ftp site hosted by the Global Observing Systems Information Center (GOSIC) and World Data Center A at NOAA NCDC. The Stage Three dataset has multiple formats, including a format approved by ISTI, a format similar to GHCN-M, and netCDF files adhering to the Climate and Forecast (CF) convention. The data holding is version controlled and will be updated frequently in response to newly discovered data sources and user comments.

All processing code is provided, for openness and transparency. Users are encouraged to experiment with the techniques used in these algorithms. The programs are designed to be modular, so that individuals have the option to develop and implement other methods that may be more robust than described here. We will remain open to releases of new versions should such techniques be constructed and verified.

ISTI’s online directory provides further details on the merging process and other aspects associated with the full development of the databank as well as all of the data and processing code.

We are always looking to increase the completeness and provenance of the holdings. Data submissions are always welcome and strongly encouraged. If you have a lead on a new data source, please contact data.submission@surfacetemperatures.org with any information which may be useful.

It is important to stress that the databank is a release of fundamental data holdings – holdings which contain myriad non-climatic artefacts arising from instrument changes, siting changes, time of observation changes etc. To gain maximum value from these improved holdings it is imperative that as a global community we now analyze them in multiple distinct ways to ascertain better estimates of the true evolution of surface temperatures locally, regionally, and globally. Interested analysts are strongly encouraged to develop innovative approaches to the problem.

To help ascertain what works and what doesn’t the benchmarking working group are developing and will soon release a set of analogs to the databank. These will share the space and time sampling of the holdings but contain a set of known (to the originators) data issues that require removing. When analysts apply their methods to the analogs we can infer something meaningful about their methods. Further details are available in a discussion paper under peer review [Willett et al., submitted].