You are here: Home / Climate Science / Arctic and Antarctic / Millennia of sea-level change

How has global sea level changed in the past millennia? And how will it change in this century and in the coming millennia? What part do humans play? Several new papers provide new insights.

2500 years of past sea level variations

This week, a paper will appear in the Proceedings of the National Academy of Sciences (PNAS) with the first global statistical analysis of numerous individual studies of the history of sea level over the last 2500 years (Kopp et al. 2016 – I am one of the authors). Such data on past sea level changes before the start of tide gauge measurements can be obtained from drill cores in coastal sediments. By now there are enough local data curves from different parts of the world to create a global sea level curve.

Let’s right away look at the main result. The new global sea level history looks like this:

Fig. 1 Reconstruction of the global sea-level evolution based on proxy data from different parts of the world. The red line at the end (not included in the paper) illustrates the further global increase since 2000 by 5-6 cm from satellite data.

To understand this curve we need to know one thing. There is a remaining uncertainty in the linear trend over the whole period. This is because in many places of the world slow processes, especially continuing land uplift or subsidence after the end of the last Ice Age, cause a sea-level trend uncertainty (because land subsidence is not the same as sea level rise, this needs to be subtracted). It is therefore the fluctuations around the linear trend which are the most robust aspect of these data. The uncertainty in the trend is small, only 0.2 mm/year (the current sea level rise is 3 mm/year). But even a small steady trend of 0.2 mm/year amounts to half a meter during 2500 years. For the graph above, this means that the correct curve could be “tilted” a little to the left or right. This would, for example, change the relative global sea level in 2000 compared to the Middle Ages – this relative height does not belong to the robust results, as stated in the paper.

In contrast, a robust result is the fact that sea level has risen more during the 20th century than during any previous century. (This statement is true regardless of an additive trend.) A good way to show this is the following graph. 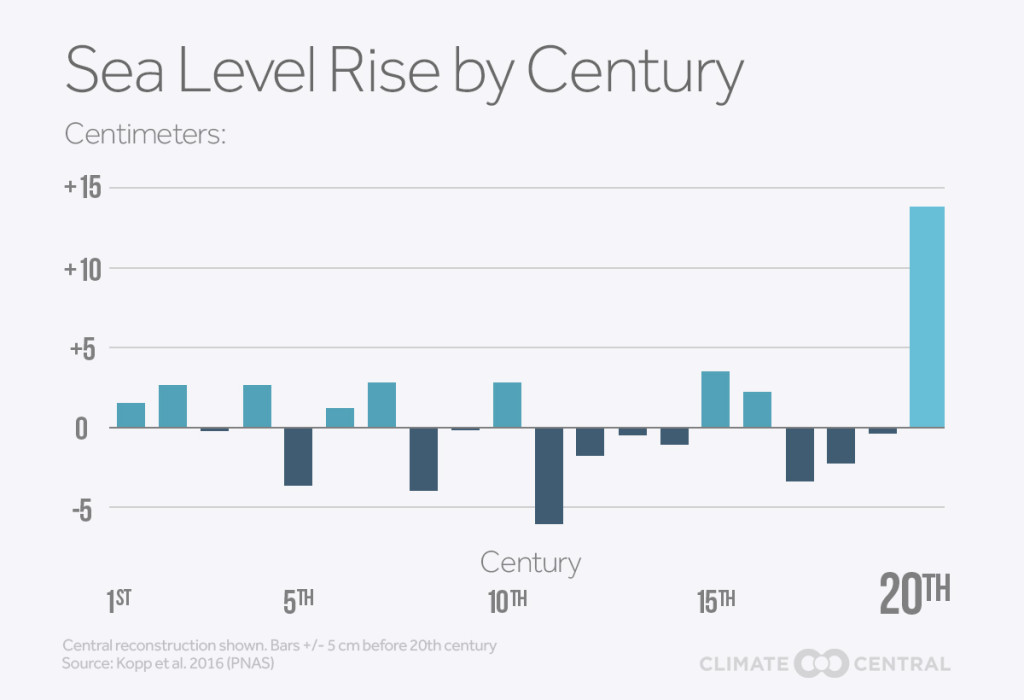 Fig. 2 Sea-level change during each of the twenty centuries of the Common Era (Graph: Climate Central.)

The fact that the rise in the 20th century is so large is a logical physical consequence of man-made global warming. This is melting continental ice and thus adds extra water to the oceans. In addition, as the sea water warms up it expands. (A new study has also just been published about the size of individual contributions derived from satellite data: Rietbroek et al 2016).

The paleoclimatic data reaching back for millennia can be used to better separate the natural variations in sea level and the human impact. With near-certainty at least half of the rise in the 20th century is caused by humans; possibly all of it. From natural causes alone sea level might also have fallen in the 20th century, instead of the observed rise by close to 15 centimeters.

What will happen in the 21st century?

The data from the past can also be used for future projections, using a so-called semi-empirical model calibrated with the historically observed relationship between temperature and sea level. With the new data, this results in a projected increase in the 21st century of 24-131 cm, depending on our emissions and thus on the extent of global warming.

This brings us to a second study, also published this week in PNAS (Mengel et al. 2016). In this paper a new method of sea-level projections is developed. It is not based on complex models, but also on simple semi-empirical equations. But not for sea level as a whole but for the individual causes of sea-level changes: thermal expansion of sea water, melting of glaciers and mass loss of the large ice sheets. These equations are calibrated based on data from the past and then extrapolated to a warmer future. It is a kind of hybrid between the semi-empirical and the process-based approach (favored by the IPCC) to sea-level projections. The following table compares the projections of the various methods.

Table 1 Global sea level rise in centimeters over the 21st century according to various studies for different emission scenarios. The first scenario (RCP 2.6) assumes successful climate policies limiting global warming to about 2°C; the last (RCP 8.5), however, unabated emissions and heating by around 5°C. (The ranges indicate the 90 percent confidence intervals except for the IPCC, which only provided a 66 percent confidence interval.)

The final column shows the results of an expert survey among 90 distinguished sea-level researchers (Horton et al. 2014). The projections on the basis of very different data and models thus yield very similar results, which speaks for their robustness. With one important caveat, however: the possibility of ice sheet instability, which for many years has been hanging like a shadow over all sea-level projections. While we have a pretty good handle on melting at the surface of the ice, the physics of the sliding of ice into the ocean is not fully understood and may still bring surprises. I consider it possible that in this way the two big ice sheets may contribute more sea-level rise by 2100 than suggested by the upper end of the ranges estimated by Mengel et al. for the solid ice discharge, which is 15 cm from Greenland and 19 cm from Antarctica. (The biggest contributions to their 131 cm upper end are 52 cm from Greenland surface melt and 45 cm from thermal expansion of ocean water.)

This concern is reinforced strongly by two further new papers, also appearing in PNAS this week, by Gasson et al. and by Levy et al.. These papers look at the stability of the Antarctic Ice Sheet during the early to mid Miocene, between 23 and 14 million years ago. What is most relevant here is the advances in modelling the Antarctic ice sheet by including new mechanisms describing the fracturing of ice shelves and the breakup of large ice cliffs. The improved ice sheet model is able to capture the highly variable Antarctic ice volume during the Miocene; the bad news is that it suggests the Antarctic Ice Sheet can decay more rapidly than previously thought.

Fig. 3 The last 2500 years of sea level together with the projections of Kopp et al. for the 21st century. Future rise will dwarf natural sea-level variations of previous millennia.

One question I was asked by a journalist was how the new results compare with our previous study (Kemp et al. 2011), which reconstructed the last two millennia of sea level in North Carolina based on cores from the Outer Banks. Sea level changes in one place can of course differ substantially from the global sea level history. In that paper we therefore estimated the expected size of these deviations on the basis of known physical processes, and came to the conclusion:

This analysis suggests that our data can be expected to track global mean sea level within about ±10 cm over the past two millennia.

The graph below shows a direct comparison of the new global and the former regional curves. (To allow a fair comparison, the uncertainty about a linear background rate discussed above was treated in the same manner in both curves, namely by removing the linear trend over the pre-industrial period AD 0-1800.) 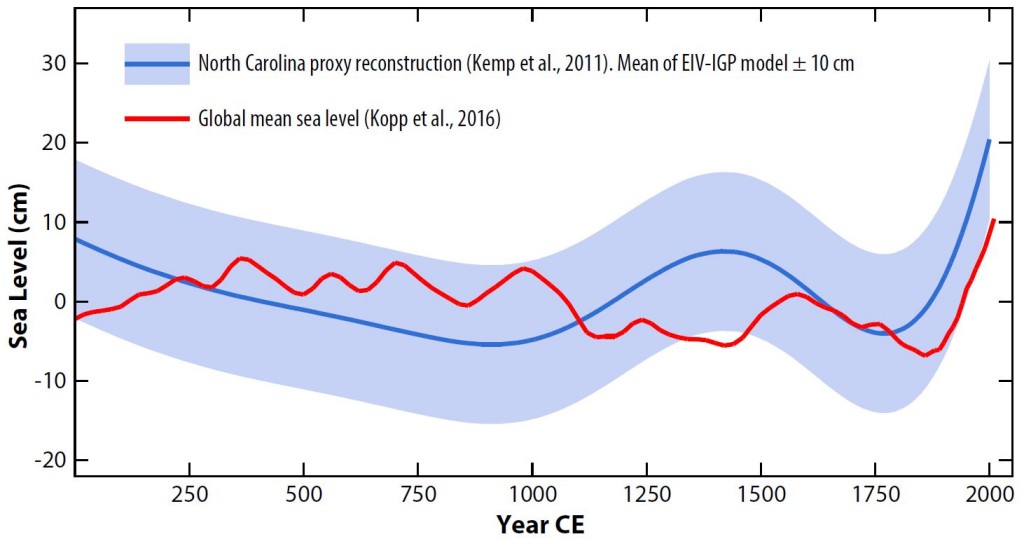 As we see, our assessment wasn’t bad at all.

Another recent paper, by 22 renowned researchers in Nature Climate Change (Clark et al. 2016), discusses the long-term sea level rise which we will cause by our emissions of the coming decades. Largely because of the slow response of the large ice sheets on Greenland and Antarctica to global warming, the sea will continue to rise for at least ten thousand years even after global warming was stopped – longer than the history of human civilization. The reason is that the lifetime of CO2 in the atmosphere is very long – even millennia after we will have stopped burning fossil fuels, the CO2 content of the atmosphere and the global temperature will continue to be higher than now, and ice will continue to melt. Even if we limit global warming to 2°C, the likely end result will be a sea-level rise of around 25 meters. 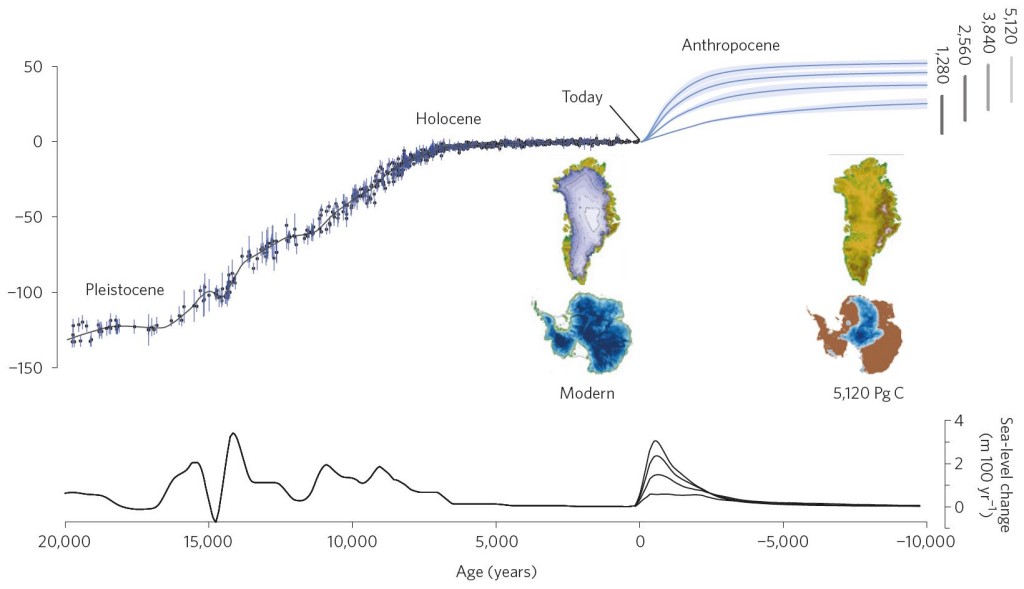 Fig. 5 From the Ice Age to the Anthropocene: the last 20,000 and the next 10,000 years of sea level, by Clark et al. 2016. The vertical scale is measured here not in cm but in meters: at the height of the last Ice Age, at the start of the curve, global sea level was about 125 meters lower than today. Due to our greenhouse gas emissions we are currently setting in motion a sea-level rise of 25 to 50 meters above present levels. The small inset maps show the ice cover on Greenland and Antarctica. The lower curves give the rate of sea-level rise in meters per century.

This expected large sea-level rise does of course not surprise us paleoclimatologists, given that in earlier warm periods of Earth’s history sea level has been many meters higher than now due to the diminished continental ice cover (see the recent review by Dutton et al. 2015 in Science).

I have often emphasized the inexorable long-term effects of sea level rise in my lectures and articles over the years. Often I was told that people don’t care about what will happen in thousands of years – they are at best interested in the lifetime of their children and grandchildren. Would you agree with that? I would hope that we do care how future generations will see the legacy that we leave them.

Washington Post: Seas are now rising faster than they have in 2,800 years, scientists say

Associated Press: Seas are rising way faster than any time in past 2,800 years

The Independent: Sea levels ‘could rise by more than a metre’ if global warming is not tackled, says new study

99 Responses to "Millennia of sea-level change"