You are here: Home / Climate Science / Record heat despite a cold sun

Global temperature goes from heat record to heat record, yet the sun is at its dimmest for half a century.

For a while, 2010 was the hottest year on record globally. But then it got overtopped by 2014. And 2014 was beaten again by 2015. And now 2016 is so warm that it is certain to be once again a record year. Three record years in a row – that is unprecedented even in all those decades of global warming.

Strangely, one aspect of this gets barely mentioned: all those heat records occur despite a cold sun (Figs. 1 and 2). The last solar minimum (2008-2010) was the lowest since at least 1950, while the last solar maximum (2013-2015) can hardly be described as such. This is shown, among others, by the sunspot data (Fig. 1) as well as measurements of the solar luminosity from satellites (Fig. 2). Other indicators of solar activity indicate cooling as well (Lockwood and Fröhlich, Proc. Royal Society 2007).

Fig. 1 Time evolution of global temperature, CO2 concentration and solar activity. Temperature and CO2 are scaled relative to each other according to the physically expected CO2 effect on climate (i.e. the best estimate of transient climate sensitivity). The amplitude of the solar curve is scaled to correspond to the observed correlation of solar and temperature data. (Details are explained here.) You can generate and adapt this graph to your taste here, where you can also copy a code with which the graph can be embedded as a widget on your own website (as on my home page). Thus it will be automatically updated each year with the latest data. Thanks to our reader Bernd Herd who programmed this.

Fig. 2 Time series of the Sun’s luminosity from the World Radiation Center in Davos.

As climate scientists we are by no means surprised at this development, as there has been clear evidence that the variations of the sun’s activity have played a completely subordinate role in climate change over the last 65 years. We’ve covered this issue many times, e.g. here, here and here. Global warming is driven by greenhouse gases, which is a long-standing consensus in science.

The current IPCC report, for example, limits the natural contribution to global warming since 1950 to less than plus or minus 0.1 ° C (it might have been negative e.g. because of the fading sun). However, some unsupported claims by “climate skeptics” about the importance of solar variability are now clearly falsified.

Climate skeptics have repeatedly predicted an imminent global cooling because of the weak sun. Attributing global warming to the sun has become untenable, because solar activity has not increased for the last 65 years. It has been essentially constant, except for the well-known 11-year Schwabe cycle (which also has little effect on global temperature) and a slight downward trend .

The excuse of the skeptics here is usually that global warming is a time-delayed reaction to an increase in solar activity before 1950. The basic idea is not entirely wrong: the climate system has a certain inertia. If the solar luminosity were to be increased in a sudden step, the temperature would not rise immediately, as it would take a while to heat up the oceans. This inertia effect can be quantified with the help of model simulations. Caldeira and Myhrvold (ERL 2013) have shown that 60% of the temperature reaction occurs within the first 20 years.

However, around 80% of global warming since the 19th century has only taken place after 1970. It is therefore unthinkable that the slight and gradual increase in solar activity before 1950 could have contributed significantly to the strong warming since the 1970s. Further evidence for this is the comparison of temperatures of land and sea. Everyone knows: when the sun rises in the morning, it takes only a few hours (certainly not decades) to heat the air strongly. Over 90% of the thermal inertia resides in the ocean, while the air over land quickly heats up. If the global warming since 1970 were a delayed response to a previous increase in solar luminosity, then we would now observe above all a catch-up warming of the oceans. The opposite is the case: the continents heat up more quickly and the ocean temperatures are lagging behind.

Another point: even if solar variability, for some magical reason, had a noticeable warming effect over the last decades, this would have to come in addition to the CO2-effect and would not call it into question. The warming effect of CO2 on climate is physically well-understood, and the sensitivity of global temperature to CO2 is independently confirmed by paleoclimatic data, see e.g. Rohling et al. 2012 or the brand-new paper by Friedrich et al. 2016 (here is a nice write-up on this paper from Peter Hannam in the Sydney Morning Herald).

Some “climate skeptics” have been courageous enough to make forecasts. A notable example is former German energy manager Fritz Vahrenholt (who once claimed in an interview that Greenland was nearly free of ice in the Middle Ages). In 2010 Vahrenholt (who was then in a leading position with the energy utility RWE, Europe’s largest CO2 emitter) published a newspaper article with the beautiful sentence:

The winters are becoming noticeably harsher. That worries all those who are concerned about why global warming is obviously pausing.

(Which it was not, but never mind.) He also knew the cause:

Of course, it’s the sun, stupid!

In his 2012 book, Die kalte Sonne (co-written with Sebastian Lüning also from RWE; literally the title translates as The Cold Sun) he then presented his own forecast for the global temperature evolution until 2030. In Figure 3 we compare this to measured data. No comment required. 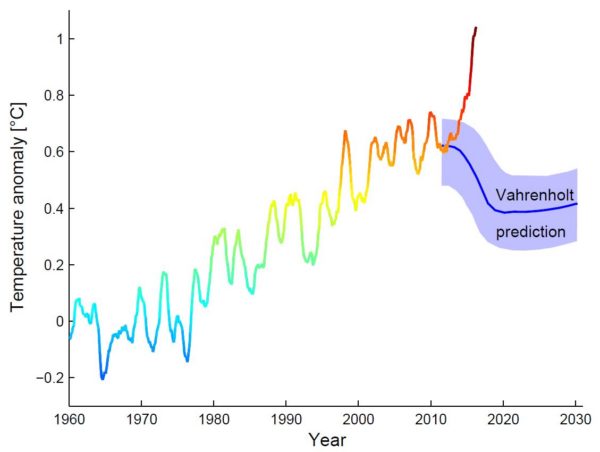 Figure 3 Measurements of global temperature (NASA GISTEMP, moving average over 12 months) compared to the forecast for global temperature by 2030 by Vahrenholt and Lüning, after Figure 73 of their book. (Image by Stefan Rahmstorf, Creative Commons BY-SA 4.0.)

Vahrenholt and Lüning’s book does have one clear merit, however, and that is its title. The Cold Sun nicely sums up the fact that the sun is currently weak – good to know at a time of unprecedented global warming!

p.s. To compare to Vahrenholt’s forecast, here’s a comparison of earlier model projections of global temperature for the IPCC (prediction with the CMIP3 model ensemble used in the 4th IPCC assessment report, published in 2007) with the actual changes in temperature (the four colored curves). Graph by Gavin. (The agreement with the most recent set of models (CMIP5) was recently discussed here by Gavin.) 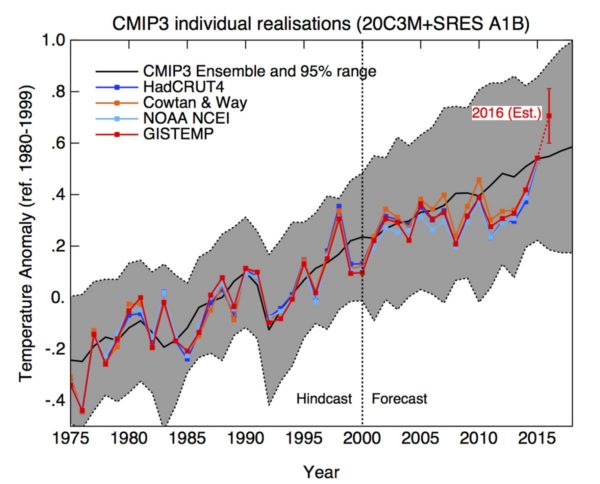 30 Responses to "Record heat despite a cold sun"