The complete WG1 IPCC 4th Assessment report (AR4) is now available online. It’s missing the index and some supplemental data, but all should be available by May 7.

Over the next few weeks we’ll try and go through the report chapter by chapter, but since this is likely to the key reference for a number of years, we can take a little time to do it properly. Happy reading!

When I give talks about climate change, the question that comes up most frequently is this: “Doesn’t the relationship between CO2 and temperature in the ice core record show that temperature drives CO2, not the other way round?”

On the face of it, it sounds like a reasonable question. It is no surprise that it comes up because it is one of the most popular claims made by the global warming deniers. It got a particularly high profile airing a couple of weeks ago, when congressman Joe Barton brought it up to try to discredit Al Gore’s congressional testimony. Barton said:

In your movie, you display a timeline of temperature and compared to CO2 levels over a 600,000-year period as reconstructed from ice core samples. You indicate that this is conclusive proof of the link of increased CO2 emissions and global warming. A closer examination of these facts reveals something entirely different. I have an article from Science magazine which I will put into the record at the appropriate time that explains that historically, a rise in CO2 concentrations did not precede a rise in temperatures, but actually lagged temperature by 200 to 1,000 years. CO2 levels went up after the temperature rose. The temperature appears to drive CO2, not vice versa. On this point, Mr. Vice President, you’re not just off a little. You’re totally wrong.

Of course, those who’ve been paying attention will recognize that Gore is not wrong at all. This subject has been very well addressed in numerous places. Indeed, guest contributor Jeff Severinghaus addressed this in one of our very first RealClimate posts, way back in 2004. Still, the question does keep coming up, and Jeff recently received a letter asking about this. His exchange with the letter writer is reproduced in full at the end of this post. Below is my own take on the subject.

END_OF_DOCUMENT_TOKEN_TO_BE_REPLACED

A recent paper by Vecchi and Soden (preprint) published in the journal Geophysical Research Letters has been widely touted in the news (and some egregiously bad editorials), and the blogosphere as suggesting that increased vertical wind shear associated with tropical circulation changes may offset any tendencies for increased hurricane activity in the tropical Atlantic due to warming oceans. Some have even gone so far as to state that this study proves that recent trends in hurricane activity are part of a natural cycle. Most of this is just ‘spin’ (pun intended), but as usual, the real story is a little more nuanced.
END_OF_DOCUMENT_TOKEN_TO_BE_REPLACED

A lot has been made of a paper (Lyman et al, 2006) that appeared last year that claimed that the oceans had, contrary to expectation, cooled over the period 2003-2005. At the time, we (correctly) pointed out that this result was going to be hard to reconcile with continued increases in sea level rise (driven in large part by thermal expansion effects), and that there may still be issues with way that the new ARGO floats were being incorporated into the ocean measurement network. Now it seems as if there is a problem in the data and in the latest analysis, the cooling has disappeared.
END_OF_DOCUMENT_TOKEN_TO_BE_REPLACED

As part of a much larger discussion on Learning to live with Global Warming in Newsweek recently, the editors gave some space for Richard Lindzen to give his standard ‘it’s no big deal’ opinion. While we disagree, we have no beef with serious discussions of the costs and benefits of various courses of action and on the need for adaption to the climate change that is already locked in.

However, Lindzen’s piece is not a serious discussion.
END_OF_DOCUMENT_TOKEN_TO_BE_REPLACED

A lot of what gets discussed here in relation to the greenhouse effect is relatively simple, and yet can be confusing to the lay reader. A useful way of demonstrating that simplicity is to use a stripped down mathematical model that is complex enough to include some interesting physics, but simple enough so that you can just write down the answer. This is the staple of most textbooks on the subject, but there are questions that arise in discussions here that don’t ever get addressed in most textbooks. Yet simple models can be useful there too.

I’ll try and cover a few ‘greenhouse’ issues that come up in multiple contexts in the climate debate. Why does ‘radiative forcing’ work as method for comparing different physical impacts on the climate, and why you can’t calculate climate sensitivity just by looking at the surface energy budget. There will be mathematics, but hopefully it won’t be too painful.
END_OF_DOCUMENT_TOKEN_TO_BE_REPLACED

The release of the IPCC Working Group II summary report (on climate change impacts) lead to a large number of stories on climate change in the media and, inevitably, lots of requests for media appearances for climate scientists on the journalists’ Rolodex. On the same day, there was a short article in Science on the ‘framing’ of science communication.

The Science piece, by Scibloggers Chris Mooney and Matt Nisbet, make the point that the way science is expressed in public makes a difference to how it is received. So much, so uncontroversial. However, it generated some trenchant counter–arguments, (and counter–counter–arguments), possibly because they start off criticising a bit of a strawman ‘scientist’ who thinks that ‘if only laypeople better understood technical complexities… controversies would subside’. It’s certainly possible that such people exist, however, they are unlikely to be found among the scientists who are active in trying to communicate to the public. However, instead of arguing about this in a rather abstract way, I thought I’d illustrate the issue by discussing three interviews I did last Thursday and Friday in relation to the IPCC WG II release.

END_OF_DOCUMENT_TOKEN_TO_BE_REPLACED

“But Figen, humid air feels oppressive, heavy!” students told me, almost in unison. A very treasured moment indeed. I just got a glimpse of probably a long held misconception: water vapor is heavier than dry air. So, we took out our periodic tables and calculators, and went on to calculate the molecular weight of H2O and how it compares to that of N2 and O2 (most of the atmosphere). Happy that I corrected a major fallacy, I didn’t see the rest coming.

Apparently, there are many other sinister fallacies lurking just underneath the surface of the heavy wet air idea. One student asked “is the formula for water vapor the same as for liquid water?” and was astonished to find out that it is always H2O regardless of phase, even in ice! I said “we like to keep things simple in science” and a couple of ladies giggled “as if!”

Then another admitted that he always thought water split into H2 and O2 upon evaporation which would make wet air heavy. Another student answered him with “No way man. When water vapor condenses to liquid, the molecules get bigger which is why liquid water is heavier than vapor.” So we had a long discussion about molecular dynamics of evaporation and condensation. Also, once I helped the students realize the stark contrast between what they think they know (water vapor is heavy) and something else they know from the Weather Channel (low pressure means rain), the cognitive dissonance (the psychological tension created by conflicting knowledge) drove them to question both “bits of knowledge” and to adjust their ideas. By the end of the hour, they were saying this is SOOO weird, humid air rises. Who knew!
END_OF_DOCUMENT_TOKEN_TO_BE_REPLACED 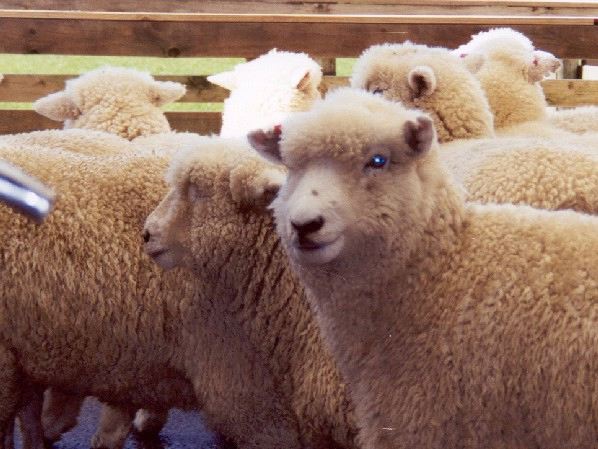 The already-reeling "consensus" supposedly linking climate change to CO2 is about to receive its final coup-de-grace from a remarkable new result announced in a press conference today by Dr. Ewe Noh-Watt of the New Zealand Institute of Veterinary Climatology [1]. Noh-Watt and his co-workers, describing work funded by a generous grant from the Veterinary Climate Science Coalition, declared "We have seen the future of climate — and it is Sheep." Prof. Jean-Belliere Poisson d’Avril, star student of Claude Allegro Molto-Troppo (discoverer of the Tropposphere) reacted with the words, "Parbleu! C’est la meilleure chose depuis les baguettes tranchées!"

The hypothesis begins with the simple observation that most sheep are white, and therefore have a higher albedo than the land on which they typically graze (see figure below). This effect is confirmed by the recent Sheep Radiation Budget Experiment. The next step in the chain of logic is to note that the sheep population of New Zealand has plummeted in recent years. The resulting decrease in albedo leads to an increase in absorbed Solar radiation, thus warming the planet. The Sheep Albedo hypothesis draws some inspiration from the earlier work of Squeak and Diddlesworth [2] on the effect of the ptarmigan population on the energy balance of the Laurentide ice sheet. Noh-Watt hastens to emphasize that the two hypotheses are quite distinct, since the species of ptarmigan involved in the Squeak-Diddlesworth effect is now extinct.