You are here: Home / Climate Science / Far out in North Carolina

The extensive salt marshes on the Outer Banks of Carolina offer ideal conditions for unravelling the mysteries of sea level change during past centuries. Here is a short report from our field work there – plus some comments on strange North Carolina politics as well as two related new papers published today in Nature Climate Change. 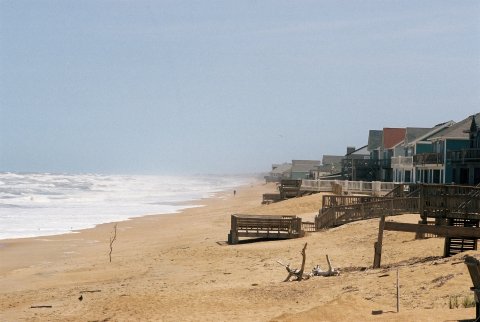 The Outer Banks of Carolina are particularly vulnerable to coastal erosion and sea-level rise, partly because the land is subsiding and the banks are naturally moving landward. On the ocean front, land is continually being lost.

At 11.20 AM we get a walky-talky call from the research vessel Stanley Riggs which anchors a bit offshore from us: a few meters behind us is a shark in the water they say. They’ve been observing it through their binoculars. We haven’t noticed a thing and turn around, but only the student Ray catches a glimpse of the fin before it disappears. We’re standing on a bit of peat surrounded on three sides by water, drilling a core. Sharks don’t bother us – but the people on the ship are worried about our divers who plan to go in the water shortly. We don’t see the shark again – only little snakes elegantly gliding past through the water, heads above the surface, and some crabs, a popular local delicacy. 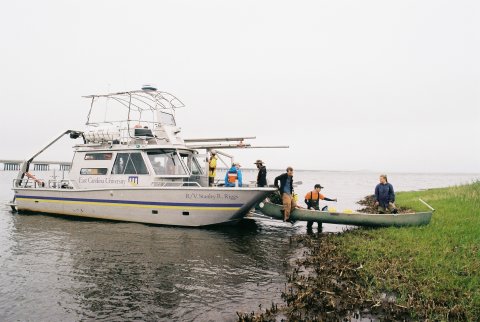 To us as onshore crew, alligators would be far more interesting than sharks. Last week, not far from one of the study sites a man was injured by an alligator. My colleagues reassure me: alligators are nothing to worry about, as long as you can run faster than the slowest person in the group. But everything looks as peaceful as it can be now. The sun glitters on the lagoon, every now and then a group of pelicans patrols over our heads and convective clouds are billowing near the horizon. Sometimes we hear thunder rolling in the distance, but it stays dry all day. What a contrast to the previous day! A cold wind and constant rain bothered us and a series of technical failures meant that we did not even bring a useable core home. A dozen people worked a whole day in vain. (No hint that day of the fact that this May was the warmest on record in the Northern Hemisphere!) 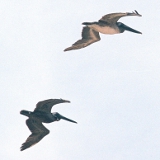 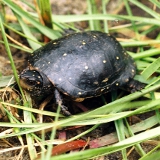 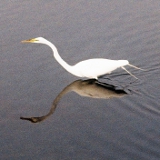 The day I arrived on the Outer Banks I’d been greeted with news of a 50:50 chance of a tropical storm developing offshore. The same evening the first tropical storm of the season was called by the National Hurricane Center: Alberto. In mid-May – the hurricane season officially only starts in June (it turned out to be only the third May on record with two tropical storms in the Atlantic). The Outer Banks are very exposed. Several times in the last decades a hurricane caused a break in the barrier island and washed away the only road connection to the mainland. Luckily, Alberto turned offshore and passed far out at sea without bothering us. 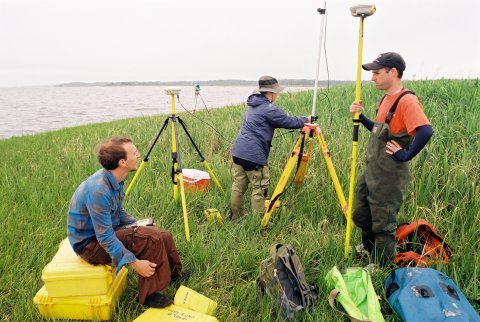 Andy Kemp (on right) with students Ray and Hanna.

We’re here because of the several metres thick peat layer which has accumulated during the past millennia behind the Outer Banks. The land here is still sinking since the end of the last Ice Age, because it is located on the glacial forebulge: a zone around the edges of the glacial ice sheets that was pushed up when the ice load was pushing down adjacent lands. So instead of getting post-glacial uplift it suffers from post-glacial subsidence. The subsidence has led to a continuous sea-level rise relative to the land of around one millimetre per year. The salt marsh is able to keep up with this rise by accumulating sediments and building up peat, about a metre per millennium. This provides a unique opportunity to reconstruct the speed of relative sea-level rise – and by subtracting out the land subsidence, also the absolute sea-level changes. 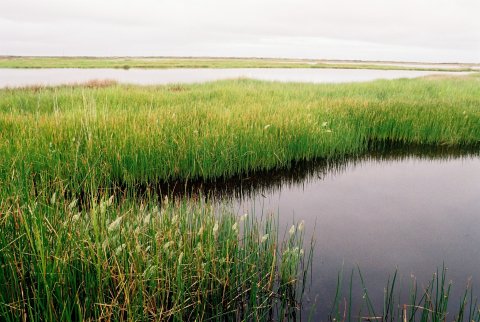 I’ve already reported here on the previous results of our collaboration with the team around Ben Horton of the University of Pennsilvania: it was possible to reconstruct sea level for the past 2,000 years and to link the variations of the last 1,000 years to the global temperature evolution (see graph in that earlier post). Now we’re here to look for even older, thicker peat. Some of the oldest peat may well have been flooded in the meantime and be sitting at the bottom of the lagoon, hence we’re also coring from aboard the research vessel run by East Carolina University. After more than a week of coring, the peat is looking promising – but only months-long efforts in the lab will show whether the new cores are suitable for reconstructing sea level. 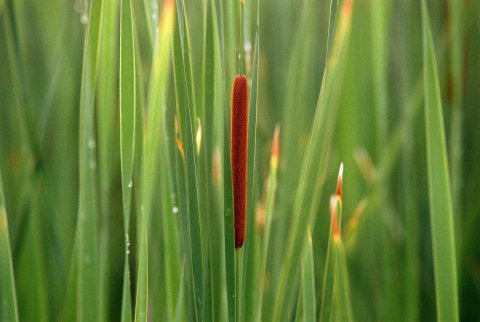 On the last day we hold a stakeholder workshop in Nag’s Head. NOAA, the funding agency, requires this type of direct discussion of the project scientists with potential users of the results, e.g. from local planning authorities. Sea-level rise is right now a hot topic in North Carolina: an interest group called NC20 has proposed a rather bizarre piece of state legislation that would ban the use in planning of scenarios of accelerated future sea-level rise (as recommended e.g. by the guidance document of the US Army Corps of Engineers, who assume a “high” scenario of 1.5 metres – about five foot – sea-level rise by the year 2100). And yes – NC20 was represented at our stakeholder workshop. Here is a leaflet that they distribute. The group tries to discredit the credibility of science by propagating the myth that climate science predicted global cooling in the 1970s. In truth this cooling idea was never main-stream but a small minority view also in the 1970s. CO2-induced global warming was in fact correctly predicted in classic papers e.g. in 1972 (Sawyer in Nature) and 1975 (Broecker in Science). 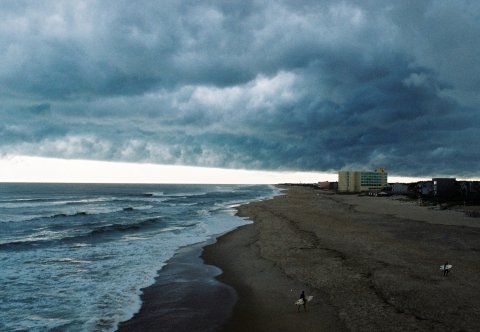 Dark clouds gather over the beach at Jennette’s Pier where we hold our stakeholder workshop. Not long after a thunderstorm strikes. The wide beach is artificial: result of a beach nourishment project for $ 36 million in the previous year. Environmentalists are critical of the beach nourishment. [All photos (c) S.R.]

Of course, global sea-level rise has already accelerated in the course of global warming (as many scientific papers have demonstrated – including the data from the peat cores in North Carolina), and will almost certainly accelerate further as the planet warms. After all, ice melts faster the warmer it gets, and the oceans also heat up faster. In other words, this law would have banned taking reality into account in planning. It was passed recently by the Senate of North Carolina, albeit with some rewording that softens up the central clause, but looks unlikely to become law this year. The Colbert Report has a rather funny comedy piece on the sea level law. This story was topped by a Senator from northern neighbour Virginia, who apparently said that “sea-level rise is a left-wing term”.

Nature Climate Change publishes two new sea-level papers today. One, by Sallenger et al., is an analysis of US tide gauge data. The main finding is that there is a “hotspot” of acceleration in sea level rise over the past sixty years on the US Atlantic coast, with the largest acceleration found between Cape Hatteras and Boston. The authors argue that this pattern is consistent with a weakening of the Atlantic overturning circulation (and hence their first reference is to our 2005 paper where we show this sea-level pattern in our model). In my opinion an intriguing possibility that warrants further investigation. There could be other causes, like interdecadal changes in the wind field.

The other paper, by Schaeffer et al. (disclosure: I am a co-author on this) estimates global sea-level rise up to the year 2300 using a semi-empirical approach. The paper exploits the observed relationship between global temperature and the rate of global sea-level rise and was calibrated using the sea-level proxy data from North Carolina for the past millennium. For the main results, see the graph below, which also includes the proxy data (click to enlarge). Ironically, it is thus the historic data from North Carolina that lead us to rather grim expectations of future sea-level rise.

More photos: see my US Atlantic Coast set on Flickr.

Update: a few links to media articles about this topic

139 Responses to "Far out in North Carolina"