With the official numbers now in 2015 is, by a substantial margin, the new record-holder, the warmest year in recorded history for both the globe and the Northern Hemisphere. The title was sadly short-lived for previous record-holder 2014. And 2016 could be yet warmer if the current global warmth persists through the year.

One might well wonder: just how likely is it that we would be seeing these sort of streaks of record-breaking temperatures if not for human-caused warming of the planet?

Precisely that question was posed by several media organizations a year ago, in the wake of the then-record 2014 temperatures. Various press accounts reported odds anywhere from 1-in-27 million to 1-in-650 million that the observed run of global temperature records (9 of the 10 warmest years and 13 of the 15 warmest years each having had occurred since 2000) might have resulted from chance alone, i.e. without any assistance from human-caused global warming.

My colleagues and I suspected the odds quoted were way too slim. The problem is that each year was treated as though it were statistically independent of neighboring years (i.e. that each year is uncorrelated with the year before it or after it), but that’s just not true. Temperatures don’t vary erratically from one year to the next. Natural variations in temperature wax and wane over a period of several years. END_OF_DOCUMENT_TOKEN_TO_BE_REPLACED

Blizzard Jonas on the US east coast has just shattered snowfall records. Both weather forecasters and climate experts have linked the high snowfall amounts to the exceptionally warm sea surface temperatures off the east coast. In this post I will examine a related question: why are sea surface temperatures so high there, as shown in the snapshot from Climate Reanalyzer below? 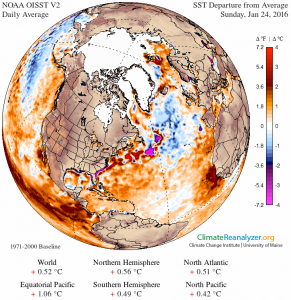 I will argue that this warmth (as well as the cold blob in the subpolar Atlantic) is partly due to a slowdown of the Atlantic Meridional Overturning Circulation (AMOC), sometimes referred to as the Gulf Stream System, in response to global warming. There are two points to this argument:

END_OF_DOCUMENT_TOKEN_TO_BE_REPLACED

To no-one’s great surprise, 2015 was clearly a record year in all the surface temperature analyses (GISTEMP, NOAA, HadCRUT4, Cowtan&Way, JMA + Berkeley Earth). There is a lot of discussion of this in the press, and on the relevant websites, so not much to add here. A few figures didn’t make it into the official announcement (audio) though…

END_OF_DOCUMENT_TOKEN_TO_BE_REPLACED

What with #AGU15 going on, and a little bit of overlap in content with Shindell (2014), NASA wasn’t particularly keen to put out a press release for the paper, but we did get a ‘web special‘ put out on Friday Dec 18th, the last day of AGU and a few days after the paper appeared online. I’ve been involved with many similar releases for papers and it is always a struggle to concisely say why a paper is interesting while not overselling it or being too technical (which is why only a small fraction of papers get press releases at all).

As we’ve previously remarked about other people’s press releases (eg. Stainforth et al or Willerslev et al), properly calibrating the aspect of a release that will get picked up by the media can be tricky, and so it proved in this case.

END_OF_DOCUMENT_TOKEN_TO_BE_REPLACED

As per usual, nuclear energy is off-topic – it’s not that it’s uninteresting, but it ends up dominating conversation to the total exclusion of everything else and just becomes repetitive and dull. Recent excursions on this topic shows what happens when we relax the moderation, so back to being strict about this. If you want to discuss this, please go somewhere else.