You are here: Home / Climate Science / The climate has always changed. What do you conclude?

(4) that we cannot stop global warming?

Not one of these answers is correct. None of these conclusions would be logical. Why not?

(1) The opposite conclusion is correct: if the climate had hardly changed during the course of the Earth’s history (despite variable incoming solar radiation and changing amounts of CO2 in the atmosphere), then we would conclude that there are strong stabilizing feedbacks in the climate system. The drastic climate changes in the history of the Earth (ice ages, hot ice-free periods) show that the climate system is sensitive to changes in the radiation budget. The measure for this sensitivity is called climate sensitivity: how much global warming will result from a CO2 doubling in the air? For the first time it was estimated by the Nobel laureate Svante Arrhenius in 1896. According to our modern knowledge this climate sensitivity is around 3°C (uncertainty ± 1°C).

Paleoclimatologists determine the climate sensitivity from data from the Earth’s history. A recent review article in Nature on this method showed “a warming around 2.2 to 4.8 °C per doubling of atmospheric CO2, which agrees with IPCC estimates”. In short: the larger past natural climate changes have been, the more vulnerable is the climate system, and the more it will react to the greenhouse gases that humans are adding to the system.

(2) Imagine there has been a forest fire. The police have extensive evidence that it was arson. They know the place where the fire began. They found traces of fire accelerants. Witnesses observed a man whose car was parked nearby. In his trunk the police finds bottles with fire accelerants, and in his house they find even more of it. He has been convicted for arson several times before. Plus some further evidence. In court, he defends himself: forest fires have always occurred lit by lightning, even before there was any man on Earth. Therefore he must be innocent. Does the argument convince you?

The evidence for the human cause of global warming is overwhelming. This is why there has been a consensus among climate researchers for a long time, and almost every scientific academy on the planet has come to the same conclusion. The most important evidence: when it gets warmer, the energy has to come from somewhere (1st law of thermodynamics). It can only come through the radiation budget of our planet. (No, Rick Perry, the energy does not come out of the ocean. To the contrary, measurements show heat is going into the oceans). The changes in this energy balance are quite well known and are shown near the front of any IPCC report – see Fig. 1. The biggest factor is the increase in CO2 concentration as well as a few other greenhouse gases, also added by human activities. The incoming solar radiation has changed just a tiny bit in comparison – since 1950, by the way, it has even decreased and thus offset a small part of the human-caused warming – hence humans have probably caused more warming than is observed (best estimate is 110% of observed warming). 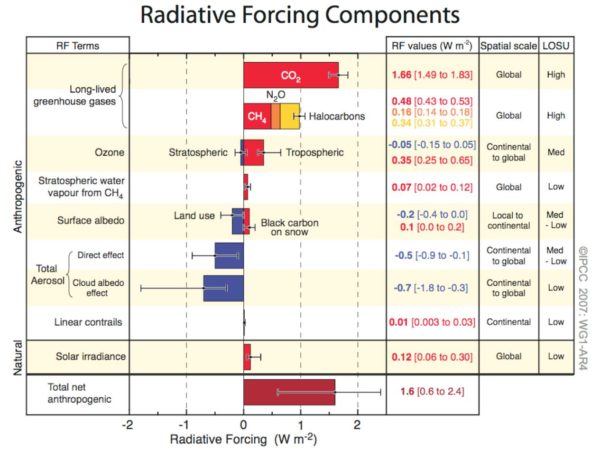 Fig. 1 Radiative forcing is the cause of global temperature changes. Red bars show warming, blue bars cooling effects. I am showing the diagram from the fourth IPCC report of 2007, because it is easier to understand than the more recent from the 5th IPCC Report of 2013, which Gavin discussed here. The overall human-caused radiative forcing, which is given here as 1.6 watts per square meter, had already risen to 2.3 watts per square meter by the year 2011 according to the 5th IPCC report. Source: IPCC report 4 Fig. SPM.2.

Overall, humans have caused an additional heating (radiative forcing) of 2.3 watts per square meter of Earth surface – as of 2011. It has increased further since.

(3) Those who can’t deny that humans are causing warming often seek refuge in the hope that the consequences might not be so bad, so we might just adapt rather than having to stop further warming. The climatic changes in Earth’s history do not support this point of view. As a result of the global warming by around 5 ° C from the last ice age 15,000 years ago to the mid-Holocene, global sea levels rose by 120 meters until 5,000 years ago! At that time hardly a problem – but for today’s humankind even a rise of two meters would be a disaster, bringing devastation to coastal cities and small island states. We still have enough ice on Greenland and Antarctica to raise the sea level around the world by 65 meters. Both ice masses are losing ice more and more quickly. The West Antarctic has probably already crossed its tipping point and is unstable. Greenland could soon follow.

By the way: the just mentioned 5°C rise within ten thousand years at the end of the ice age are among the fastest global temperature rises documented in the Earth’s history. That is 0.05 degrees per century. In the last hundred years we have caused the twentyfold rise. This pace of change overtaxes the adaptability of many ecosystems and will lead to their collapse as the warming progresses. In coral reefs this is already in progress.

The pace of the completely man-made CO2 increase (by now the CO2 concentration is higher than at any time in the past three million years) leads to a rapid acidification of the world’s oceans, because it overcomes the buffer capacity of the oceans. The last major acidification event 250 million years ago has apparently led to a massive extinction of species in the world’s oceans.

(4) Often I hear that the aims of the Paris Climate Agreement are absurd, because humans cannot stabilize the global temperature – after all, our climate changes even without human intervention. This argument is also wrong. As already mentioned, without human interference there would have been no global warming since the middle of the 20th century. If anything there would have been a slight natural cooling. The fluctuations in the sun’s activity are causing variations of 0.1 or 0.2 °C in global temperature in the last thousand years (e.g. at the Maunder Minimum of solar activity in the years 1645 to 1715). In the longer term, the astronomical Milankovitch cycles of the Earth’s orbit and the Earth’s axis dominate the natural climate changes (hence the ice ages). The shortest of these cycles has a period of 23,000 years – for the next hundred years, it practically does not matter. However, our fortune would last much longer than that: the Milankovitch cycles can be calculated over millions of years with astronomical precision (and incidentally be used to predict the beginning of all the past ice ages), and according to that, the next major climate change would arrive only in about 50,000 years. Namely the next ice age.

So if we weren’t doing something really stupid, we could benefit from another 50,000 years with a stable climate. Nothing in our knowledge of paleoclimatology suggests that natural factors could prevent us from limiting global warming to below 2°C. Only our own dithering, our own inertia can do that. Or that we prefer to be lulled into fatal complacency by the reassuring fairy tales of the “climate skeptics” rather than confronting the danger.

Among the most ill-informed claims of those “skeptics” is the assertion that climate researchers do not know or consciously ignore the fact that the climate has always changed. Utter nonsense, of course. Almost all of the authors here at Realclimate have done substantial work in paleoclimate for decades, as you can see from our publication lists (including the textbook Paleoclimatology). A lot of other climate researchers do the same. This May, three of us were at a conference of almost one thousand paleoclimatologists in Zaragoza (see photo below). These researchers know more about the natural, past climate changes than anyone else. Nobody there expressed any doubts about the ongoing human-caused global warming. On the contrary, many paleoclimatologists are particularly concerned about anthropogenic warming, especially in view of our findings about Earth’s history. Already when I was working as lead author on the paleoclimate chapter of the 4th IPCC report more than a decade ago, some of the discussions within IPCC revolved around us paleoclimatologists regarding some risks as considerably more serious than the colleagues specializing in the modern climate, such as the risk of rapid sea level rise or instability of ocean currents and ice sheets.

Whoever tells you that the fact that “the climate has always changed” is somehow reassuring, does not know what he is talking about – or he is trying to con you.

Paleoclimatologists: participants in the PAGES Open Science Meeting in Zaragoza in May 2017

243 Responses to "The climate has always changed. What do you conclude?"