Blogging has been a little light recently (apologies!), but here are a few pieces that have caught our eye this week.

First up, the Columbia Journalism Review has a two–parter on journalistic coverage of climate change inspired by comments from Jeff Huggins on the Andy Revkin’s Dot Earth blog. The key issues CJR addresses are familiar ones to readers here: how to communicate mainstream science in a way that doesn’t distort the reality of the consensus on many issues in favour of controversy on more cutting-edge topics. Definitely worth a read, and proof (if such were needed) that commenting on blogs can make a difference to coverage.

Next, the role of CO2 as a long-term climate forcing. The old CO2 lead/lag issue keeps making the rounds as a contrarian talking point (and made a brief resurgence here in comments this week) despite the fact that the existence of impact of climate on the carbon cycle in no way invalidates the impact of CO2 (as a greenhouse gas) on climate. However, there is a nice paper in Nature this week (Lunt et al, 2008) which looks at the various proposed triggers for the onset of the quaternary glaciations at the end of the Pliocene (~3 million years ago). These triggers involve, permanent El Nino events, the closing of the Isthmus of Panama, changes in orbital forcing, tectonic uplift of the Rocky mountains – and long-term decreases in CO2 as a function of very slow variations in sea floor spreading and chemical weathering. Lunt et al find that only the change in CO2 (400 ppm to 280 ppm) can explain the changes in the ice sheet. None of the other ideas come even close.

Thus, it looks very much like the climate changed radically due to this externally forced drift in CO2 (and tectonic is external for climate purposes on this timescale). As a corollary, this is an expansion of the idea we discussed a few months back, that the long term changes in the Earth system due to external forcings might be well be larger than the classical (Charney) sensitivity we often talk about.

Third. There has been a lot of discussion on energy futures in the comments – Nature had a good rundown of the scientific constraints on the different prospects. But this video is a quite entertaining discussion of why we just can’t get our heads around the issue from Dan Gilbert (h/t GH).

Finally, a commentary on the prospects for continued employment as an Arctic ice expert (h/t Climate Feedback).

This is a continuation of the previous (and now unwieldy) post on the current Arctic situation. We’ll have a proper round up in a few weeks.

A wider range of people have now started to publish relevant studies – showing clearly the value of continued research on the topic – and a key one came out this week in JGR-Atmospheres. Robock et al used a coupled GCM with interactive aerosols to see what would happen if they injected huge amounts of SO2 (the precursor of sulphate aerosols) into the tropical or Arctic stratosphere. This is the most talked about (and most feasible) geoengineering idea, based on the cooling impacts of large tropical volcanic eruptions (like Mt. Pinatubo in 1991). Bottom line? This is no panacea.
END_OF_DOCUMENT_TOKEN_TO_BE_REPLACED

The International Geological Congress (IGC) is sometimes referred to as the geologists’ equivalent of the Olympic Games and is an extremely large gathering of geologists from all over the world, taking place at 4-year intervals. This time, the IGC took place in Lillestrøm, a small place just outside Oslo, Norway (August 6-14). The congress was opened by the Norwegian King (before he continued to the real games in Beijing), and was attended by some 6,000 scientists from 113 countries. Even the Danish Minister of Energy & Climate participated in a panel discussion on climate change. In other words, this was a serious meeting.

END_OF_DOCUMENT_TOKEN_TO_BE_REPLACED 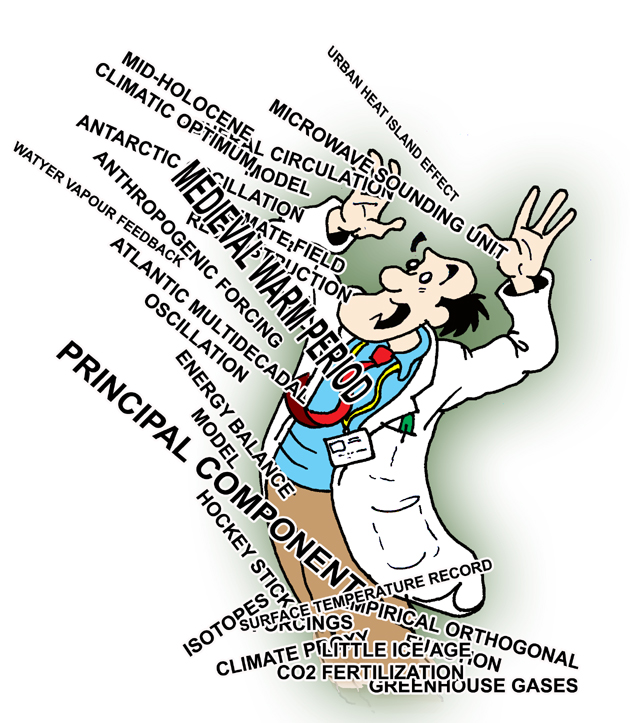 Recently we received a request for setting up a glossary-only search mechanism, or perhaps one web page with a long list of glossary entries with hot links to full explanations. The glossary that we already have is a good start, but we are all busy and it’s hard to find the time for extending this.

But there are also a number of external web pages which provide climate-related glossaries, such as the NOAA (they also have a seperate page for paleo-stuff), the Bureau of Meteorology (Australia, and there is even one by the Australian EPA), the Environmental Protection Agency (EPA, the U.S.), and the Western Regional Climate Center (WRCC, the U.S.). Wikipedia also has a glossary for climatological terms.

For those who seek the explanation for more bureaucratic terms, both the EU and the UNFCCC provide glossaries that may be useful.

Furthermore, there are some nice resources available, such as the Encyclopedia of Earth.

We often discuss the issues that arise in doing interdisciplinary work in climate science, and Liz Moyer and I have a commentary on that just out in Nature Reports Climate Change. Normally I don’t mention these kinds of pieces on the blog, but in this case the editors commissioned a nice cartoon (from Mark Roberts) illustrating our point. I liked the cartoon a lot, and so it deserves as wide an audience as possible.

A bit of context is probably useful. The three main protagonists are representative of the somewhat different foci of paleo-climatologists, climate modellers and economists. Very broadly speaking, paleo-climate science is built around the analysis of single location time series (often from holes that are drilled). Climate modellers spend a lot of time trying to see what is coming up in all its complexity, while economists tend to eschew complexity and look for insight in highly idealised situations. But in order to increase the credibility of models, they have to do well at simulating past climates and what might happen in the future is certainly informed by what has happened in the past. And in order to better understand the impacts of climate change and various proposed policies, economists will need to embrace the complexity of human-climate interactions while modellers need to better understand what aspects of climate really do make a difference. None of these things will happen if we continue to all look in different directions, and more problematically, fail to support and reward those scientists who want to bridge the divides. Sea monsters notwithstanding.