Friday marks the official start of the Atlantic hurricane season, which will be watched with interest after last year’s season broke a number of records and e.g. devastated Puerto Rico’s power grid, causing serious problems that persist today. One of us (Mike) is part of a team that has issued a seasonal forecast (see Kozar et al 2012) calling for a roughly average season in terms of overall activity (10 +/- 3 named storms), with tropical Atlantic warmth constituting a favorable factor, but predicted El Nino conditions an unfavorable factor.  Meanwhile, the first named storm, Alberto, has gone ahead without waiting for the official start of the season.

In the long term, whether we will see fewer or more tropical cyclones in the Atlantic or in other basins as a consequence of anthropogenic climate change is still much-debated. There is a mounting consensus, however, that we will see more intense hurricanes. So let us revisit the question of whether global warming is leading to more intense tropical storms. Let’s take a step back and look at this issue globally, not just for the Atlantic. END_OF_DOCUMENT_TOKEN_TO_BE_REPLACED

A few weeks ago, we’ve argued in a paper in Nature that the Atlantic overturning circulation (sometimes popularly dubbed the Gulf Stream System) has weakened significantly since the late 19th Century, with most of the decline happening since the mid-20th Century. We have since received much praise for our study from colleagues around the world (thanks for that). But there were also some questions and criticisms in the media, so I’d like to present a forum here for discussing these questions and hope that others (particularly those with a different view) will weigh in in the comments section below. END_OF_DOCUMENT_TOKEN_TO_BE_REPLACED

END_OF_DOCUMENT_TOKEN_TO_BE_REPLACED

Another year, another ice out date. As in previous years, here’s an update of the Nenana Ice Classic time series (raw date, and then with a small adjustment for the calendrical variations in ‘spring’). One time series doesn’t prove much, but this is of course part of a much larger archive of phenomenological climate-related data that I’ve talked about before.

This year the ice on the Tanana River went out on May 1st, oddly enough the same date as last year, after another very warm (but quite snowy) Alaskan winter. 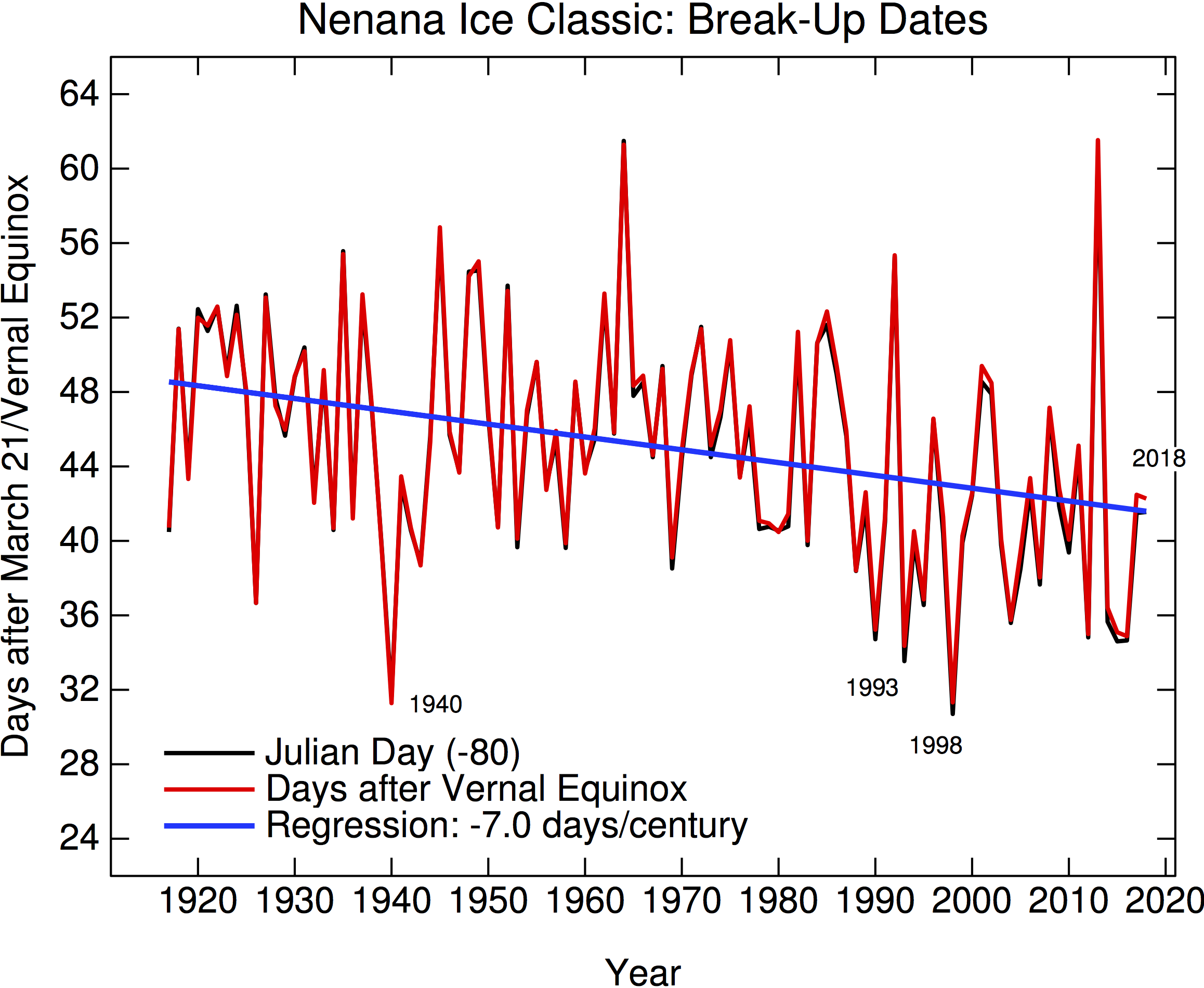 My shadow bet on whether any climate contrarian site will mention this dataset remains in play (none have since 2013 which was an record late year). [Update: It was mentioned on WUWT!]