You are here: Home / Search for "courtillot"

This article continues the critique of writings on climate change by Allègre and Courtillot, started in Part I . If you would like to read either post in French, please click on the flag icon beside the post title above.

…which of course is a paraphrase of Bill Clinton’s famous quote regarding the economy. We put the last word in small letters since we’ve learned that it is not a good debating technique to imply (even inadvertently) that those who are having trouble seeing the force of our arguments might be stupid. What we wish to emphasize by this paraphrase is the simple fact that the expectation of a causal link between increasing long-lived greenhouse gases (like CO2) and increasing temperature does not rest on some vague, unexplained correlation between 20th century temperature and 20th century greenhouse gas concentration.

The anticipated increase in temperature was predicted long before it was detectable in the atmosphere, indeed long before it was known that atmospheric CO2 really was increasing; it was first predicted by Arrhenius in 1896 using extremely simple radiation balance ideas, and was reproduced using modern radiation physics by Manabe and co-workers in the 1960’s. Neither of these predictions rests on general circulation models, which came in during subsequent decades and made more detailed forecasts possible.

Still, the basic prediction of warming is founded on very fundamental physical principles relating to infrared absorption by greenhouse gases, theory of blackbody radiation, and atmospheric moist thermodynamics. All these individual elements have been verified to high accuracy in laboratory experiments and field observations. For a time, there was some remaining uncertainty about whether water vapor feedback would amplify warming in the way hypothesized in the early energy balance models, but a decade or two of additional observational and theoretical work has shown that there is no real reason to doubt the way in which general circulation models calculate the feedback. When modified by inclusion of the cooling effect of anthropogenic aerosols, the theory gives a satisfactory account of the pattern of 20th and 21st century temperature change.

No other theory based on quantified physical principles has been able to do the same. If somebody comes along and has the bright idea that, say, global warming is caused by phlogiston raining down from the Moon, that does not make everything we know about thermodynamics, infrared absorption, energy balance, and temperature suddenly go away. Rather, it is the job of the phlogiston advocate to quantify the effects of phlogiston on energy balance, and incorporate them in a consistent way beside the existing climate forcings. Virtually all of the attempts to poke holes in the anthropogenic greenhouse theory lose sight of this simple and unassailable principle.

In a paper entitled "Are there connections between the Earth’s magnetic field and climate?" published recently in Earth and Planetary Science Letters, Courtillot and co-authors attempt to cast doubt on carbon dioxide as a primary driver of recent (and presumably future) climate change; he argues instead that fluctuations in the Earth’s magnetic field (partly driven by solar variability) have an important and neglected role. Like most work of this genre, it is carried out in an intellectual void — as if everything we know currently about physics of climate had to be set aside in order to make way for one new (or in fact not-so-new) idea. But the problems don’t end there. With the help of a Comment published by Bard and Delaygue (available here at EPSL or here as pdf) , we’ll expose a pattern of suspicious errors and omissions that pervades Courtillot’s paper. Sloppiness and ignorance is by far the most charitable interpretation that can be placed on this pattern.

END_OF_DOCUMENT_TOKEN_TO_BE_REPLACED

France has a per capita carbon emission of 1.64 tonnes, compared to 2.67 tonnes for the U.K and 5.61 tonnes for the US. So, if anybody has earned the right to rest on their laurels and pontificate to the rest of the developed world about what they should be doing, you’d think it would be France. Far from it, under the leadership of Nicolas Sarkozy, France has embarked on an ambitious program of deeper carbon reductions. In introducing the measures, Sarkozy said "The guiding principle is that the cost to the climate — the carbon cost — will be integrated into planning of all major public projects, and into all deliberations affecting the public." These measures include: a commitment that all new buildings would be net energy producers by 2020, incandescent lighting would be banned by 2010, buyers of efficient vehicles would be subsidized, drivers of inefficient vehicles would be penalized, and road construction would be severely curtailed in favor of expanded rail travel using state-of-the-art French TGV technology. A carbon tax is also being seriously contemplated. These proposals are the result of an intensive months-long series of discussions with scientists and stakeholders such as environmental nongovernmental organizations, industry representatives, and labor union representatives. The process, known as Le Grenelle de l’Environnement, was described here by Nature (subscription required) and a summary of some of Sarkozy’s proposed actions was reported in the press here.

All the same, there has been some pushback from a vocal pair of highly decorated French academicians, Claude Allègre being the most prominent and noisiest of the two. In recent years, Vincent Courtillot has emerged as a reliable sidekick to Allègre — a Dupont to his Dupond — helping to propagate Allègre’s claims and adding a few of his own. Both are members of the Académie des Sciences, and Allègre has been awarded both the Crafoord Prize and Bowie Medal. Allègre has an impressive list of publications relating to the Earth’s interior, and besides that was Minister for Education, Research and Technology in the Jospin government. Courtillot — currently director of the Institut de Physique du Globe de Paris (IPGP) — has had a distinguished record of research on fundamental aspects of geomagnetism and is currently President of the Geomagnetism and Paleomagnetism Section of the American Geophysical Union. Their views were amply (some would say more than amply) represented at a symposium on the IPCC report, held last Spring at the Academie (See the issue "Evolution des Climats" of La Lettre de l’Académie des sciences, and press reports in Le Figaro, Le Monde, and Liberation). What does all this mean? Are the opinions of Allègre and Courtillot founded on some special profound insight that has escaped the notice of the community of scientists who have devoted entire careers to studying climate? Let’s take a look.

END_OF_DOCUMENT_TOKEN_TO_BE_REPLACED

Some parts of the blogosphere, headed up by CEI (“CO2: They call it pollution, we call it life!“), are all a-twitter over an apparently “suppressed” document that supposedly undermines the EPA Endangerment finding about human emissions of carbon dioxide and a basket of other greenhouse gases. Well a draft of this “suppressed” document has been released and we can now all read this allegedly devastating critique of the EPA science. Let’s take a look…

END_OF_DOCUMENT_TOKEN_TO_BE_REPLACED

Ptarmigans are Back! Fans of the Sheep Albedo Feedback will remember these little fellows over on the right (photo credit: Ken Tape) from the immortal paper by Squeak and Diddlesworth on the influence of ptarmigan populations on the Laurentide Ice Sheet. 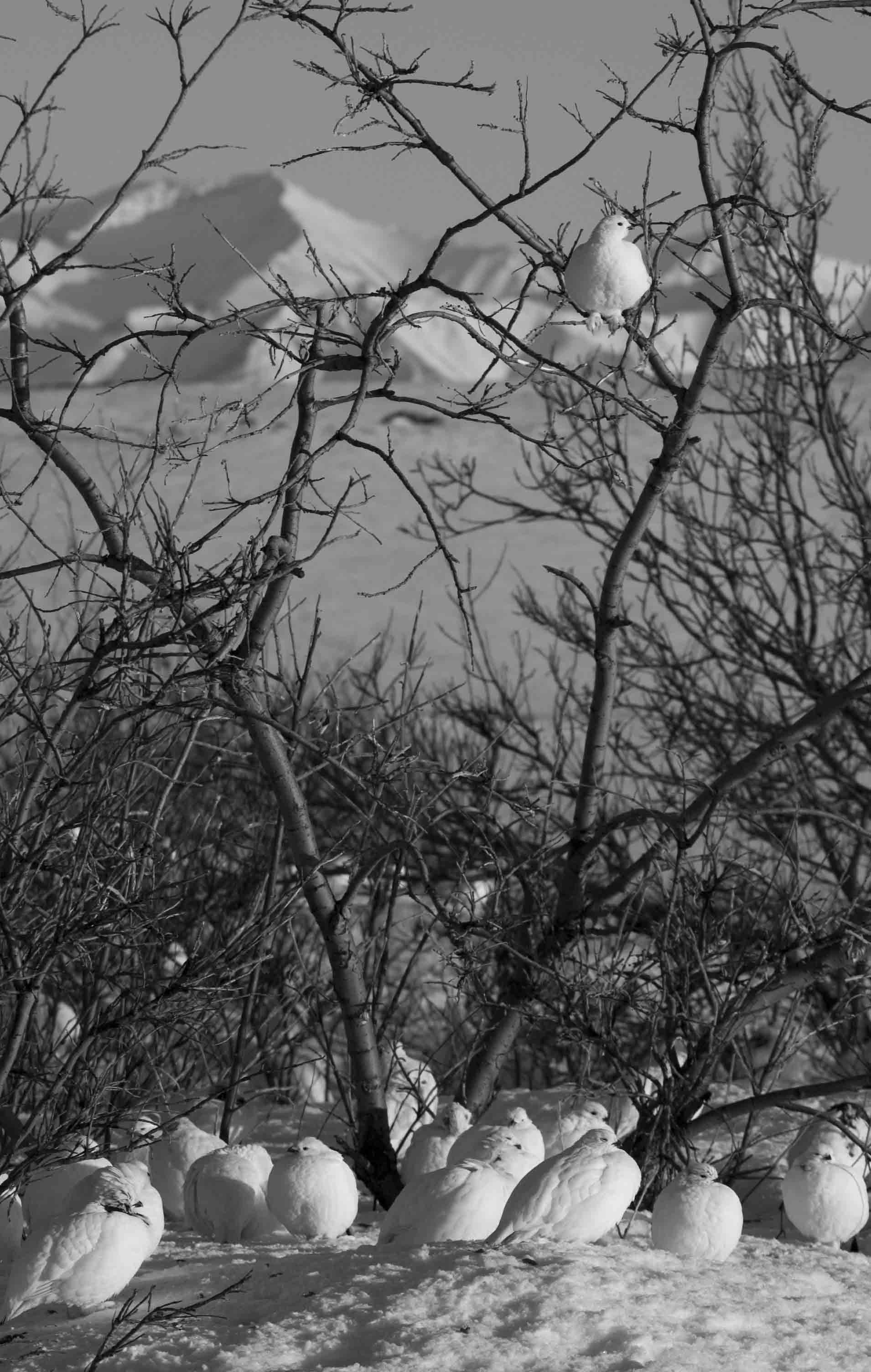 In Session C33A on Wednesday, Ken Tape of the University of Alaska presented a paper on the influence of ptarmigan grazing on shrubbification of the Alaskan tundra. It seems that when there is deep snow cover, ptarmigan browsing is concentrated on those few willows that stick up above the snow. They eat the buds, which inhibits willow growth. These tall willows are the ones that have managed to benefit most by climate warming, but the ptarmigan provide a stabilizing feedback, up to a point. An interesting thing is the ptarmigan don’t like to perch. 98% of the winter buds within a half meter of the snow surface get eaten, but only 48% of the buds above that browse level. So, if the shrubs grow fast enough to get above the browse level, they can beat the ptarmigans. This seems to be happening more and more.
END_OF_DOCUMENT_TOKEN_TO_BE_REPLACED