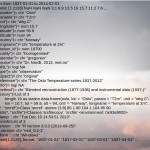 “These results are quite strange”, my colleague told me. He analysed some of the recent climate model results from an experiment known by the cryptic name ‘CMIP5‘. It turned out that the results were ok, but we had made an error when reading and processing the model output. The particular climate model that initially gave the strange results had used a different calendar set-up to the previous models we had examined.

END_OF_DOCUMENT_TOKEN_TO_BE_REPLACED

I was disappointed by the recent summary for policymakers (SPM) of the intergovernmental panel on climate change (IPCC) assessment report 5, now that I finally got around to read it. Not so much because of the science, but because the way it presented the science.

The report was written by top scientists, so what went wrong?

END_OF_DOCUMENT_TOKEN_TO_BE_REPLACED

We now have many different climate models, many different methods, and get a range of different results. They provide what we call ‘multi-model‘ and ‘multi-method‘ ensembles. But how do we make sense out of all this information?

END_OF_DOCUMENT_TOKEN_TO_BE_REPLACED

No doubt, our climate system is complex and messy. Still, we can sometimes make some inferences about it based on well-known physical principles. Indeed, the beauty of physics is that a complex systems can be reduced into simple terms that can be quantified, and the essential aspects understood.

A recent paper by Sloan and Wolfendale (2013) provides an example where they derive a simple conceptual model of how the greenhouse effect works from first principles. They show the story behind the expression saying that a doubling in CO2 should increase the forcing by a factor of 1+log|2|/log|CO2|. I have a fondness for such simple conceptual models (e.g. I’ve made my own attempt posted at arXiv) because they provide a general picture of the essence – of course their precision is limited by their simplicity.

END_OF_DOCUMENT_TOKEN_TO_BE_REPLACED

Some will be luckier than others when it comes to climate change. The effects of a climate change on me will depend on where I live. In some regions, changes may not be as noticeable as in others. So what are the impacts in my region?

END_OF_DOCUMENT_TOKEN_TO_BE_REPLACED

A new report on extreme climate events in Europe is just published: ‘Extreme Weather Events in Europe: preparing for climate change adaptation‘. It was launched in Oslo on October 24th by the Norwegian Academy of Science and Letters, and the report is now available online.

What’s new? The new report provides information that is more specific to Europe than the SREX report from the Intergovernmental Panel on Climate Change (IPCC), and incorporate phenomena that have not been widely covered.

It provides some compelling information drawn from the insurance industry, and indeed, a representative from Munich Re participated in writing this report. There is also material on convective storms, hail, lightening, and cold snaps, and the report provides a background on extreme value statistics, risk analysis, impacts, and adaptation.

END_OF_DOCUMENT_TOKEN_TO_BE_REPLACED

A while ago, I received a request to publish a paper on a post that I had written here on RealClimate, exposing the flaws in the analysis of Humlum et al., (2011).

Instead of writing a comment to one paper, however, I thought it might be useful to collect a sample of papers that I found unconvincing (usual suspects), and that have had a fairly high public profile.

END_OF_DOCUMENT_TOKEN_TO_BE_REPLACED

There has been an unusual surge of interest in the climate sensitivity based on the last decade’s worth of temperature measurements, and a lengthy story in the Economist tries to argue that the climate sensitivity may be lower than previously estimated. I think its conclusion is somewhat misguided because it missed some important pieces of information (also see skepticalscience’s take on this story here).

While the Economist referred to some unpublished work, it missed a new paper by Balmaseda et al. (2013) which provides a more in-depth insight. Balmaseda et al suggest that the recent years may not have much effect on the climate sensitivity after all, and according to their analysis, it is the winds blowing over the oceans that may be responsible for the ‘slow-down’ presented in the Economist.

END_OF_DOCUMENT_TOKEN_TO_BE_REPLACED

Climate information for the future is usually presented in the form of scenarios: plausible and consistent descriptions of future climate without probability information. This suffices for many purposes, but for the near term, say up to 2050, scenarios of emissions of greenhouse gases do not diverge much and we could work towards climate forecasts: calibrated probability distributions of the climate in the future.

This would be a logical extension of the weather, seasonal and decadal forecasts in existence or being developed (Palmer, BAMS, 2008). In these fields a fundamental forecast property is reliability: when the forecast probability of rain tomorrow is 60%, it should rain on 60% of all days with such a forecast.

This is routinely checked: before a new model version is introduced a period in the past is re-forecast and it is verified that this indeed holds. In seasonal forecasting a reliable forecast is often constructed on the basis of a multi-model ensemble, as forecast systems tend to be overconfident (they underestimate the actual uncertainties).

END_OF_DOCUMENT_TOKEN_TO_BE_REPLACED

RCMs provide important input to many climate services, for which there is a great deal of vested interest on all levels. On the international stage, high-level talks lead to the establishment of a Global Framework for Climate Services (GFCS) during the World Climate Conference 3 (WCC3) in Geneva 2009.